With the news of Tom Brady's restructure deal hot off the books, many will clamor for the Bears to do the same. The problem is, the best contracts for restructuring have their own particular problems in store.

Share All sharing options for: Contract restructures could prove to be a big headache for the Chicago Bears

Tom Brady got himself a deal, huh? Per Pro Football Talk, here's the skinny on that one:

Per a source with knowledge of the contract, Brady received a $30 million signing bonus. He’ll also receive a base salary of $1 million this year and $2 million in 2014.

The deal actually frees up some current cap for the Patriots (nearly $8 million) , and will simultaneously net Brady more money than he was originally going to earn over the next two years. A win-win, right?

Now, the Bears aren't in terrible shape, but some cap room would always be great, right? So obviously the Bears should look into restructuring some of their biggest cap hits to make some room and get the personnel they need.

T.J. Shouse: The basics of a contract restructure

Not so fast, though. Let's take a look at some of the issues that could affect the Bears in that regard. 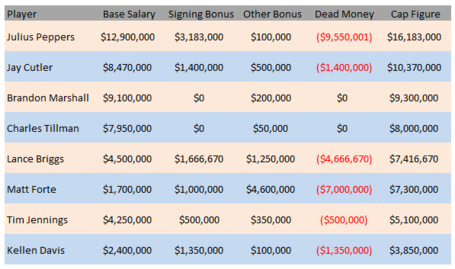 Above, you'll find the top eight cap hits for the Chicago Bears in the 2013 season. What kind of factors could influence the ability to restructure these deals? We'll start at the bottom and work up.

Kellen Davis - Theoretical no-brainer. Cut him, eat the bonus, save the base salary. Not hard, and incredibly likely should they choose to bolster the position in free agency or the draft.

Tim Jennings - Possible and likely. Involves committing to Jennings for a few more years, and would likely involve spreading most of that signing bonus over several years. The problem is that a three year deal or more would be required to see a notable cap savings, and you have to wonder if he will maintain the level of performance that tripped his escalator in the first place.

The problem is that a three year deal or more would be required to see a notable cap savings, and you have to wonder if he will maintain the level of performance that tripped his escalator in the first place.

Matt Forte - Nothing to really be done here...you're paying the price of overpaying him in 2012.

Lance Briggs - Lance is the king of the restructured deal. You could restructure again, but you're not going to pull enough benefits out of it, especially as he's getting somewhat older.

Charles Tillman - A restructure dream---while getting older, you're looking at a cap hit made almost entirely of base salary. Knock that down to a base salary of 1 million this year, 1.5 next year, and 2 million in a third year, and a $7-$8 million signing bonus. That'd knock the cap hit this year down to $3.3mil-$3.6mil instead of $8mil, and free up a lot of cap space. With the anticipated cap ceiling going up in 2015, you could even plan for that and spread it out a little more.

Brandon Marshall - This is where things start to get a little muddy, and it's not necessarily from a financial world. The guy is the best receiver on your team, by far. You're not going to cut him. He's got a $9.1 million base salary in each of the last two years of his contract. And he also happens to be football buddies with the next guy on the list. You could restructure his deal fairly easily--but he might want to know the condition of the next guy on the list. Negotiations could be trouble without a decision made on...

Jay Cutler - In the final year of his contract, under a normal quarterback scenario, it would make perfect sense. Restructure his deal, alleviate that base salary, spread a big signing bonus across four-five years, and everyone is happy. But the Bears are never normal. With an all new-coaching regime, they're hesitant to commit to a guy who has had a severe number of ups and downs during his tenure. So you can't figure to save anything there, unless you're willing to step up and say that he is your man for the next four-five years.

Julius Peppers - The biggest cap hit, by far, is Peppers. If they could convert some of that base money to another signing bonus, they could free up a significant amount of cap space, but then they're paying a bonus for a guy on the wrong side of 30, who while still impactful, is not the guy they paid for when they first signed him.

As you can see, restructuring isn't as easy as talking the player into taking less money. Particularly when the factors involved aren't just financial. The Bears front office, as of late, have been pretty solid in structuring fair deals for players. Let's hope that trend holds true now.