As we've seen over the last couple of weeks, Raiders head coach Bill Callahan and offensive coordinator Marc Trestman knew how to put points on the board. The 2002 Raiders dominated their opponents in the scoring column on their way to an 11-5 record. Former Raiders HC Jon Gruden, however, knew just how to deploy his #1 defense to stop the Raiders in their tracks. Here's how Monte Kiffin, Rod Marinelli, and Tony Dungy's defense put this Super Bowl away before halftime.

Disrupt the QB, Derail the Offense

The West Coast Offense is all about quick passes, so the conventional wisdom is that it can help mask problems along the offensive line. The Bucs knocked that wisdom to the turf with the specific ways they put pressure on QB Rich Gannon. Take a look at this play on the Raiders' first drive of the game: 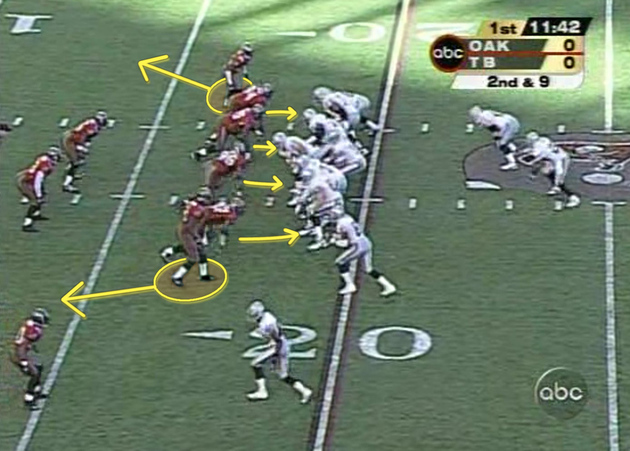 Tampa Bay defensive line coach Rod Marinelli is well-known for the stunts he runs with his rushmen, but the Bucs didn't run a single stunt in the first half. This is by design, of course - a major key to stopping the West Coast Offense is disrupting its quick passes. Stunts take time to develop, so the Bucs opted to take the fastest route into the backfield every single down. Here, the Bucs tried to get extra mileage out of their four-man rush by confusing the offensive line with the two "blitzers" highlighted above. The blitzers fall back into coverage, but on this particular down, even four rushers was one too many for the Raiders to handle: 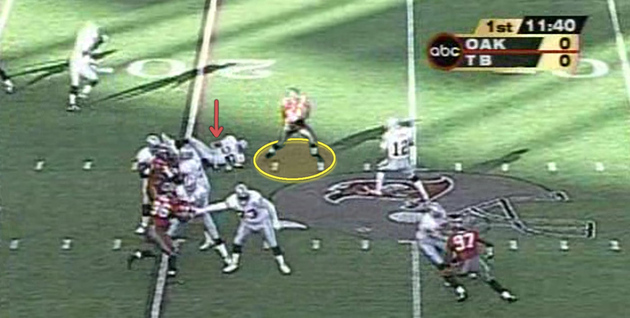 The red arrow is pointing out the poor RT, who watched Rich Gannon run for his life from a comfortable seat on the turf. The QB is able to scramble his way into a two-yard gain, but two-yard scrambles don't put six on the board.

The play at left tackle wasn't much better. Here's the very next play: 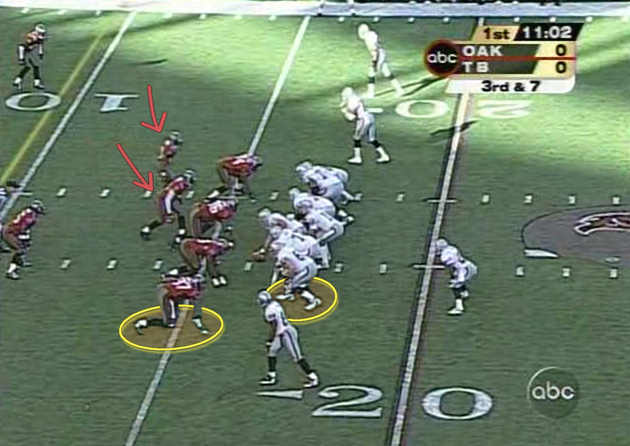 Again, the Bucs show blitz here - notice the large red arrows pointing out the extra men menacing the offensive line. The real action, however, is out of the left side. Since the whole line shifted its blocking to the right to account for the potential blitz, the LT was on the proverbial island for this play. And as the next look shows, that island was not going at Disney: 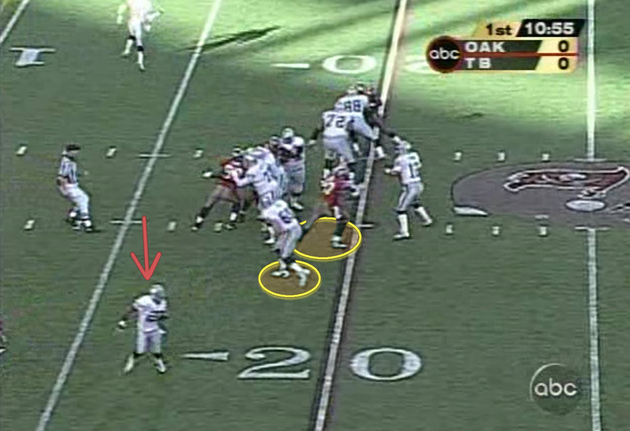 While Mikes Martz and Tice weren't afraid of using the running back as an extra blocker on passing downs, Marc Trestman prefers to use his RB as an extra passing option. We see RB Charlie Garner under the red arrow, looking back for a ball that never arrives. Gannon's pass-blocking was so bad that even the quick passes weren't available to him. By knocking Oakland's offense out of sync with these speed-rushes, the Bucs were able to disrupt both the timing and the passing lanes that the Raiders needed to succeed.

It's no big secret that the Raiders liked to pass the ball. A lot. Indeed, the Bucs could have simply played their Tampa 2 all game to defend against this obvious passing threat. Gruden knew better, though. To beat the West Coast Offense, his team had to be aggressive against the run as well. Here's the first down play from the series we just looked at: 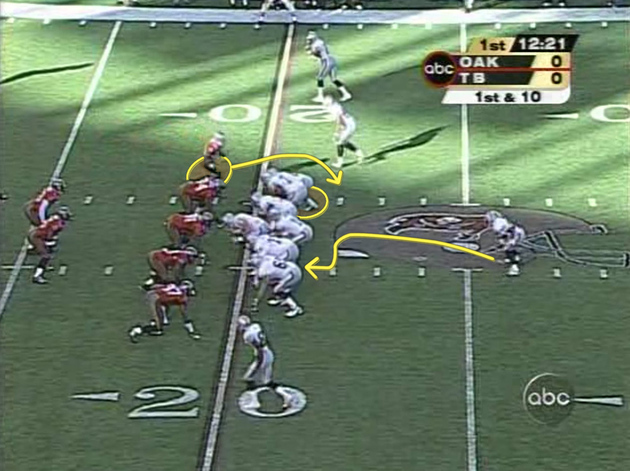 While the three wide receivers might suggest a pass, the highlighted Raider is an extra 330+ lb. linesman - the Bucs were right to play the run first against such a formation. Instead of countering the Raiders' extra weight with some bulk of their own, Tampa Bay again countered size with speed. They brought a defensive back down to line up across from the TE, and simply had him run around the extra blocker. Charlie Garner was supposed to run directly behind this extra blocker, but the speedy DB forced him to cut back towards the inside. The Bucs defensive line proved stout, all conspiracy theories aside, and the run play went for only a single yard. With the Raiders now in second and long, the Bucs successfully set up for the QB pressures and sacks we saw above. Stop what little run game that Trestman uses, and he'll be forced to put his QB in danger.

Rich Gannon was the NFL MVP in 2002, but he looked more like a Rex Grossman than a Peyton Manning in this Super Bowl. While Trestman's passes are generally for short yardage, he does give his QB the option to stretch the field with the deep ball. It's up the QB to stretch the field at the right times, however. This next play was not one of those times: 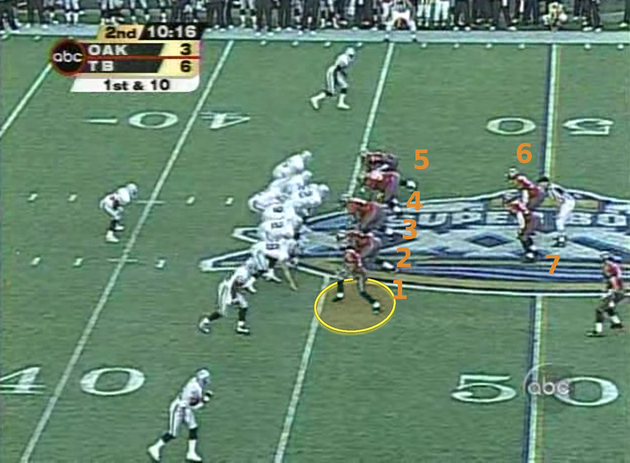 Gannon looked over and saw the highlighted Buccaneer showing blitz. Since this "Player 1" was safety Ronde Barber, Gannon assumed that this meant that there were eight defenders in the box. Eight in the box means three defenders left to cover three receivers, making it the perfect time to launch a bomb. A quick count of the defensive front shows Gannon's mistake: the Bucs are in a nickel and still had four DBs in coverage. With a defender on each receiver and a safety playing Cover 1, they were well prepared for the long ball Gannon unleashed. 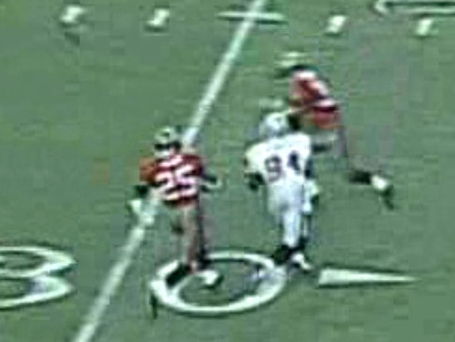 This stroll down Super Bowl Memory Lane would be exactly that, except the Bears have two tackles who struggle in pass protection and a quarterback with a tendency towards ill-advised throws. Yes, it is true that the 2002 Buccaneers defense is considered one of the best in recent NFL history. Still, it will be up to offensive line coach Aaron Kromer to make sure that every defense doesn't end up looking like the '02 Bucs because of poor offensive line play. As to Jay Cutler's interception issues, that problem is Trestman's to fix.

Is Marc Trestman an offensive guru? The tape does point to "yes." Scheme alone cannot magically make up for a lack of talent, however. History suggests Trestman can do better than the coaches he replaced, but I won't be buying tickets to the Super Bowl just yet.