Three routes all on one side of the field - a defense can't stop them all. Here's how Marc Trestman replaces the run game with the pass.

While there is still plenty of room for speculation as to what Marc Trestman's offense will look like come August, there's little question that he will be relying on many of the same basic concepts that informed his version of the West Coast Offense that he ran in Oakland. Watching one of Oakland's marquee games from their 2002 season, their "tuck this!" rematch against the Patriots, one of the biggest tendencies I noticed in the Raiders' playcalling was their love of the three-receiver alignment.

Every good offensive play is designed to create some sort of mismatch or numbers advantage against the defense, and Trestman's playbook is full of plays that open up a defense by sending three receivers to one side of the field. He did this frequently in the CFL, but it's not a trick that he learned up north. Witness the very first offensive snap by the Raiders in their game against New England: 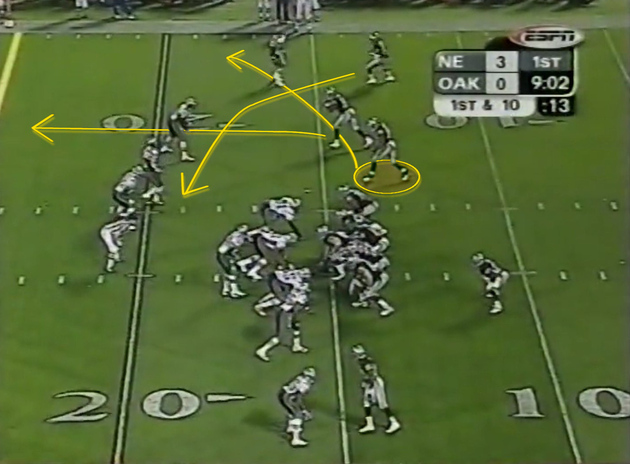 It's no secret that the Raiders wanted to throw the ball early based on this alignment. Indeed, they ended up throwing ten passes to one run to open this game up. This first pass isn't going to be a deep one, though: the West Coast is all about short, high-percentage throws. Raiders QB Rich Gannon isn't even going to look at his deep options on this one, but the defense doesn't have that luxury. With the defense forced to follow the slant and the go routes, the highlighted slot receiver - TE Roland Williams - will be wide open for a short but guaranteed completion. See him highlighted again as the play develops: 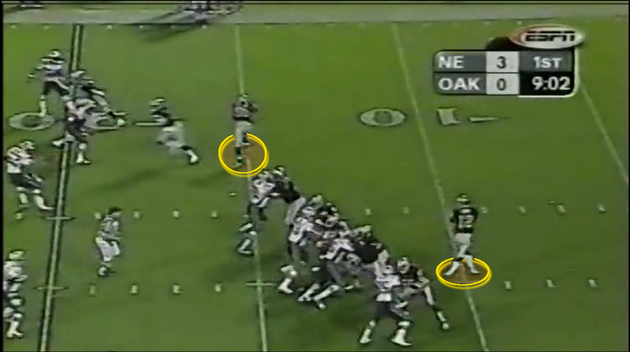 It's often said that in the WCO the short passing game replaces the run game, and this play is a perfect example of what that means in practice - a short yardage play that dares the defense to bring more defenders up front. Trestman took this whole "pass as run" concept an extra yard on this one, bringing in a blocker to help rack up extra yards after the catch. On this final look, you can see that RB Charlie Garner sneaked his way across the formation and is in a perfect position to throw a block for his tight end after the catch is made. 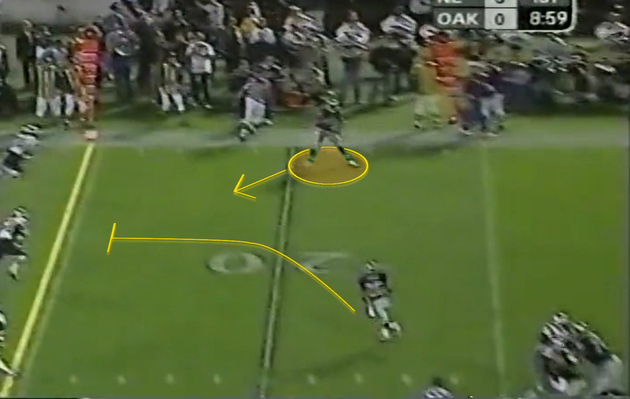 Garner's block helps Williams move the ball an extra couple of yards on this one. It's not getting off the bus running, sure, but it got the offense running.

As the game progressed, Trestman broke out some of his many variations on this theme. Here's one from later in the first quarter. 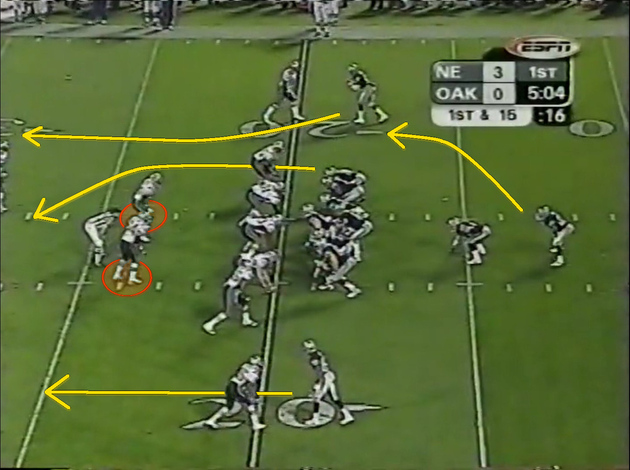 With the Raiders in a standard pro set (2 WR, TE, RB, FB), it's not immediately obvious that their intent is to run three pass patterns to the right. Despite the different alignment, the play itself is almost identical in execution. There's a slant to hold the two linebackers (highlighted) in their places, a go route to clear out the cornerback, and then someone will head into the flat and be wide open. This time, that someone is RB Charlie Garner, who comes out of the backfield on a wheel route: 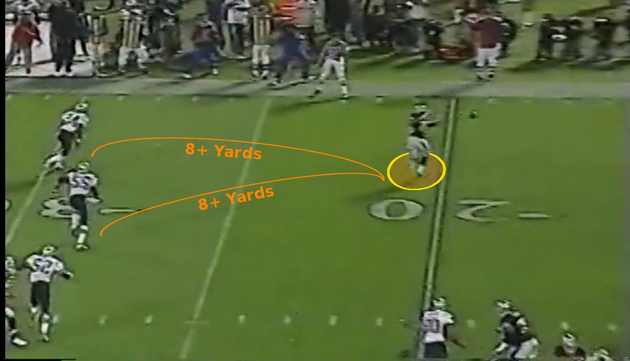 Instead of directly handing Garner the ball and having him immediately pursued by linebackers, Trestman has distracted the linebackers long enough to get Garner in open space. It's another easy completion, and the Raiders ended up with a nice gain of five yards. Again, these short passing patterns worked just as well as the run game.

Now, you might be thinking that the defense should just hold a linebacker at the line of scrimmage to stop these plays. You would not be alone in thinking that, because that is exactly what Trestman wants the defense to do on this next play. In the game so far, every ball has been thrown to the shortest route on the three-receiver side. The Patriots defense should be completely keyed in to the three-wide side of the field. 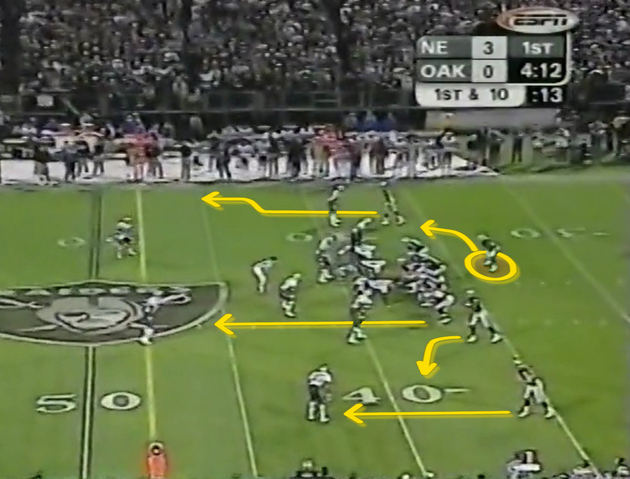 We see the same combination of two clearing routes and one underneath route on the left side of the offensive formation, but that's there merely to distract the Patriots linebackers. With the right side cornerback forced to follow Jerry Rice on his go route and the linebackers tending towards the opposite side of the field, Charlie Garner is once again able to sneak out of the backfield almost unnoticed. 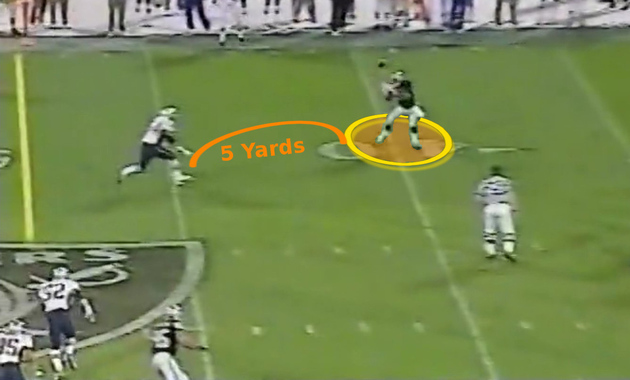 He dropped this somewhat off-target pass, but the play itself was sound. If Garner makes this catch and then put a move on the onrushing Tedy Bruschi, he would have had an easy first down. And even if Garner wasn't able to shake the wily old linebacker, the Raiders would have had a three-yard gain at minimum - again, just as good as your average run play.

Matt Forte might not be getting as many handoffs as he used to, but as you can see, his yards from scrimmage numbers will not suffer in Marc Trestman's pass-happy offense. With a perfect decoy in Brandon Marshall, Trestman will be able to get Matt Forte open on these underneath routes all day. Add in a new tight end, and this offense could really hum along. Next week, I'll take a look at what all these short routes build towards - the answer may surprise you. The week after that, it'll be time to sneak a peak at Trestman's bag of trick plays. It may be the off-season, but the tape keeps rolling...