J'Marcus Webb would like to know if his feet look ugly

It's the offseason, and everyone has access to the internet and social media. Even professional sports players.

It was only in recent days that the Chicago Bears signed the left tackle of their future in Jermon Bushrod, and judging by his press conference, he's all business.

Bushrod talked about honing his craft, being the best that he can be, and really came across as a professional in every sense of the word. If you want the full audio of that introductory presser, click HERE.

"It's a ride or die for my JWebb. Ride with him or die trying to!" -Camera Gyrl

The Pro Bowl left tackle will supplant J'Marcus Webb at that position, and general manager Phil Emery stated that Webb will have the opportunity to compete at right tackle for the 2013 season. It's always good to have your two solid starters, and a swing tackle or two to step in when injuries occur.

Webb is known for his social media presence, primarily operated by a lady that calls herself Camera Gyrl. From her Twitter profile: "It's a ride or die for my JWebb. Ride with him or die trying to!"

She posts to his Twitter and Facebook feeds on his behalf, often times without making much sense, and decided it was best to block me back during the 2012 NFL season. You see, Camera Gyrl decided to send out some tweets, as Webb, in the middle of a regular season game (something to do with a restaurant), and I pointed out to her that it might not be the best idea, considering the league does not allow players to use social media starting 90 minutes before a game kicks off. I wasn't unfriendly... It was just a 'heads up' type of post.

In coming months, Webb tweeted about various fast food runs in the middle of the night, and eventually was arrested for marijuana and paraphernalia. You can read about that HERE. Many fans took issue with his social media presence, and his approach with engaging the fanbase, but nothing really changed.

Needless to say, either Webb or Gyrl decided to upload a bunch of photos to the internet Thursday night, and tweeted about it incessantly. Here is what his timeline looked like: 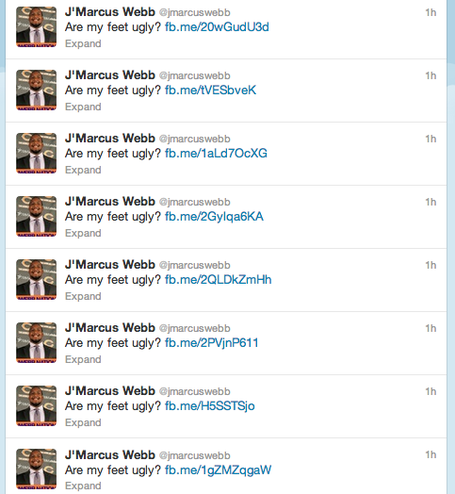 I won't be that fan that has the mentality of "Why are you tweeting? You should be working out!", because that is dumb, but for a guy who has struggled to perform on the field, then gets arrested, and then supplanted from his starting role... Well... I guess it is the offseason.

There's a time for work, and a time for play, and we can only hope that Bushrod's work ethic and professionalism can help influence his peers.