While we'll have to wait to see just how good he looks in Bears blue, new Bears acquisition TE Martellus Bennett got a chance to show his stuff when his Giants faced the Packers in Week 12. Here's how he did.

In a West Coast Offense like Marc Trestman's, the first duty of a tight end is to block. Don't take my word for it, though. Here's how Bill Walsh started his summary of an ideal tight end:

There are those who believe that a tight end with ballast and strength and girth is key to their offensive system because he has as important a role as a blocker as there is. If the tight end can block a defensive lineman on the edge of the offense, then you automatically have a running game just with that single feature.

The Giants proved the truth of this last statement when they faced the Green Bay Packers last season. Bennett made some plays in the passing game - 3 catches for 44 yards - but his best work was done in the trenches.

On first and goal from the Packers 3, the Giants used every one of Martellus Bennett's skills on the edge. First up was the chip block, and Bennett started the play by pushing down DE Erik Walden on his way off the line. 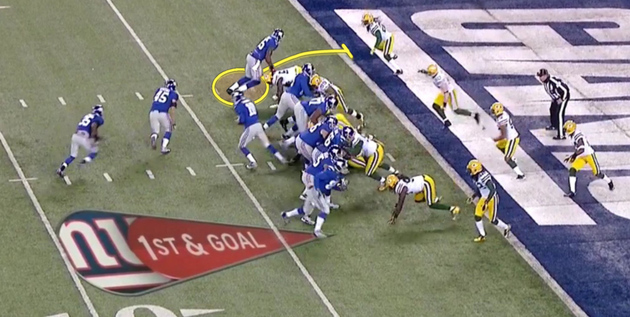 Bennett's quick block sets up this read play. If the defensive end gets up and engages the fullback, Manning can hand the ball off to his running back. Then, assuming Bennett's block on Packer Tramon Williams holds, the RB could then walk in for six. If the defensive end instead decides to go straight after the QB - which he does - the RB can block the DE while the fullback comes open in the flat. 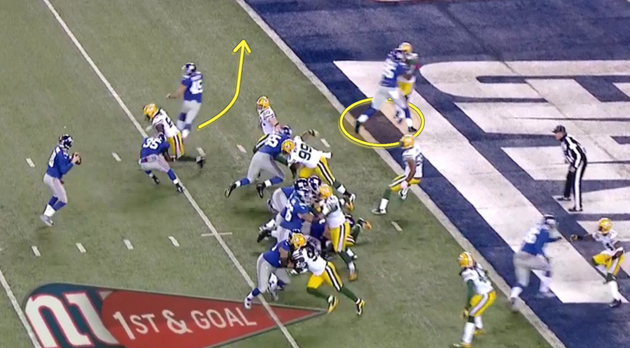 In this second look, Bennett lays a perfect downfield block on Williams. The flat comes open, and it stays that way when Bennett heads out on back-corner fade route - Williams has to stay deep. Too bad the Giants got bad Eli on this one, because he missed the wide open Henry Hynoski, but Bennett held up his end of the bargain.

Bennett's blocking was just as effective at the line of scrimmage in this next play, another short-yardage scenario. Bennett starts with a motion from the sideline to the slot, setting him up to block edge defender Mike Daniels: 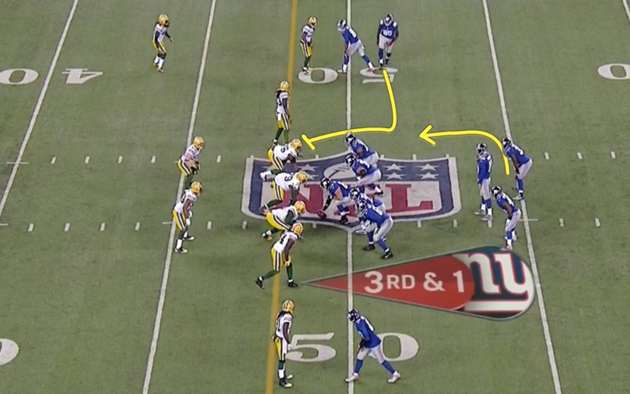 It's hard to get a good camera angle on what happens in the scrum that develops at the point of attack on this play, but you can see how effective Bennett's block was by what happens to the 294-pound Daniels: 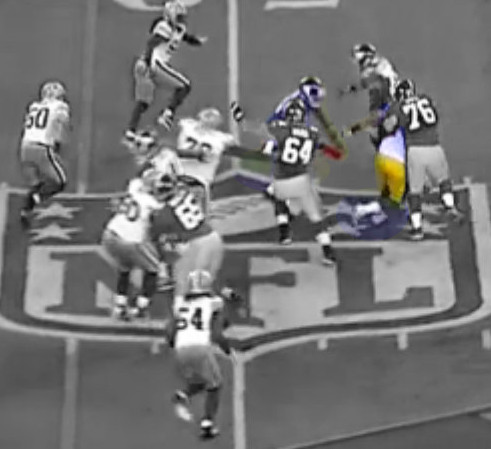 With Daniels kissing the turf, Bennett looks for the next man to block. He finds DT Ryan Pickett and helps to escort him out of the play: 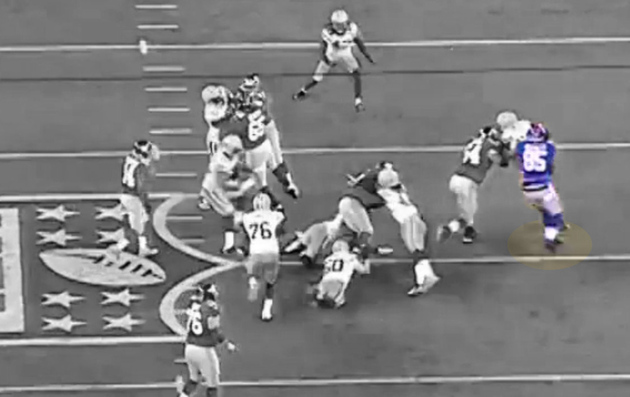 The Giants put a lot of stock in Martellus Bennett's blocking skills. They routinely put him on an island to deal with whatever edge-rusher Dom Capers sent his way, and for the most part, Bennett's stock paid dividends. Here's one play where Bennett holds the edge against Dezman Moses while the run goes up the middle: 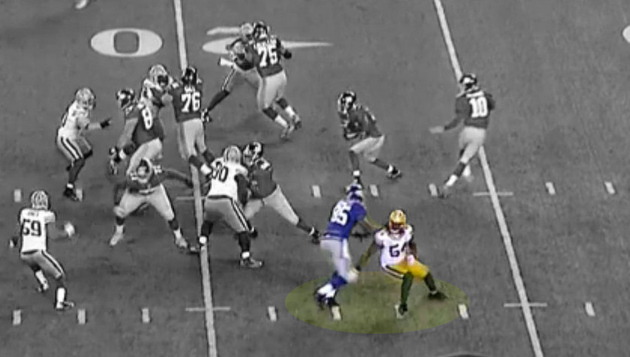 Sure, Moses is a poor replacement for the injured Clay Matthews, but he's got speed enough to get around a weak block. He comes after Bennett with a quick burst then tries a spin move or two. By the time Moses has finally gotten leverage in this shot, the play has passed him by. Chalk one up for Bennett.

Moses evened the score later in the game. On a strong-side run play, he comes hard at Bennett's outside shoulder. Bennett gets twisted around, and Moses gets past: 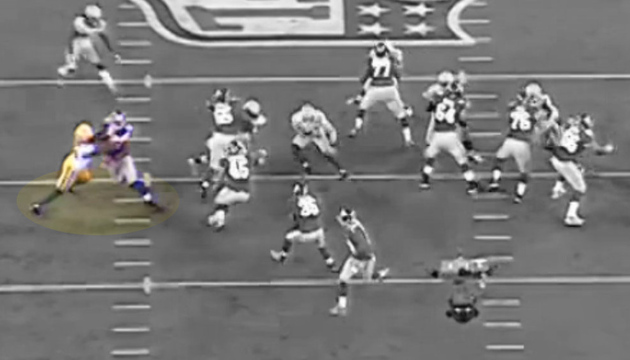 With his shoulders turned almost parallel to the sidelines on this one, there was no way Bennett could keep his leverage. Moses cut past him and dropped Hynoski for a gain of only two.

On this next play, however, Bennett's technique was more sound. He gets square to his target - DE Erik Walden - engages, and pushes the defender off his point. 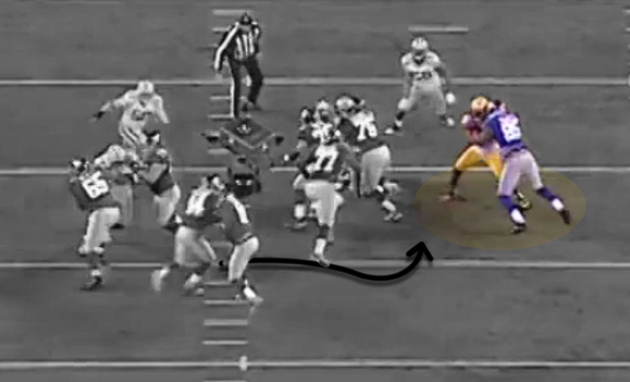 Walden doesn't break free on this one, but RB Ahmad Bradshaw does. He runs behind Bennett's block and into free space, picking up eleven and setting up a first and goal.

While you might not know it from these plays, Bennett can also catch. Again, I will defer to the wisdom of the West Coast master:

[A tight end who can block] is bigger, stronger and naturally is not going to be as quick and agile as the other type of tight end. So naturally you then fashion your passing game with him in the vicinity of linebackers. With that in mind, he must have soft hands...

Bennett's no Kellen Davis when it comes to catching the ball, and thank Halas for that. Here's one play where Bennett does just what Bill Walsh described: beat a linebacker, then make the catch. 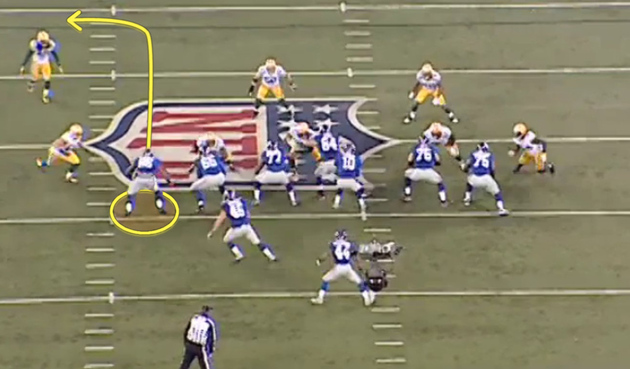 Bennett is the primary target on this play, but he starts out by disguising his intentions. He squares his shoulders to the DE and sets his feet apart, faking a block. After putting on this little show for the linebackers, he quickly jumps out of his stance and heads down the left hash.

On this next look, Eli Manning does Bennett a big favor for the TE. With the Packers in zone coverage, LB A.J. Hawk has his eyes on the quarterback, not the tight end. Eli's look towards center field freezes Hawk, giving Bennett an free pass into open space. 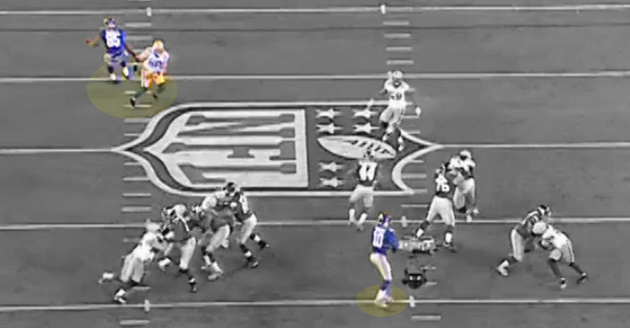 The end result? Bennett ends up between zones. The man's blocks are mean, but his hands are Charmin soft.

Bennett secures the pass, and finishes by turning upfield for another five yards.

I won't exaggerate and say that Bennett is a top-tier tight end, but Bennett is definitely an upgrade over what the Bears had former Bears Matt Spaeth and Kellen Davis. Like Spaeth, Bennett is a strong blocker. Unlike Davis, he can catch passes when his number is called. While this combination of skills might not win Bennett any trips to Hawaii, they're exactly what a tight end needs to succeed in a West Coast Offense.