While he won't be calling the plays, Aaron Kromer will be both offensive coordinator and offensive line coach for the Bears. Let's start with a look at what Kromer brings to the Bears' table.

Phil Emery is doing his part to put together a winning roster for the Bears, but it will be up to Marc Trestman and his staff to put that roster to use. Other than Trestman himself, the man who will be most responsible for taking the Bears offense to the next level is offensive coordinator/offensive line coach Aaron Kromer.

Football fans got more than a glimpse as to how Kromer would "run" things if he was in charge, since he was the interim for the interim head coach during the first six games of the Saints' 2012 campaign. In Week 2 against the Panthers, Kromer's inside zone runs. Here's a prime example from the Saints Week 2 match-up against the division rival Panthers: 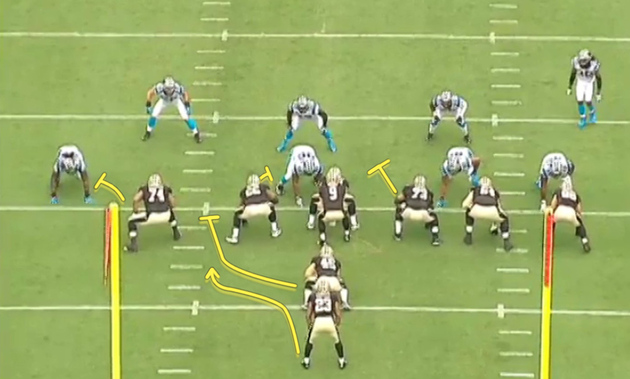 The basic premise of the inside zone is to put two bodies on each of the two interior line defenders to bust open a run play inside the tackles. TE Jimmy Graham (80) and Jermon Bushrod (74) are both on islands here, but their competent edge blocking frees up the other four linesmen to double-team the two DTs and push them towards the middle of the formation. With the four defensive linesmen out accounted for, the fullback leads the way and blocks the first linebacker he sees and the running back follows behind.

While this particular play only goes for two yards thanks to a strong response from the Panthers linebackers, notice what pinching in the middle of the defense with two double teams opens up for Saints RB Pierre Thomas. He chooses to follow behind the FB on this play, but the cutback lane (shown in red) should be there for him every time thanks to the work done of the right tackle and tight end. 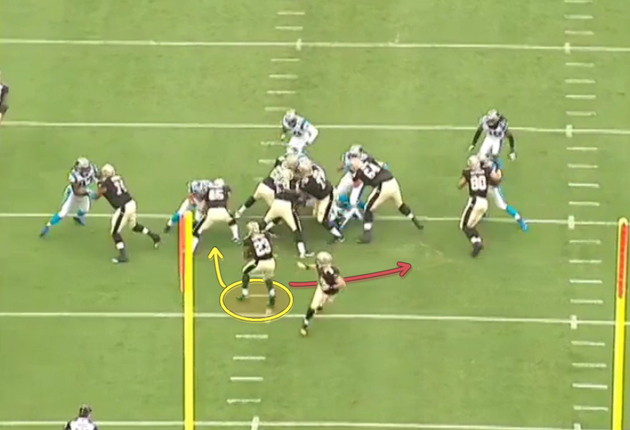 More on that cutback option in a moment. For now, simply note that Kromer will call variations on the play as his base run option. Zone blocking inside, man blocking outside, with a fullback in as a lead blocker. With a bit better execution, this particular run went for five yards. 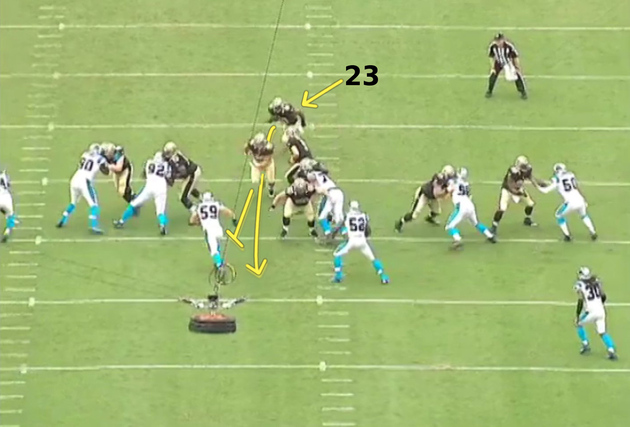 The Saints were not a run-first team, but Kromer ran the ball on almost every first down. With the Panthers playing lots of Cover 2 to defend against the numerous passing threats on the Saints offense, Kromer was more than happy to take the free yards available by running the ball right into the middle of these seven-man fronts.

Kromer's not afraid to leave his edge blockers - or at least his elite tight end and respectable left tackle - in man blocking situations. It does put extra responsibility on them to make their blocks, but allows the double teams to open up extra running lanes. If all the blocking holds and the linebackers get caught guessing, the running back will have an open cutback lane and can run towards daylight. That's exactly what Pierre Thomas does on this next play: 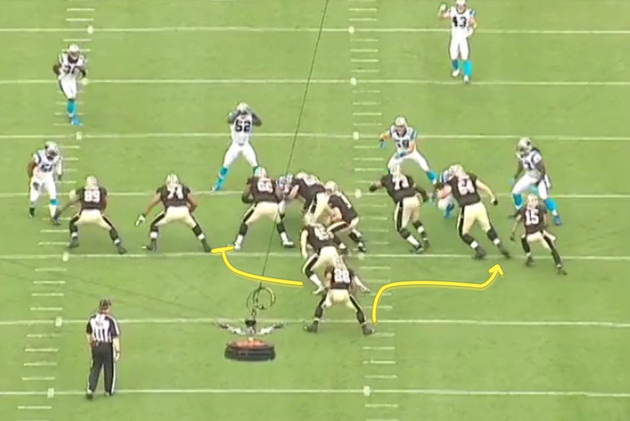 The action of the offensive line is nearly identical in this play as it was in the two previous, but Thomas' read makes things happen. With WR Courtney Roby (15) flanking the right side of the line, Thomas has an extra blocker at two different points of attack. The Panthers linebackers react to the motion of the fullback, so Thomas cuts it right. 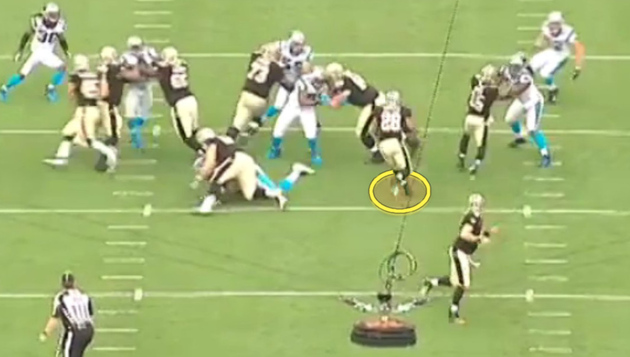 No run game would be complete without a couple of unusual formations, and Kromer is no stranger to the strange. Against the Panthers, he decided to run a series of plays with a very unbalanced line. Witness: 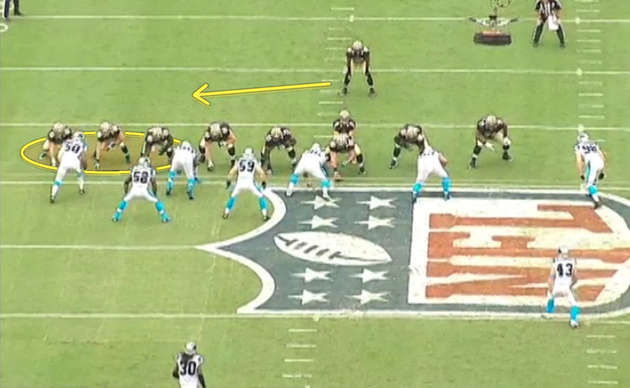 Highlighted to Brees' right, you can count a whopping three extra blockers. With all this strength on the right side of the formation, the Panthers defense had to respond with a few extra players of their own. This "gimmick" look like suggests a gimmick play, and that's exactly what Kromer gives them. Pierre Thomas executes a run fake to his right, drawing in the safety, but look what the formation and the RB's deception has done to the defense: 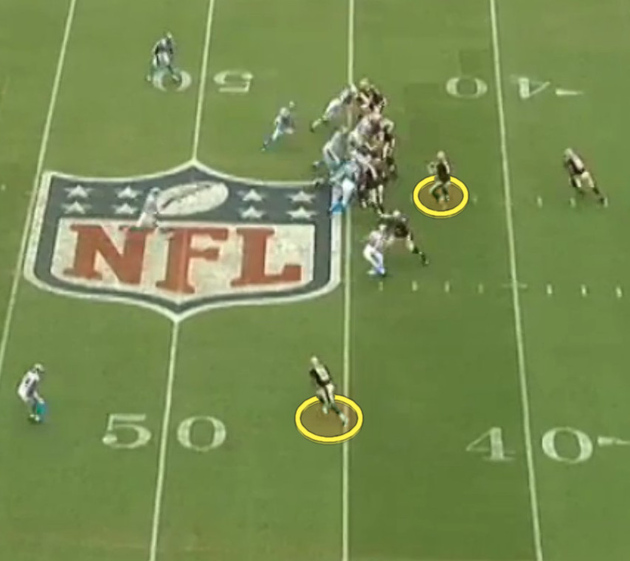 The one receiver on the weak side of the formation is all alone - there's not a defender within ten yards of him. Drew Brees misthrows the pass and forced the receiver to juggle the ball, but this play could have been good for a lot more than five yards if the pass was on target.

The Panthers thought they had wised up to Kromer's trickery the next time he broke it out. They brought in a defensive back to patrol the overloaded edge of this formation, but this defensive overshift fared no better than the last. No play action - just a long-distance sprint by RB Pierre Thomas to the strong edge. Here's the play at the snap: 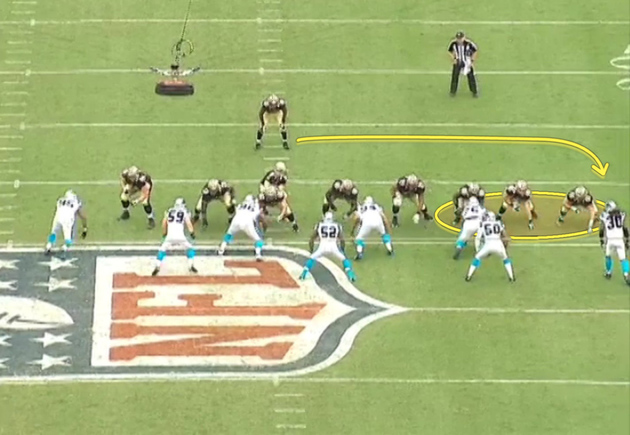 Here's what the play looked like as Thomas finally made it to the edge. His path from the snap is shown in red for clarity's sake, and the cut he is about to make is shown in yellow:

Stretching out a defense across the field with all these extra blockers once again paid dividends for the Saints. With no Panther able to get past the wall of Saints blockers, once Thomas got the edge, all he had to do was cut it upfield to get yet another nice chunk of yardage.

Next week, I'll take a look at the many ways that Aaron Kromer used his tight ends to get a sense of how Martellus Bennett will fit into the offensive equation.