Phil Emery has shuffled the depth chart at tight end at the start of free agency. Here's how his new coaches will use his new tight ends.

Share All sharing options for: Bears Playbook - Trestman, Kromer, and the Tight End

After the last Bears administration traded away first-round TE Greg Olsen and foolishly placed their hopes on now-former Bear Kellen Davis, Phil Emery has been working overtime to get the position group ready for a big-boy NFL offense. If history is any guide, new acquisitions Martellus Bennett and Steve Maneri will both see plenty of playing time. Let's look at the tape to see how Marc Trestman and Aaron Kromer will put these new Bears to good use.

Marc Trestman didn't like using his tight end as a blocker, and with good reason. With opposing defenses constantly forced to defend three- and four-receiver sets, if they committed extra players on a blitz, someone would come open on a hot read. Still, there were times that the Raiders were forced to use a TE to block. Here's one situation: 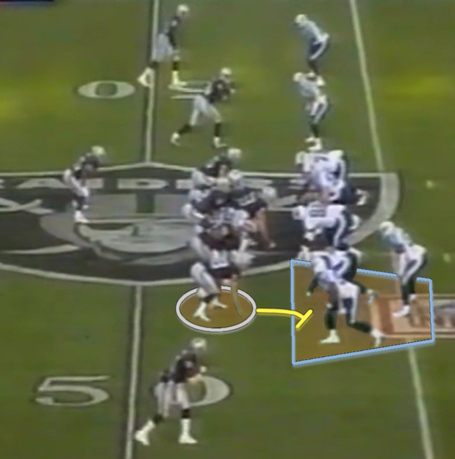 If and when there were extra men on the line of the scrimmage, Trestman put his tight end on what is known in playbook-ese as the EMLOS - the end man on the line of scrimmage. With the end man taken care of, all it takes is one heads-up call by the center to shift the blocking over to the side of the blitz.

Trestman doesn't strike me as the type of coach who wants to sit back and try and block blitzes like that, however. In his mind, it's better to attack an aggressive defensive formation with an equally aggressive offensive play-call, since every blitzer makes for one less defender in the backfield. Take the first play from the 2002 AFC Championship against Jeff Fisher's Tennessee Titans. 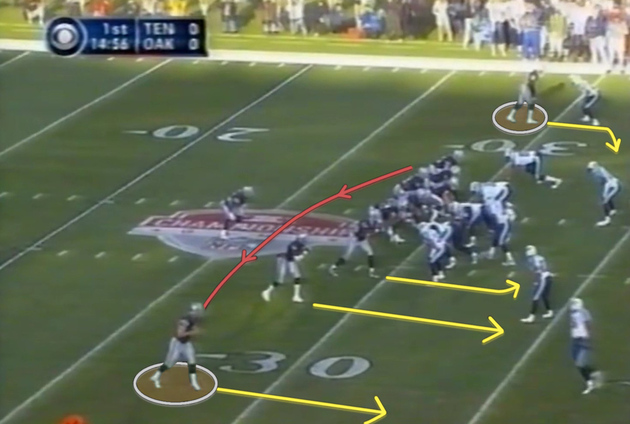 The Titans showed a blitz to the quarterback's right. In response, Raiders QB Jeff Gannon motioned TE Doug Jolley, but not into a better position to block. Jolley (highlighted) motioned all the way to the wide right, and RB Charlie Garner motioned out of the backfield after this look to give Gannon a total of five receiving options. The ball is snapped, and the blitz comes. This play isn't designed to create five true passing options for Gannon, however - the read was always going to be a quick slant to Jerry Porter in the left flat. But, with five men chasing down Gannon on the blitz, there are now only six defenders in the backfield, four of whom are about to get blocked by Raiders "receivers:" 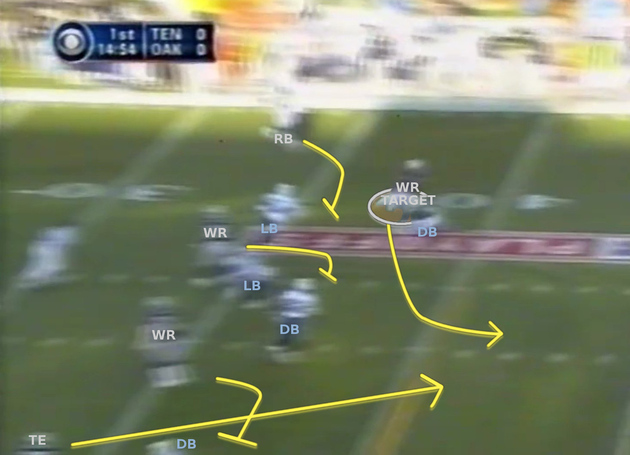 In this "Best of 2002 NFL Footage" view of the field as the pass is completed, you can see how Trestman tries to maximize yards after the catch on quick passes like this. Porter continues his slant route and picks up some blocks. TE Doug Jolley is able to use his speed to get past the DB across from him and put some hurt on the deep safety: 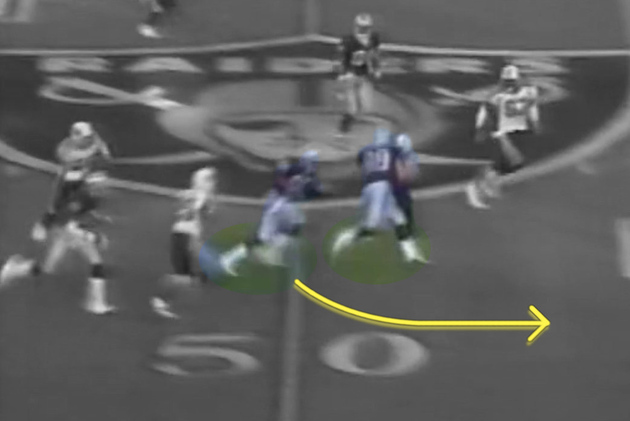 Instead of bringing a TE over to block the blitz and hope for the best, sending the TE to block down the field on this quick pass moved the Raiders over 25 yards. Believe it or not, the Titans didn't blitz much on first down after this one.

Trestman is also fond of using his TE in the play-action game, and when better to break out the play-action than in a short yardage situation? The Raiders did exactly that on first and goal later in the game: 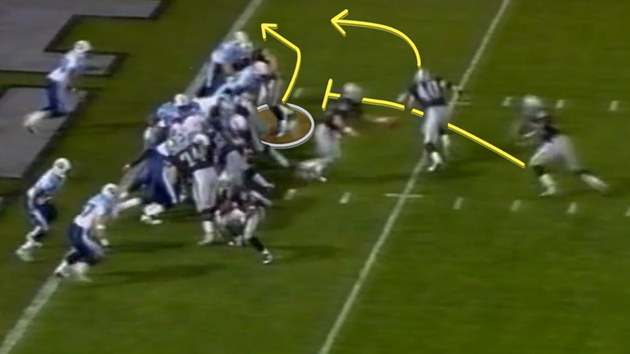 Doug Jolley is highlighted on the quarterback's right. He starts the play by laying a quick block on the defensive end across from him to sell the edge run to the Titans linebackers, but he rolls away from the block and into the end zone at just the right time to slip past the defense. Here he is wide open and about to get an easy six. 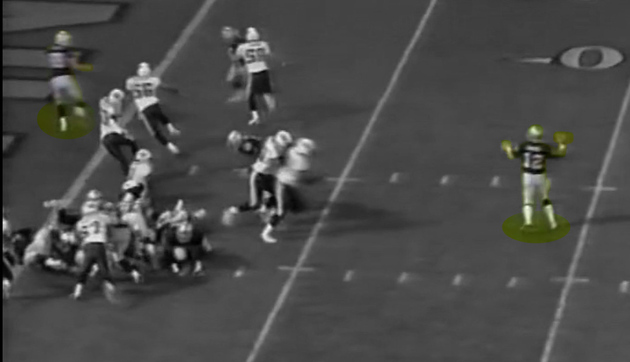 Trestman didn't use many two tight end sets - understandable with Tim Brown, Jerry Porter, and Jerry Rice as his WRs - but Aaron Kromer's Saints offense made heavy use of two TE sets. With two tight ends in the game, Kromer was able to use them to set the edge for his running backs, like in this play against the Packers last season. 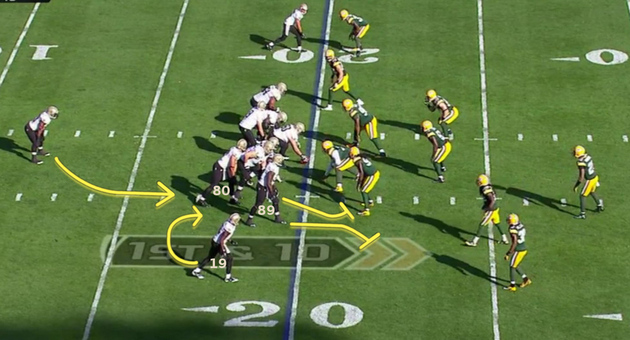 TEs Jimmy Graham (80) and David Thomas (89) lined up together on the right of the formation and were the key blockers on this run. Graham blocked the linebacker to the inside, and Thomas blocked the cornerback to the outside. With Devery Henderson (19) swinging into the hole the two TEs created to work as a lead blocker, the play is set up for a nice first down gain: 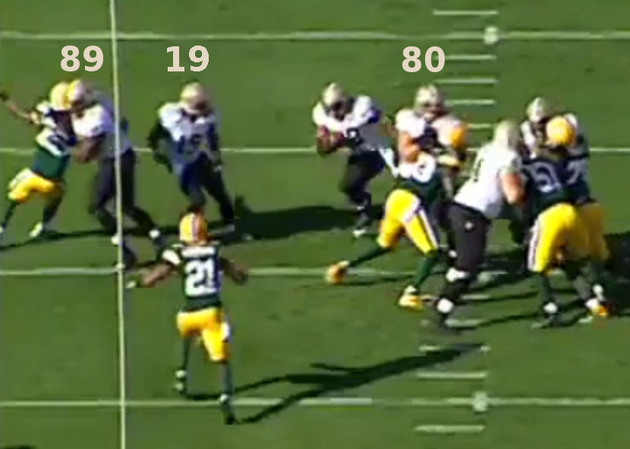 One problem: Henderson is too busy looking at his own player to get on the onrushing Charles Woodson. Woodson rallies to make the tackle, but the two tight ends did their jobs.

While Kromer found more ways to get two tight ends on the field than Trestman did, both are equally fond of the tight end in the play-action game. Kromer's Saints put on quite the show for the defensive backfield on this next play: 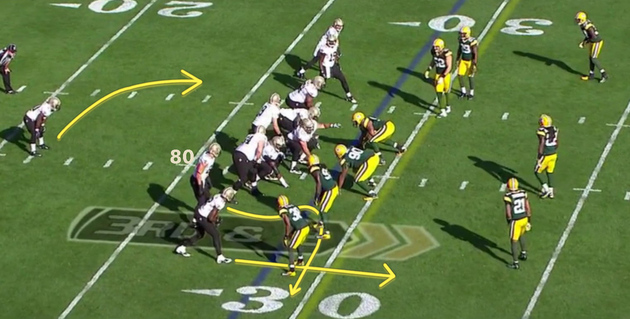 Drew Brees wisely kept an eye on where Clay Matthews was on this third down, because it's a good bet that wherever #52 is, the blitz is probably going to be there too. Brees audibled into an aggressive play to counter the weak-side blitz the Packers were about to send after him. Zone blitz? Flood the zone opposite the blitz with receivers.

At the snap, the blitz comes, and Jimmy Graham (80) plays along with Brees in selling the play-action to zone defender Charles Woodson (21). Graham quickly engages with the defensive end across from him, only sneaking into the flat after the WR has entered into Woodson's zone. 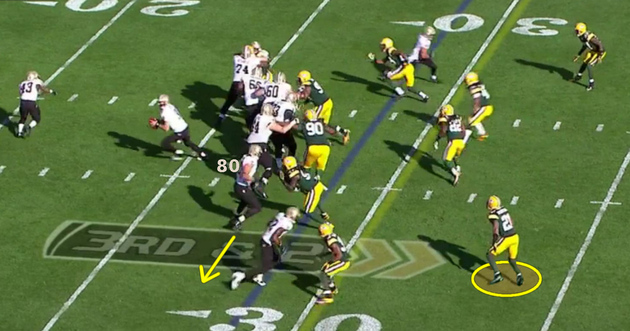 With Woodson's attention held first by the fake toss to the left and then by the receiver running straight at him, Jimmy Graham is manned up with a defensive end. The defender doesn't have a chance against the much speedier TE, who makes the catch and earns the first down before a Packer can even get a hand on him. 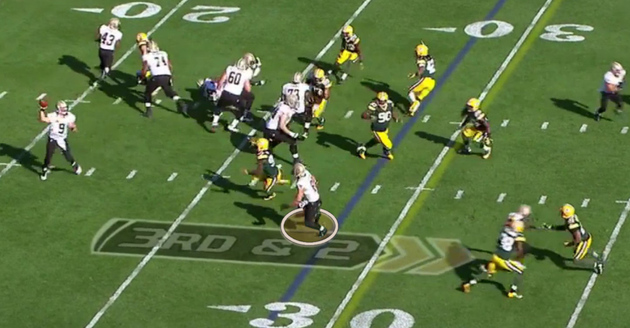 With one or two more upgrades to the offensive line, Trestman should be free to replace tight ends Chip Block and Max Protect in passing situations. And between Trestman's old(er)-school approach and Kromer's knowledge of the Saints' new-fangled offense, the Bears are set to get solid production from their tight ends as both run blockers and pass catchers.