For all the noise surrounding the potential departure/retirement of Brian Urlacher, the other Bears free agent middle linebacker has slid under the radar. Here's why the Bears would be just fine with Nick Roach taking over at middle linebacker in 2013.

Face it: Brian Urlacher's best days are behind him. Urlacher will certainly follow in the footsteps of Bears linebackers Bill George, Dick Butkus, and Mike Singletary into the Hall of Fame, but time and injury have finally caught up to him. The Bears still may sign him to a cap-friendly, short-term deal to keep the middle linebacker position locked down while Phil Emery looks to fill other needs. If Emery decides the old man isn't worth the money he wants, however, the Bears have another answer for the middle linebacker position waiting for them in free agency: six-year veteran Nick Roach.

Roach has done right with his NFL career. He came into the league as an undrafted free agent with the Chargers, but after San Diego cut him before the start of the 2007 season, the Bears quickly scooped him up. Roach slowly worked himself into the linebacker rotation, first at the strong side, and then in the middle when Brian Urlacher went down at the start of the 2009 season. While he struggled to fill the shoes of Urlacher, he did well enough to stick on the roster at the strong-side position in the three seasons since.

Nick Roach got another chance to man the center of the defense when Brian Urlacher went down yet again in the middle of the 2012 season. To succeed as a middle linebacker in a Tampa 2, 4-3 defense, a middle linebacker is called on to defend the run and the pass. Let's look at a few samples of how he did last season.

If you can't stop the run, you can't be a middle linebacker. Period. Roach was lucky enough to get a chance to try his luck at stopping the best in the game - Adrian Peterson - when the Bears played them in Minnesota. Looking back at the tape, Roach did as well as could be expected.

Here's one play he did make: 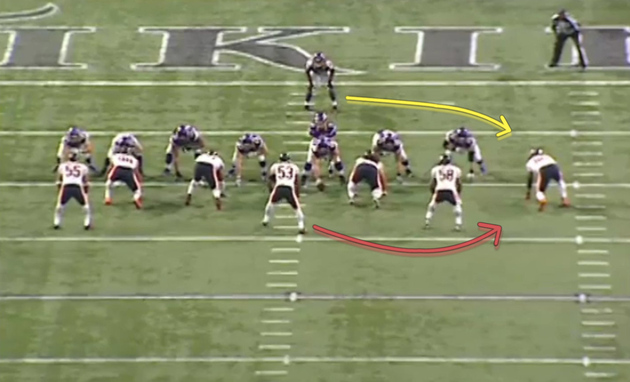 The Bears presented a fairly standard 4-3 front to the Vikings, correctly expecting Minnesota to run it from their own 10 yard line. With the four defensive linesmen and fellow linebackers Lance Briggs and Geno Hayes all working the gaps straight ahead of them, Roach was the one player who had to read and react to the play. He read the blocking perfectly, and rallying straight the Vikings' point of attack: 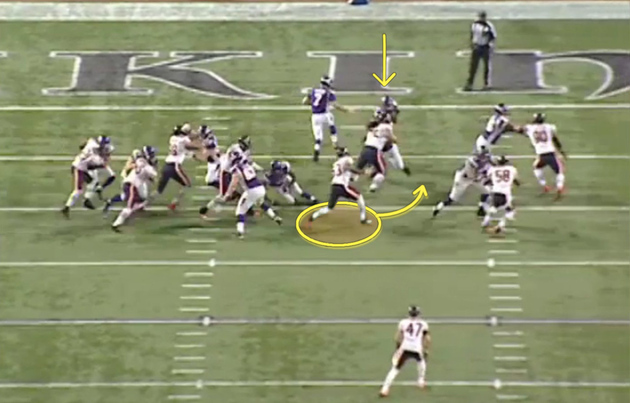 Roach, highlighted above, is the one defender in the front seven who was unblocked, and he took full advantage of his freedom. He got his arms around the under-the-arrow Peterson and dragged him down for a minimal gain.

Adrian Peterson wasn't the NFL MVP for nothing, however. Roach struggled at other times to defend him. Here's one play you can file under "should have made the tackle." 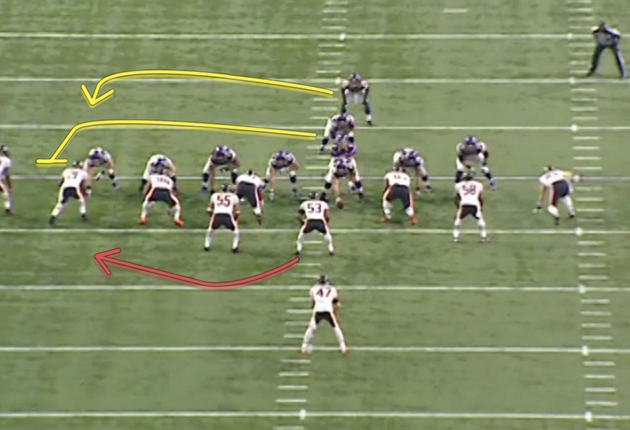 The defense had nearly identical assignments on this next play: everyone in the front seven worked the gap right in front of them except for Roach. Roach made the right read and got himself in the right position, but this time he didn't have the benefit of a free shot at the running back. 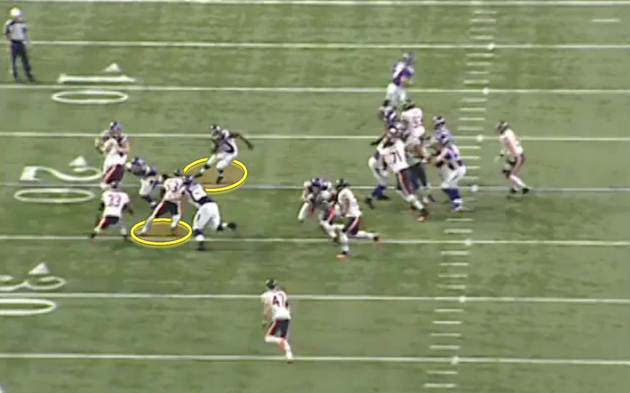 Roach got inside the leading fullback on this run play, but he didn't have enough speed or power to beat the block and get Peterson the running back completed his cut. Chris Conte (47) was there to clean things up, but Roach could have made this play with stronger fundamentals.

As a strong-side linebacker, Nick Roach is often called on to defend the tight end in passing situations. While his 6'1" height isn't as ideal as Urlacher's 6'4" when matching up against taller receivers, Roach has one thing Urlacher no longer possesses: speed. After testing his mettle against the NFL's best running back, Roach got to go against the one of the best receivers in the league, Calvin Johnson.

Here's one play against the pass that Roach made perfectly. The Lions put Calvin Johnson in the slot thinking that it could get the receiver a favorable match-up, but beating Roach in coverage didn't prove easy. Here's how they lined it all up at the snap: 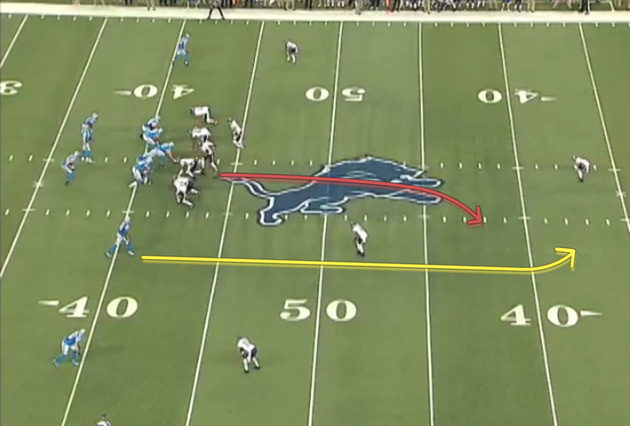 Roach started the play with a Lovie Smith classic, the "mug the A gap" look. At the snap, Roach quickly retreated, stepping backwards stride for stride with Johnson coming out of the slot. Keeping his eyes on the quarterback the whole time, Roach was able to get to the spot at the same time Johnson did. End result? 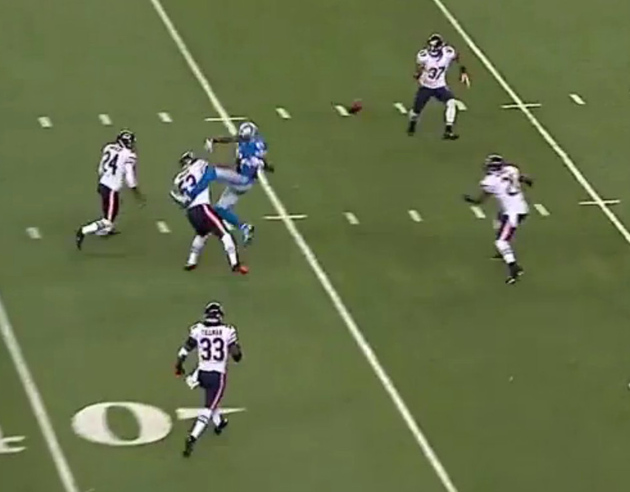 Don't get me wrong - I don't think Nick Roach is suddenly going to become a Pro Bowl linebacker. Still, the guy can play ball. He has done more than adequately at the MLB spot when he was called on, and with a degree from Northwestern, he's certainly got brain power enough to make the on-the-field calls. He comes with a clean injury report, and at only 27, Roach is reaching his prime years as a football player. If the Bears decide they would rather part ways with Brian Urlacher, the team could save its draft picks and dollars to deal with its many other needs by offering Roach a small-money contract.

What do you think? Hit the poll below.