This off-season, Devin Hester has gone from threats of retirement to a willing surrender of his wide receiver duties. Can new special teams coach Joe DeCamillis lead - and lead block - Hester back to greatness?

Share All sharing options for: Bears Playbook - The Resurrection of Devin Hester?

When I broke the news to Devin Hester that the Bears had just traded up to draft WR Alshon Jeffery around this time last season, he was still fired up for what he could do on offense and welcomed the competition. One mediocre season on offense and coaching change later, and that competition got the best of him. So much so, Hester is now giving a thumbs-up to his return to "return game specialist."

The final results from the Devin Hester Experiment are in: it was a failure. While Lovie Smith saying that Hester was an #1 receiver was about as reassuring as "Rex is our quarterback," the former coach gave him every opportunity to get the job done. Hester's stat line tells the tale:

Lovie backed the idea of Hester as his team's featured WR. Angelo paid the man accordingly, handing him a $40 million deal in 2010. Lovie and Angelo were put on the bus (running!) for making personnel decisions like this. To put Hester's numbers after his WR payday in perspective, actual #1 receiver Brandon Marshall put up 2012 numbers - 118 rec, 1508 yds, 11TD - surpassing all of Hester's production under this contract. In short, Hester just didn't have it.

The last gang got ran out of town because they just didn't know offense - they couldn't draft it, couldn't sign it, and couldn't coach it. Hester's contract was merely a symptom of that greater problem. Thankfully for Emery, most of Hester's money was loaded on the front of his contract, and his cap hit for 2013 is slightly under $3 million. At that price, Emery and new head coach Marc Trestman are willing to give Hester one last shot at returning to his ridiculous ways as a kick returner.

This is where new special teams coach Joe DeCamillis enters the picture. DeCamillis is a plenty-adequate replacement for Hester's old boss, Dave Toub. First, let's look at the average kickoff return yards and ranks of DeCamillis' Jaguars ('07-'08) and Cowboys ('09-'12) teams as compared to Toub's Bears squads:

The roller-coaster rankings for Chicago clearly show Hester's up and down career in the return game. When both he and Johnny Knox were hot from 2008 to 2010, the numbers were great, and when Hester cooled down, the Bears fell fast.

DeCamillis' rankings show what happens when a team overlooks the third phase. In Jacksonville, DeCamillis molded Maurice Jones-Drew (26.2 ypr in '07) and rookie Brian Witherspoon (24.0 ypr in '08) into consistent return men. The top-heavy Dallas roster, however, was never long in return aces. DeCamillis had some success with Felix Jones ('08), Bryan McCann ('09-'10), and Dwayne Harris ('11), but two of those three have 40 times well into the 4.4s. Even the fastest of that bunch - McCann with a 4.35 - doesn't even approach Hester's straight-line speed.

Hester's straight-line speed is only dangerous when he actually runs in a straight line, however. Hester's career needs a shake-up, and DeCamillis is known as a take-no-prisoners kind of coach. With Hester now in a contract year and Phil Emery feeling no sense of obligation to Lovie Smith players, Hester will have to prove it now or prove it for someone else next season.

To get some idea of what the new coach will be doing in front of Hester, let's look at one return play where #23 would have prospered. Kickoff coverage units have two goals: never give up the edge, and maintain a wall of defenders up the middle. As such, coverage units send two players along each edge and six men up the middle. For a return to work, the receiving team must either sneak around one of the edges or punch a hole right in the middle.

The key to knowing which of these two options are in play is the blocking of the up-men. With DeCamillis, if the first line of blockers tries push an edge man in, the return is going up a sideline, but if they push a middle-man out, the return is headed up the gut.

On this return from 2011, DeCamillis opted for the latter. He had an up man stay at midfield and lay just enough of a block on the first inside defender to chip a little hole in the Eagles' wall. See the edge zones and the sole midfield block: 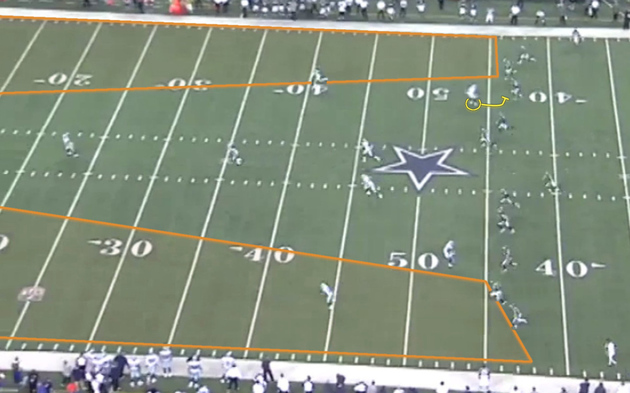 Dallas was able to create a crease along the left hash thanks to that one block. Put bodies on the rest of inside coverage, and you'll start seeing daylight: 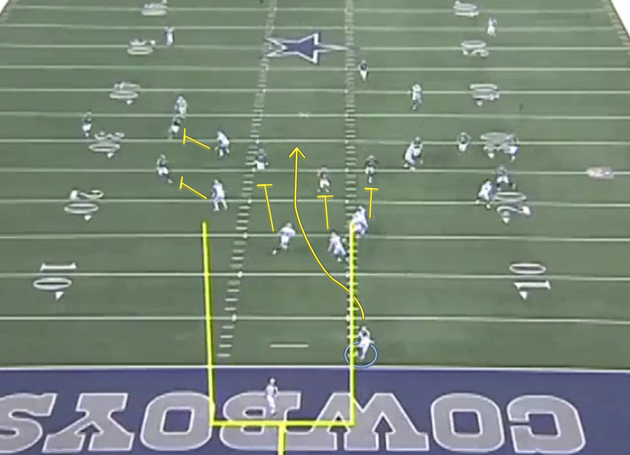 Now all that's left is for the return man to hit the hole and start sprinting. Below, notice the numbers difference between the returner's right and his left - that one chip at the start of the play worked wonders. Also, notice that the return-man isn't going to run "behind the wedge," as so many announcers are keen to declare. The point isn't to run through that final line of blockers, it's to run past them:

The Cowboys wedge blockers blew the coverage open by sealing off as-yet-unblocked right side. With the middle now open for business, Dwayne Harris cashes in by sprinting to the left of the wedge. 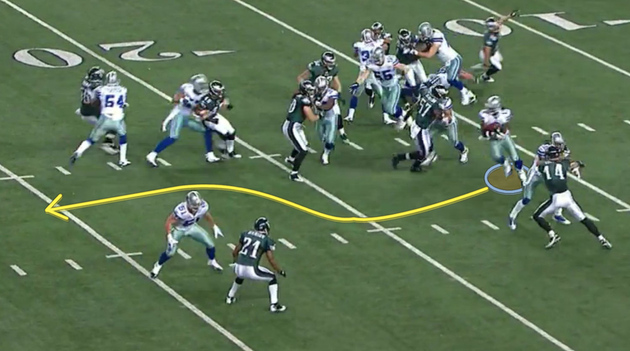 Then it was off to the races, but Harris didn't have the horses to beat them all. He gets dragged down from behind around midfield, but this blocking might have been enough for someone with a little more speed. Long story short, Hester's blocks should be there.

DeCamillis is no hand-holder, but Hester has been coddled for far too long. Instead of pouting, Hester should have been happy that the old gang was sent packing. That old gang, after all, should have been on Devin's case for his lackluster performance the last two seasons. Hester can certainly do damage in the return game with his speed. It's less certain that he'll be mentally ready to turn in around - literally and otherwise - but Hester is saying the right things. With only one playbook to study and a coach who will throw the book at him if he doesn't execute, it's do or die for Devin. Let's just hope the ones looking dead out there aren't wearing Bears colors in 2013.