Brett Favre after hit by DE Corey Wootton: 'What are the Bears doing here?'

The final play of Brett Favre's career came after a hit that left him unconscious on the playing field, and he recently discussed the details of what happened that night.

Share All sharing options for: Brett Favre after hit by DE Corey Wootton: 'What are the Bears doing here?'

Brett Favre played professional football for 20 seasons. That's two decades of bumps, bruises, breaks, and blood, and who knows how many concussions.

After returning to the NFC North to play for Minnesota, Favre led the Vikings to a 12-4 record in 2009, and nearly to the Super Bowl. At 40 years old, he had one of the best seasons of his entire career, and decided to give it one more go in 2010.

Chicago Bears fans will always remember not only the final game of Favre's career, but undoubtedly the final play. It was the 2nd quarter of a Monday Night Football game being played at TFC Stadium, and was bitter cold. The Vikings were down 10-7, and in a 3rd-and-4 situation near midfield. What unfolded next would prove to be the end of Brett Favre's career.

Chicago Bears defensive end Corey Wootton got to Favre in the backfield as the pocket collapsed, and slammed him into the ground. Favre recently described that play to KTCK-AM in Dallas.

"(It was) one of the most minor hits I've ever (taken). The guy didn't even hit me, he pushed me. I threw the ball, and the field of course was solid ice, it was like concrete. He pushed me, I slip, fall, nothing hurt, I hit the left side of my head, and the next thing I remember, I was snoring as our trainer is kind of shaking me, saying, 'Are you OK?' I look at the footage, even though it wasn't long, there was that 10-15 second period where I was asleep."

I look at the footage, even though it wasn't long, there was that 10-15 second period where I was asleep.

"I remember looking at our trainer Suge (Eric Sugarman) and saying, 'Suge, what are the Bears doing here?' He's like, 'Ah, you come over here with me, buddy.' As I started figuring it out as I was getting to the sidelines, i thought, 'Now, if there was ever a time where the writing is on the wall, this is it.' It may be a little too later for the cumulative damage that you've done. Now it's probably a little too late to say, 'OK, now is when I'm going to save my body.' Went in, took a shower, got some hot cocoa, got a hot dog and said, 'That's it. I'm going to watch the next two or three (games).'"

He did indeed watch the final three games from the sideline, and never returned to the playing field. After being drafted by the Atlanta Falcons in 1991, Favre's 20 year run in the NFL was over. 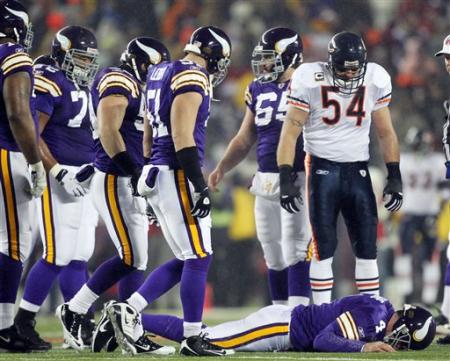