The Bears have wrapped up their first fieldwork of the Trestman regime. What say some of the reporters who were there?

Share All sharing options for: 2013 Chicago Bears: Informal questions after the first camp

The Bears took to a field under Marc Trestman today. We've put together some comments from beat writers (in bold) and thrown a couple of our own comments. (non-bold)

From the inscrutable Brad Biggs of the Chicago Tribune:

Gabe Carimi is working at LG, RG, and RT, and just wants a job doing one of them.
He's an awfully tall guard. Is the future not too bright for young Mr. Carimi?

Is this a make or break year for Cutler? Cutler says: "every year you put pressure on yourself."
I think, this year, a lot of others are putting that pressure on Jay, too.

How does Jay feel about big contracts being signed around the NFL? "Doesn't make me mad."
Play well, and he'll get one of them from someone.

Coach Trestman says that Carimi is more of a guard than a tackle. I'll repeat-that's an awfully tall guard.

From Mike Wright of ESPN Chicago:

Hester not working at all w/WRs. No meetings, nothing. Trestman said that once Hester locks down duties as specialist, they may look at other ways to incorporate him.
As Lester questioned, perhaps some kind of "package" of plays.

Bears practiced today at fastest pace since Wright has been covering them. IN and out of huddle quickly/plays run quickly.
Which is basically the antithesis of everything we've seen the previous three years.

Can't say too much more, but the offense is fast.
How fast was it? Very fast.

Defense had several stripped balls today.
I would imagine that emphasis sticks around for the 2013 season.

Cutler says this team this year is going to protect QB and get rid of the ball quickly, and to the playmakers.

And this photo from Zach Zaidman:

A look at the first practice of the Trestman era 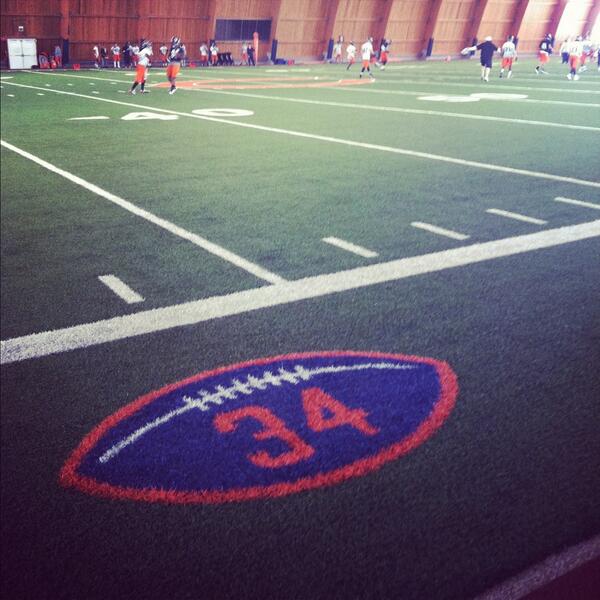