The Joe DeCamillis playbook stays open for another week. This time, a look at what the Bears will do after their defense stops the enemy in its tracks.

Kick returns and punt returns might not look at that different on TV - the fast guy catches the ball and runs straight at the other team until he gets tackled or scores, right? Many of the blocking principles once the kick is away are the same, true, but the punt return squad has to be just as effective "blitzing" the punter as well as blocking the other ten players to do their jobs well. Throw in the NFL record holder for punt return touchdowns into the mix, and Joe DeCamillis has every chance to keep the Bears special teams special.

A team is going to send a few of their players after the punter almost every time. You never know when the ball will end up on the turf instead of in the air, and sometimes those blocks actually work. It's not a good idea to go all-out after the punter, however - while there's a small chance an all-out block attempt will succeed, there's a much larger chance that the return man will be destroyed by the other team. As it is, you'll generally see DeCamillis call something like this first play, a blend of downfield blocking and punt-blocking: 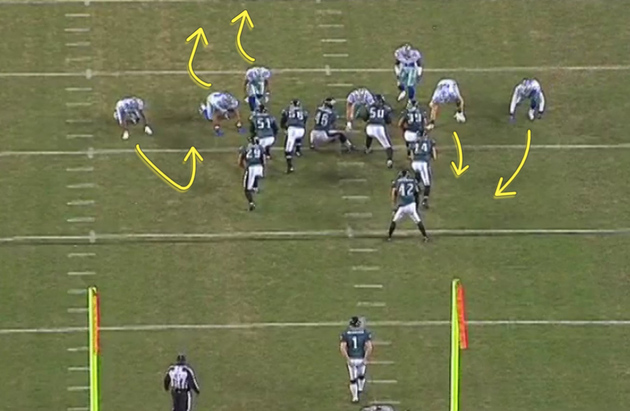 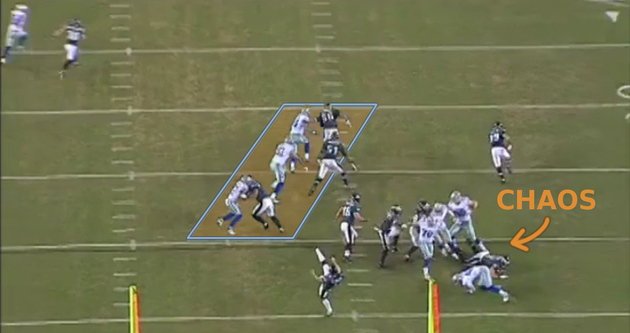 You can see both the wall of blockers on the left and the mess of players on the right. Both of these outcomes play into DeCamillis' hand - by occupying four Eagles at the line, the rest of the Cowboys were able to create a well-defined lane to the left sideline. Below, see Dwayne Harris about to receive the ball. Notice how those initial blocks on the left have opened up a whole side of the field. 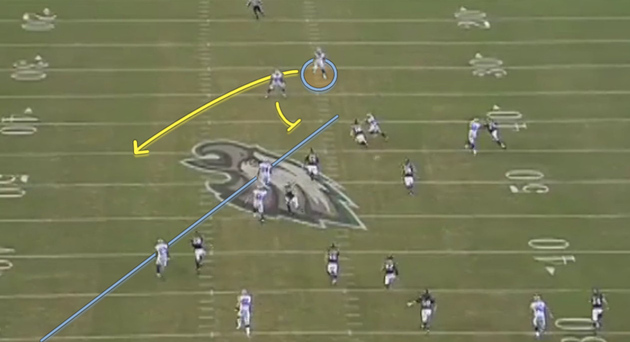 With the blocking in place, all Harris has to do is hit the gas and hope for the best. His one lead blocker is there to take care of the first Eagle to arrive on the scene, and then it's off to the races. 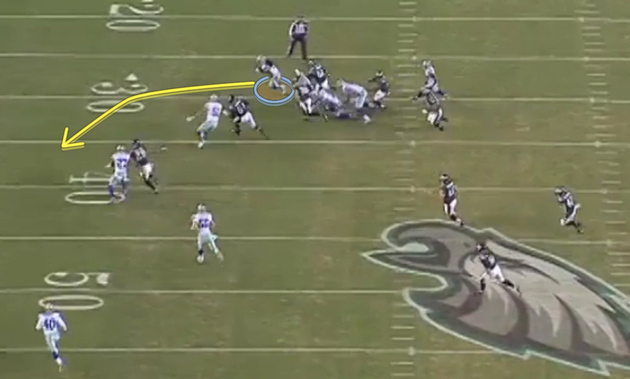 While this one angle looks promising, it was not to be. The Eagle stepping over the 40 above is able to slip inside the Cowboy's block and get just enough of a hand on Harris' leg to stop the return. Successful or no, plays like this show how DeCamillis will work the field for Hester - block some guys, distract others, and hope that Hester can take care of the rest.

Sometimes, it's often better for a team to play more for the block than for the return. The Cowboys found themselves in two situations like this later in the game. In this first one, the Dallas D had stopped the Eagles eight yards shy of midfield, meaning it would take an perfect punt for the Eagles to net over fifty on the play. Perfect time to go after a block, or so DeCamillis thought: 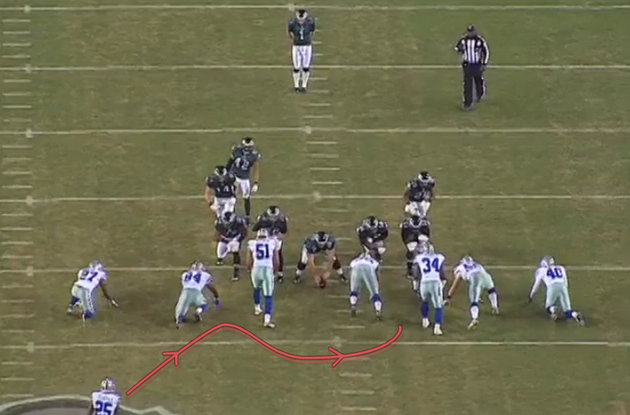 Just like a blitz on defense, the punt block is rooted in deception. Here, the Cowboys motioned in a player to first feint a rush to the punter's right before motioning over to the opposite side. The look at the snap was something like this: 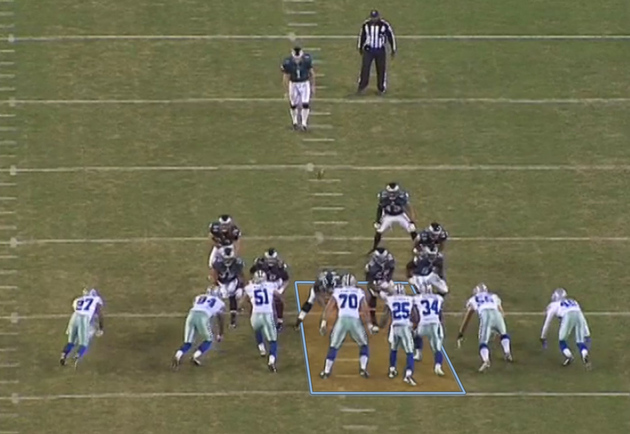 Again, think of it as a blitz. The Cowboys have overloaded the area around the long snapper and left guard with three attackers, meaning someone should be able to skate through untouched. While the move by #25 on the Cowboys was nothing but a bluff, the Eagles' blocking was confused enough that #70 was able to get tantalizingly close to the punter before the kick got away: 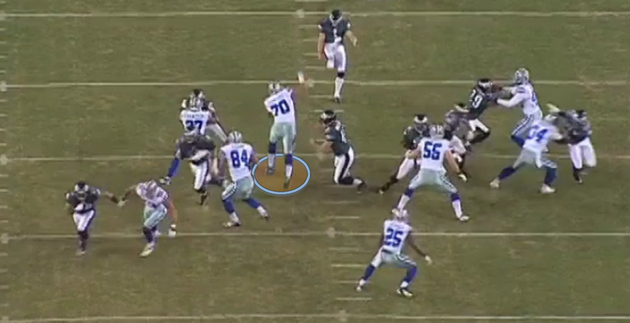 Even though the block never materialized, DeCamillis' read of the situation was correct. The kick ended up with a little too much under it - a result of the pressure, perhaps - and sailed over the head of Dwayne Harris on the ten. Unlike Hester, Harris made the wise decision of getting the twenty free "return yards" by letting this one bounce into the end zone. The flight of the ball is in orange: 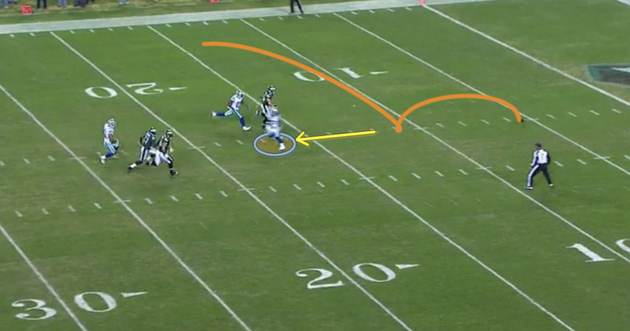 DeCamillis would be wise to teach Hester this lesson, as there is something to be said for never fielding a punt inside the ten.

There are times that call for an all-out block, like when there are under ten seconds in the half and the opposing team is backed up deep in their own territory. Here's how that play looks: 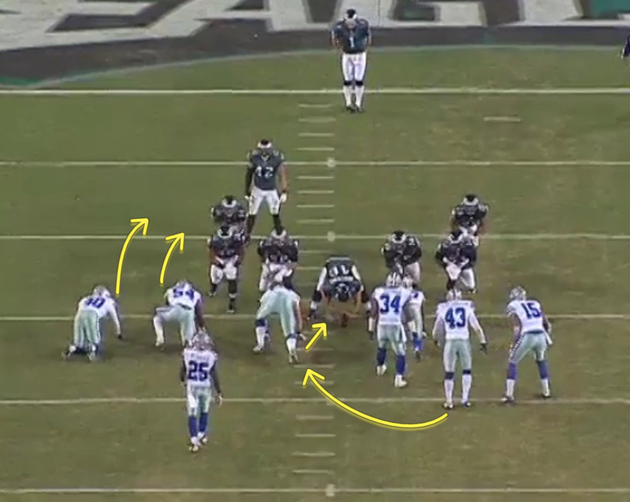 DeCamillis attacked this punt formation in two ways. Again drawing on blitz principles, the Cowboys started by showing an overload to the punter's left. This overload is going to draw the personal protector away from the right wing of the formation, which is what DeCamillis wants. He's hoping to create two one-on-one matchups for the two edge rushers to the punter's right. You can see that the Cowboys deception got the better of the Eagles: 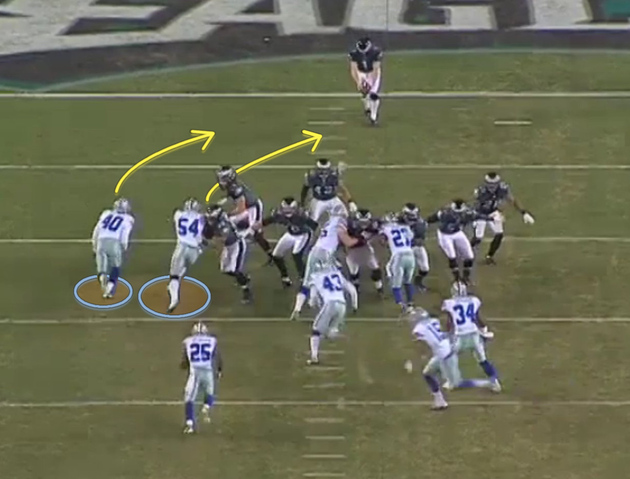 The two men coming around the right edge of the formation have a decent enough shot at the ball, as does the push coming straight up the middle. Again, the Eagles were able to slow them down just enough to get the punt away, but the Cowboys' #54 had a good shot at it: 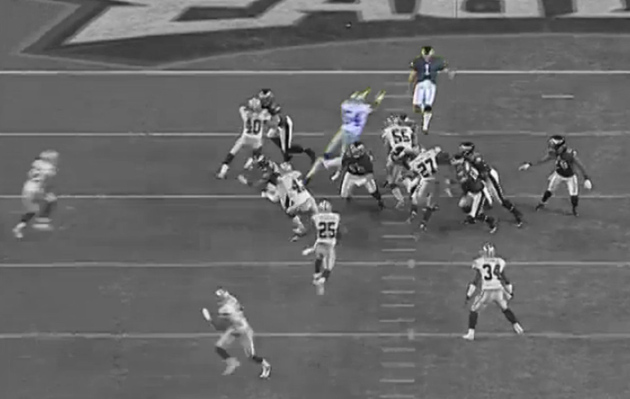 So that's the punt return game as DeCamillis drew it up in Dallas. Will he be as aggressive going after the block with a more deadly return man? Depends on just how deadly Hester (or his replacement) proves to be. Punt-blocking is a low-percentage affair, but so are punt return touchdowns. If you want to judge how much faith DeCamillis has in Hester, watch to see how much he goes after the punter. If the Bears dedicate their efforts to blocking the punt, they're saying they don't think Hester is going to get it done. If the Bears make only token attempts to get after the punter, however, they've cast their lots with Hester. Either way, if DeCamillis can get Hester to stop fielding punts inside the five, I'll be happy.