Between the coaching changes in Chicago and his off-season training with Pro Bowler Brandon Marshall, second-year player Alshon Jeffery seems poised to have a breakout season. But do the numbers support the idea that overall offensive improvement and the presence of a high-caliber WR bode well for Jeffery's success?

Share All sharing options for: Predicting Alshon Jeffery's Second Season by the Numbers

The Bears media has been all abuzz with news about Alshon Jeffery's off-season work with Brandon Marshall. With Phil Emery's second draft starting in less than 24 hours, is his second pick ever as GM ready for a breakout season? Wild, uninformed projections are part and parcel with draft season, but I wanted to take a more robust view of the situation. This week, I'll be taking a look at every wide receiver taken in the first two rounds of the draft from 2004-2011 to see what factors most influence sophomore improvement.

First, the raw data. I had a couple of different ideas that I wanted to test out with these numbers:

My data set is admittedly not the most robust, but I'm not aiming for statistical significance so much as getting a general sense of whether these three questions can be supported with data and not just conventional wisdom.

First up was to see how well the overall pick spent on a wide receiver lined up with his performance. Here was the first interesting conclusion that I found. Here are two graphs comparing WR yardage production as compared to his pick number: 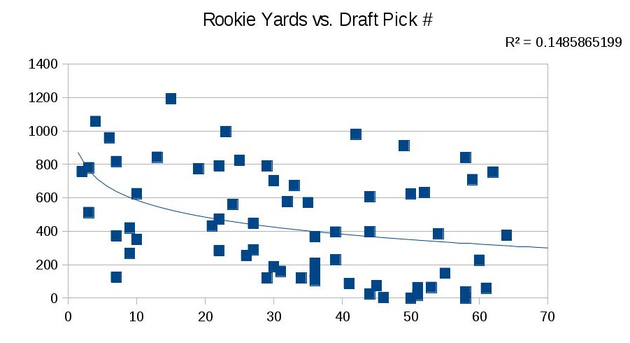 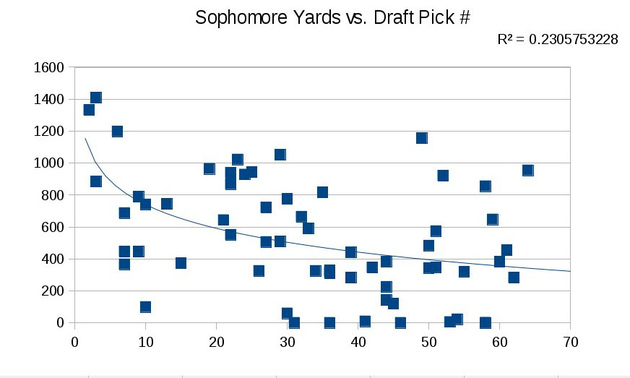 In other words, a lower-picked rookie can surprise opposing defenses for a season or a higher-picked rookie might have trouble adjusting to the NFL game, but in the end, GMs have some grasp on who the best talents will ultimately be. 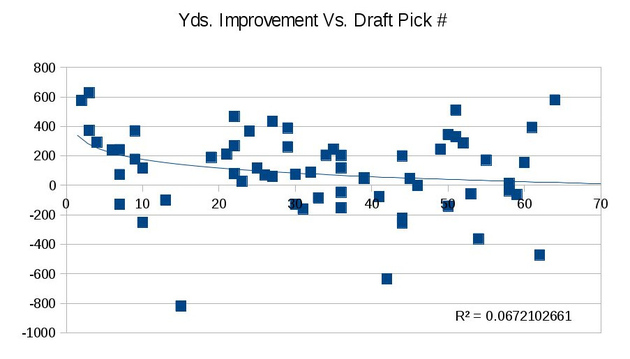 If we were to rely on draft pick alone, where would the numbers suggest that Jeffery would end up next season? Jeffery was taken with the 45th overall pick. Take the average of every WR taken between the 35th and 55th picks, and you get a rookie average of 307 yards, pretty close to Jeffery's actual 367. Unfortunately, the average within this selection range for second-year yardage - 343 yards - is also pretty close to Jeffery's rookie numbers.

Dig a bit deeper into these numbers, however, and you'll find that a few "bust" players in this range are dragging these averages down significantly. Take out the four biggest busts in the data set, and the numbers seem more optimistic. The rookie average - 354 - is very close to Jeffery's actual performance, and the sophomore average - 414 yards - gives more room for hope. Still, the improvement numbers vary widely - there are top ten picks who didn't improve at all their second season, and picks in the sixties whose yardage totals increase by over 500 yards their second season.

You don't need to muster an army of statistics to predict the Bears offense will improve this season under Marc Trestman. The above averages suggest that Jeffery will improve on his numbers by less than 100 yards, but will an improvement in the overall offense put Jeffery over the top?

The results are surprisingly inconclusive. 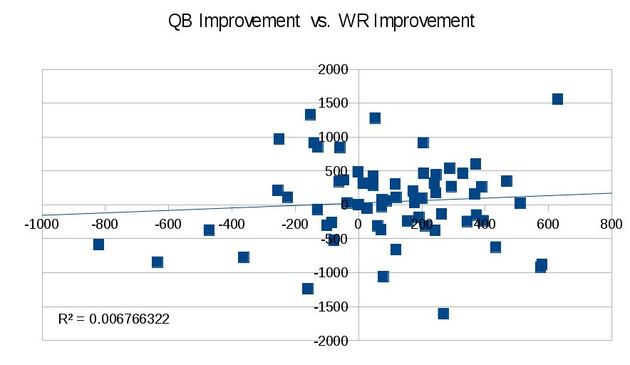 There is a small trend that shows that improved QB numbers lead to greater WR improvement, but the trend is small indeed.

If Cutler finally breaks the 4,000 mark next season, it's not a guarantee that Jeffery will have a 1,000 yard season. It's reasonable, however, to imagine Jeffery falling into the large clump of players sitting just above the trend line on the "improved" side of the x-axis, with the group of more than ten players whose second season numbers went up more than 200 yards while QB play improved by around 500 yards. The rising tide can carry all ships, but it's not guaranteed to carry them all that far.

While it is obviously impossible to quantify the effects of having an older receiver as a mentor, it is possible to compare a draft pick's improvement in his second year to the performance of the top receiver on the team during his rookie year. 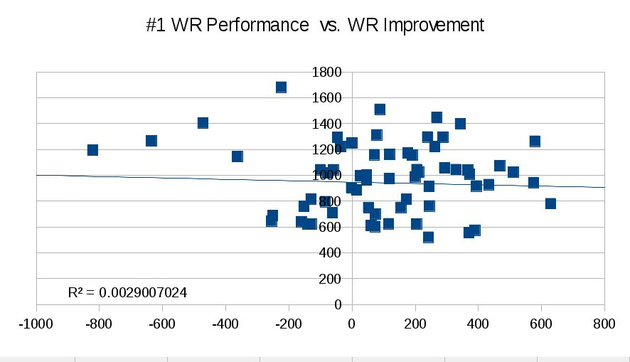 The numbers are all over the place on this one, but there are a few clumps of data worth noting. First, you have the dots in the lower left - players who were on a team where the #1 WR didn't top 800 yards and who regressed in their second season. Often times, these second-year players were the #1 in both seasons, and simply didn't have what it takes to be a real #1. Defenses figured them out, and their production dropped.

The other big clumps of data - on the upper right - is the situation Jeffery finds himself in. There's group of players who have only small increases in performance with a 1,000+ yard #1 on their team, and a slightly smaller group who improved 400 yards or more across from a 1,000+ yard #1 WR. You'd like to put Jeffery in that second group, but this data suggests that Jeffery has a decent chance of taking a step forward and very little chance of taking a step back.

If Jeffery takes a bigger step forward than 50 yard average improvement for picks around his, it'll be precisely because this "mentorship" effect has asserted itself. All that training Jeffery's been doing this off-season with Brandon Marshall? It should help him stay healthy for all of his second season. If Jeffery stays healthy for 16 games - without any improvement in per-game performance - he's due for a 587 yard season. It would be a significantly larger improvement than the averages suggest, but well within the bounds set out by the data.

I'll set that number as the over-under. Place your bets below, follow me on Twitter, and see you back here soon with a "Bears Playbook" look at the new draft picks. Are we on the clock yet?