Former Bears head coach Jack Pardee passed away this week at the age of 76. Here's how he beat out Buddy Ryan's Viking defensive line on his way to stealing the 1977 NFC Central division crown.

After George Halas led the Bears to a win in the 1963 NFL Championship, times got rough in Chicago. The Bears fell into the longest playoff drought the franchise has ever experienced, missing the post-season for eleven straight seasons. Enter Jim Finks. Finks was hired by Halas in the middle of the 1974 season to take over as general manager of the franchise, and the man did not disappoint. Finks first pick in the 1975 NFL draft happened to be the best running back in NFL history, a certain Walter Payton.

Finks' coaching hire - Jack Pardee - was no slouch, either. Pardee had cut his football teeth under old-school football guru "Bear" Bryant while playing for him at Texas A&M. He went on to a 13 year career as an NFL linebacker, and Finks hired him as the Bears head coach only two years after he retired as a player. 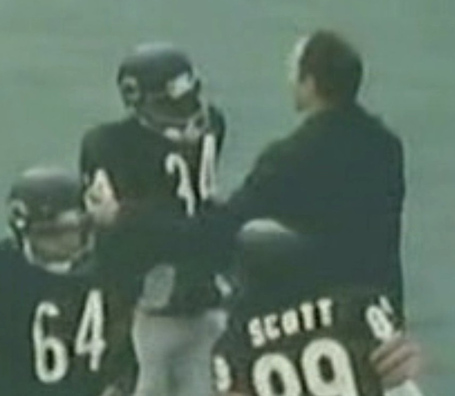 Pardee was able to make the switch from player to signal-caller without missing a beat. The 1975 Bears were 4-10, but the Bears hit the .500 mark the next season. With Finks continuing to put the pieces in place, 1977 would prove to be Pardee and the Bears' breakout year. After surviving a tough 1977 schedule with a 4-5 record, Pardee's Bears would face their greatest roadblock to the division title: the reigning Minnesota Vikings.

The 1970s Vikings were feared for two reasons - the stellar play of Hall of Fame quarterback Fran Tarkenton and the beastly play of their defensive line, the so-called "Purple People Eaters." The Vikings defense knew what they had to do to beat the Bears - stop Walter Payton. Pardee had a plan of his own, however. If you can't get through the heart of a defense, run around it.

Pardee's plan worked. The first play from scrimmage, and Walter was already off to the races: 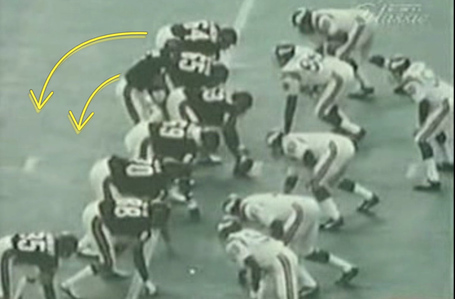 Pardee knew he wouldn't get far trying to block Vikings defensive line coach Buddy Ryan's front four, so he had QB Bob Avellini pull the left tackle and guard to open up the edge for his star running back. Here's the play as Payton received the hand-off: 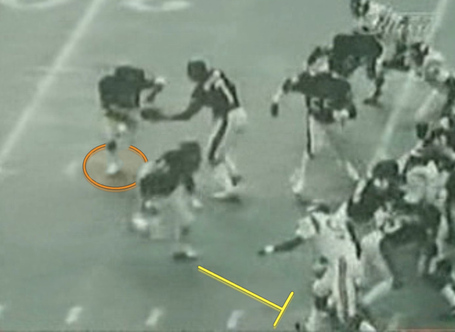 With fullback Roland Harper clearing out the right defensive end and the pulling offensive linesmen taking care of the second level of the defense, Payton was able to get deep into the secondary before finally getting shoved out of bounds: 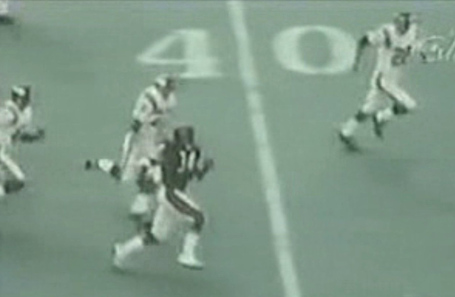 This 20+ yard first play was far from the last time that the Soldier Field crowd would be treated to the sight of Vikings defenders trying to chase down the phenomenal running back. Pardee was a gambler of a coach, and found himself on the losing end of a fake punt and fourth-and-goal attempt in the first half. Despite losing these two scoring opportunities, Payton rumbled in for one touchdown and drove the Bears down the field to set up a late second quarter field goal, giving the Bears a 10-0 lead at halftime.

While Payton's offensive line was getting the better of the Vikings defensive line, the Vikes' big uglies punched back early in the third. They broke through the Bears punt-protection, recovered the blocked punt, and ran it in for a touchdown to make the game a competitive 10-7. Pardee didn't veer from his ground-and-pound, touchdown or nothing approach, though. The scoreboard remained unchanged through the third quarter thanks to a Bob Avellini fumble on yet another fourth-and-goal, but Walter Payton had tacked on another 80+ yards to his 131 first half yards with edge runs like this pitch: 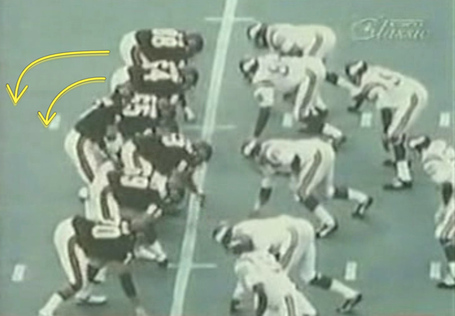 On this 20+ yarder, Pardee once again wisely chose to go around the Vikings front instead of through it. He pulled his left tackle and tight end on this pitch out to Payton, who then needed only one cut to get into the open field and chunk off another pile of yards for the Bears: 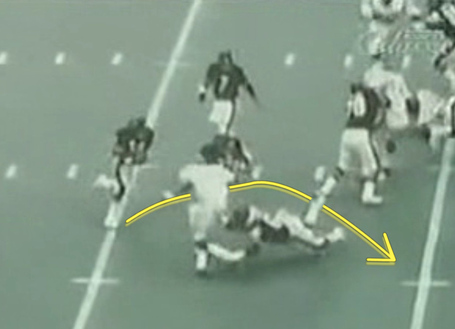 With the fourth quarter winding down, Payton had hit the 200 yard mark, but he still had a little something left in the tank. On his final big play of the day - a draw that perfectly lured in the defensive line - #34 started out by zooming past the first two defenders and then leaping over the third: 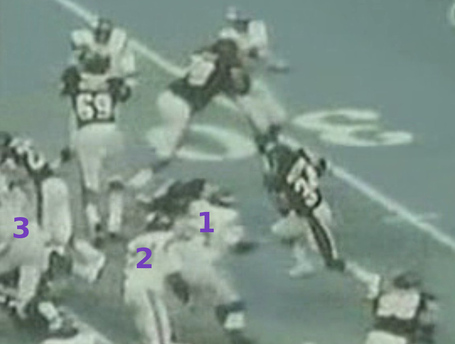 With the big guys in the dust, Walter hit his next gear and slid past the next two defenders on his way to the edge: 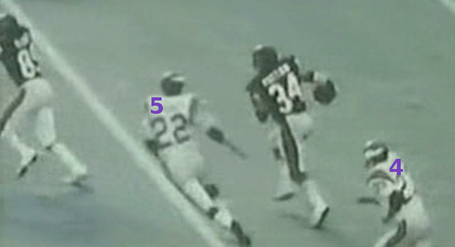 With his receivers now leading the way, Payton turned down the sideline and made it past yet another Viking: 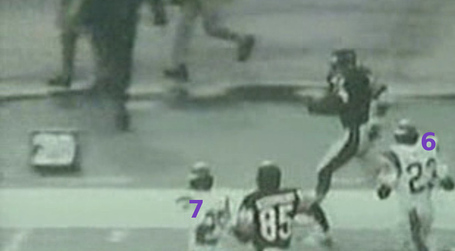 Seven proved to be one too many for Walter, however: 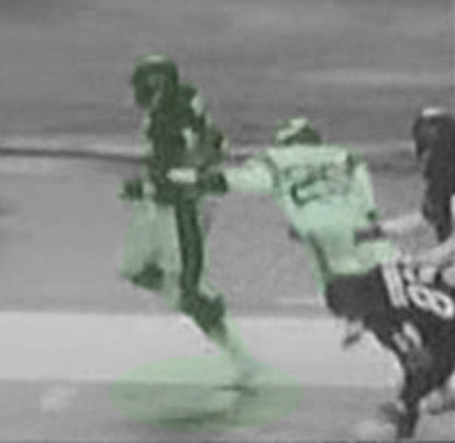 This seventh Viking finally got the job done by getting just enough of a push on Payton to force his toe out of bounds, but the Bear had inflicted 58 yards of damage along the way. Walter would get his final yards of the day on another fourth-and-goal attempt at the end of this drive. While Payton didn't get to paydirt from the 6, his final 4 yards cemented a new single-game rushing record: 275 yards. The Bears defense held off the final Vikings drive, giving Chicago the tie-breaker that eventually decided the division and earning Pardee the biggest win of his career.

Pardee wound up leaving the team after a one-and-done playoff appearance, getting a better deal from his alma mater Redskins than Halas was prepared to offer. Finks somewhat unwisely promoted assistant coach Neill Armstrong to replace him, but Finks stole Buddy Ryan from the Vikings and made him the Bears' new defensive coordinator. Pardee's basic football philosophy - a run-first (and second) offense coupled with an attacking defense - remained in place under this new coaching regime. Armstrong proved unequal to the task of achieving greatness, but his replacement - a certain Mike Ditka - was able to build upon Pardee and Finks' foundation and return the Bears to where they belonged - on top.

Pardee's name does not carry the cache of the two Bears greats who bookended his coaching career in Chicago, but for at least one season, he proved that the post-Halas Bears could still contend for the NFL crown. Jack Pardee also helped carve Walter Payton into NFL history, coaching him past a sub-1000-yard rookie season all the way into the record books.

Somewhere, Pardee and Payton are shaking hands one more time to celebrate a job well done.