The Bears stunned many by drafting Kyle Long with the 20th overall pick in last week's draft. Reach or no, here's how his skill set will fit into the blocking schemes of offensive coordinator Aaron Kromer.

Love the pick or hate it, we can assume Kyle Long is already pencilled in to start Week 1 at guard. While Long is not long on football experience, he has impressive athletic abilities that will translate well into the blocking schemes of Aaron Kromer. Let's take a look at a couple of ways Kromer can exploit the amazing mobility of Long and how Long did in similar situations on the field for Oregon.

Long's most impressive trait - the reason Phil Emery was so enchanted with him - is his speed. I had one of the games last season that he started at guard - USC vs. Oregon - cued up before the first round was over. His in-line blocking abilities are solid, but what jumps off the tape is his ability to be at any spot on the field when the play calls for it. In other words, the big guy can move.

While Long will ultimately have to make his living going against DTs and DEs at the line of scrimmage, his speed marks him for a perfect lead blocker on plays like the screen. Not only can he get to the point quickly, he can keep up with the linebackers and DBs he will face once he's there. 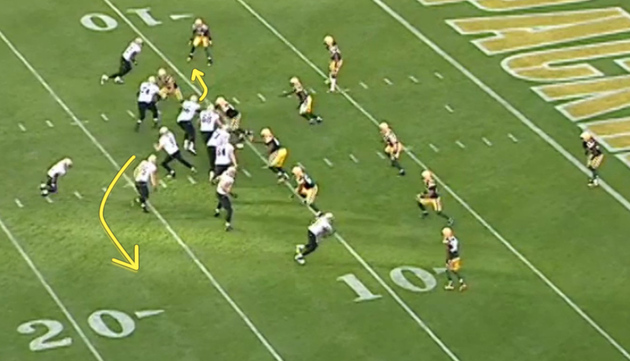 This Kromer play from 2012 is a perfect sell to the Packers defense. Drew Brees bootlegs out to his right, and three offensive linemen sneak over to the left. With all Packer eyes on Brees, Kromer has gotten exactly the matchup he wanted: his guard can quickly pop the one linebacker in the way to break the RB out in the open with only two DBs in between him and pay dirt. 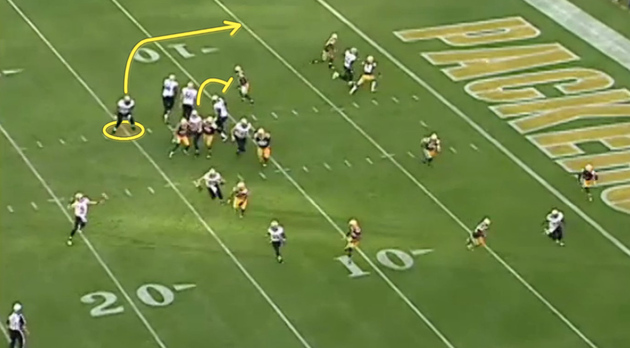 Long's speed makes him more than capable of beating linebackers to the point of attack in plays like these, and what he does once he's there can and will be improved by coaching. Let's look at him on the screen, this one to the right: 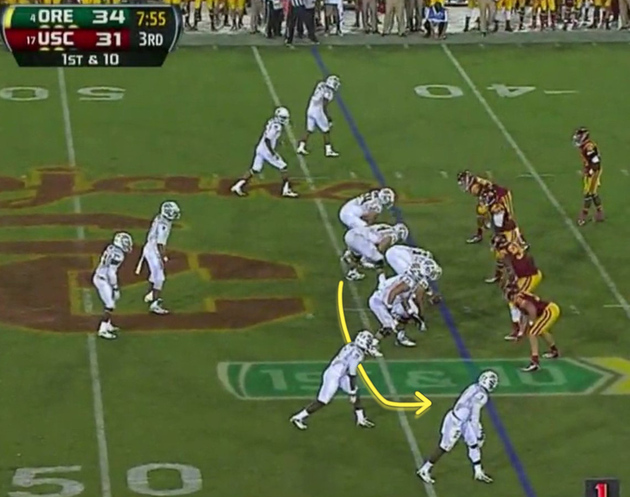 Again, the guard is the key blocker on this screen. Long has to run from the left guard spot to the right slot at the snap, and he gets there with time to spare. 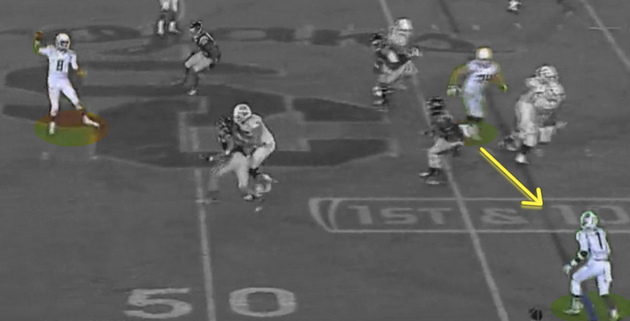 The right defensive end sniffed this one out pretty well, but Long's hustle got him to where he needed to be. 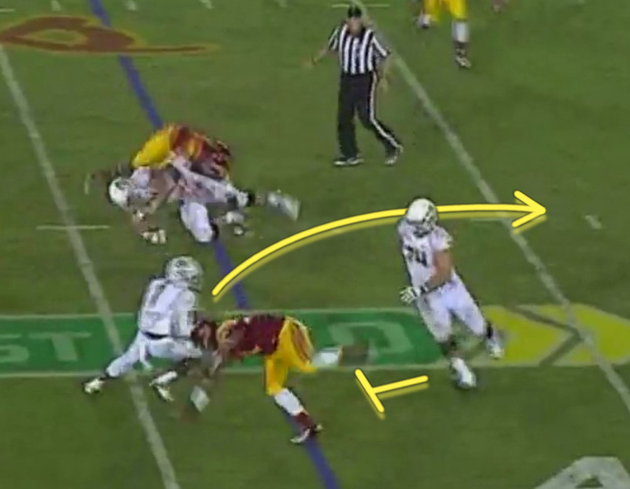 Long rallies to stop the defensive end from regrouping and making the tackle, and the wide receiver gallops on for fifteen.

Aaron Kromer uses his guards as a lead blockers as much as anyone else in the NFL. Faster guards are required for successful pull blocks: they not only have to get across the formation, but they have to beat any linebacker who reads the play to the point of attack. Here's a Kromer play to show what I mean: 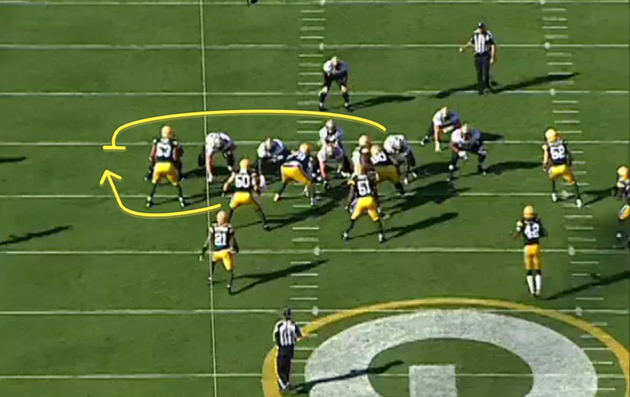 The left guard is going to hustle across the formation at the snap and block the first player he sees. In this case, that player is linebacker AJ Hawk (50), who reads the run and heads in to engage the blocker or make the tackle.

We'll ignore that the H-back on the left wing at the snap blew his block and let Clay Matthews into the backfield untouched, but you can see the guard (highlighted) is taking his sweet time about getting to the edge. Matthews beats him to it, but Hawk's got a clear advantage in positioning. For this play to succeed, you need a guard with hustle. 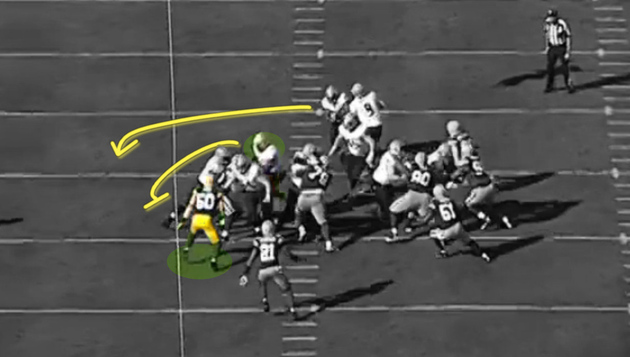 Long has that hustle. Here he is on a pull block, running straight at the camera while the ball is being handed off: 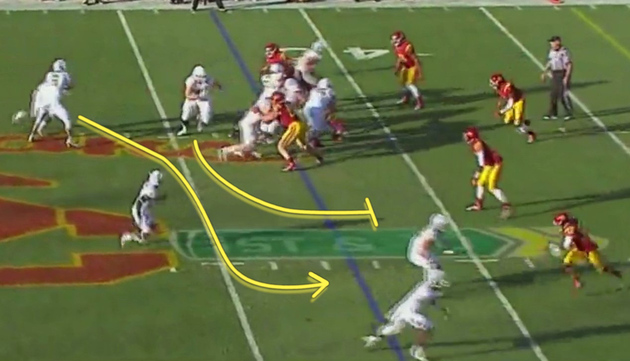 And here is Long and the running back a moment later: 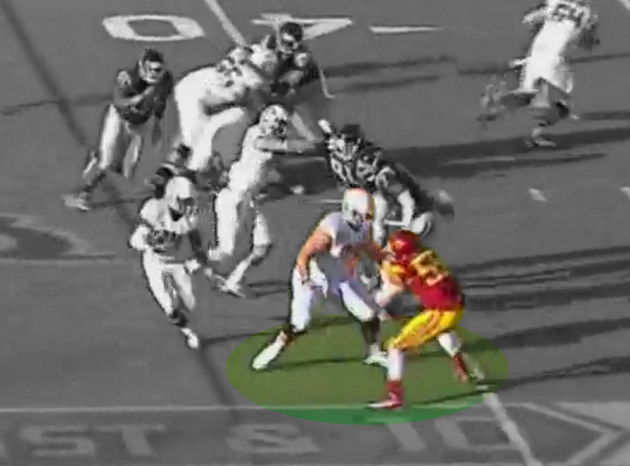 Even though the USC linebacker had a full view of the play developing, Long races into his position and is able to get his running back past the linebacker and set up a nice first down gain.

The kid can hustle, as you see later in this play. By the time the back is six yards downfield, Long (circled) is once again ahead of him trying to throw another block. 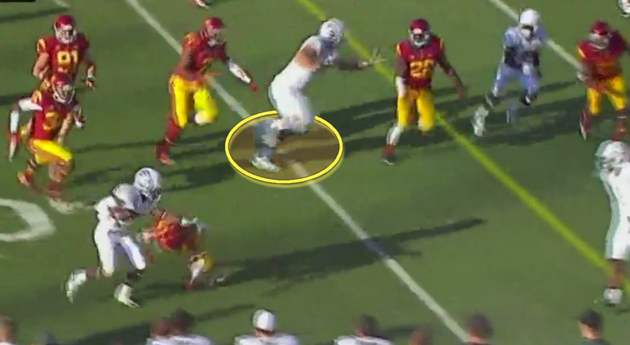 One of the main complaints against the Long pick was that the team reached for a linesman when there were so many offensive "weapons" still on the board. The way I see it, however, Long is an offensive weapon - his athletic ability can pay major dividends in the run and pass game. Trestman will be able to count on Long to be where he needs to be at the right time, and Kromer can help him improve at knowing what to do once he gets there.

Is Long the polished product at guard that Chance Warmack and Jonathan Cooper are? No, but that's why those two went in the top ten overall and Long fell to us. Still, if Long did nothing between now and the first snap of the regular season, he would be a more-than-serviceable option at guard based on his performance against USC. With a bit of coaching from Pro-Bowl-maker Aaron Kromer, however, he can develop into something a lot more than adequate.