Phil Emery rolled the dice in the seventh round of the draft on Washington State WR Marquess Wilson. Yes, Wilson's off-the-field issues are well documented, but his on-the-field work could be just what the Bears need on offense.

After Phil Emery's first two picks - Kyle Long and Jonathan Bostic - the pick that intrigues me most is Marquess Wilson. Declared a potential first-rounder at various points in his college career, he pulled a Chilo Rachal and walked away from his team in the middle of last season. His draft stock plummeted accordingly, but the Bears took a chance on Wilson with the team's final pick.

I'll leave Wilson's off-the-field claims of abuse at the hands of head coach Mike Leach - claims that Wilson later recanted - for others to debate. Let's assume the kid learned from his mistake. What are Marquess Wilson's chances of sticking to the roster? Can he be a Brandon Marshall-esque draft steal, or is he destined to become another Dane Sanzenbacher and "drop" off the roster?

At the start of Washington State's biggest game of the year - their chance to upset Pac-12 rival Oregon in Week 5 - Wilson looked more like a Sanzenbacher than a Marshall. Like many a Jerry Angelo WR pick, he started off the game with four straight drops, each of them a catchable ball:

Facing double coverage in most of these plays, Wilson did do a good job of getting himself in position and attacking the ball. He just couldn't reel them in.

After this very slow start, however, Wilson turned it on and ended up the lead receiver in the game. If and when the seventh-rounder takes the field, he's not going to be facing a press corner and a deep safety - that honor will go to Brandon Marshall. Wilson needs to fit the role of a #2/#3 WR in the West Coast Offense to earn a spot on the Bears roster, and for the rest of the game, he showed that he can fit the role quite nicely.

In a quick-passing offense like Marc Trestman's, it's up to the WRs to squeeze every yard possible out of the play. Wilson's no speedster - he runs a 4.51 40 - but what he lacks in speed he makes up for in strength. In this play, he ran a quick curl underneath the corner and made an easy four yard reception: 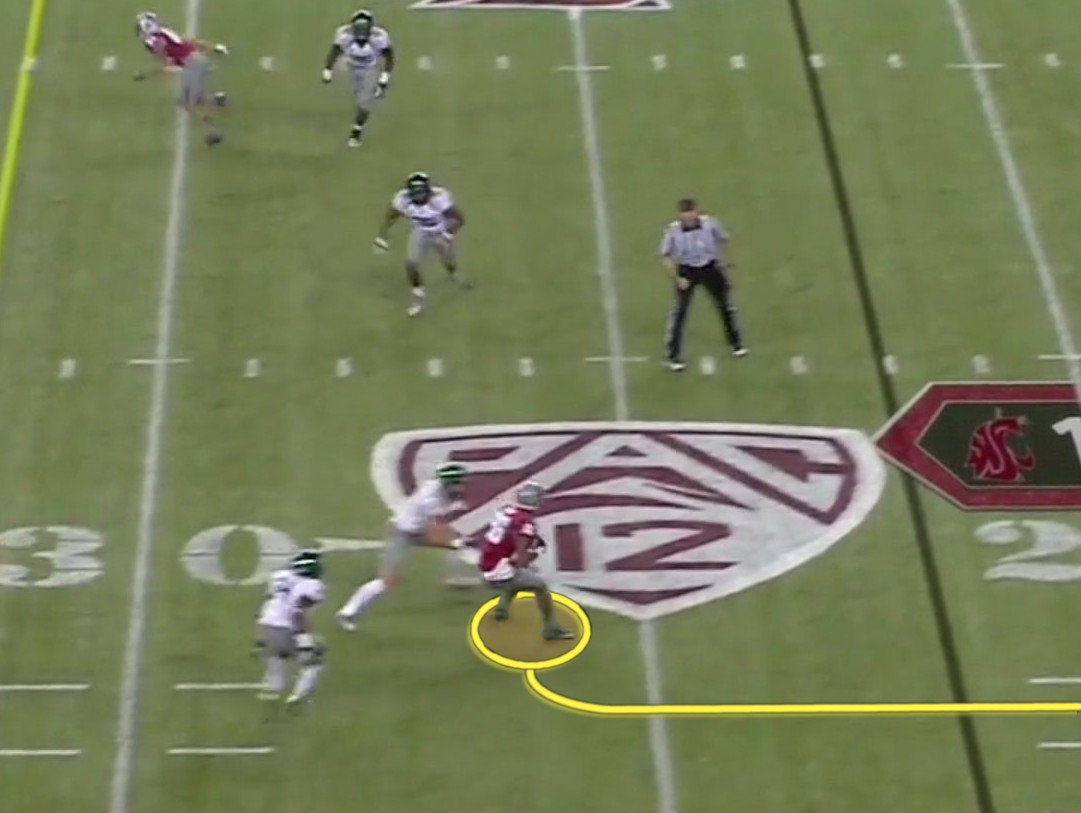 With the first defender already having a hand on him, Wilson turned it upfield to get every extra inch he could. Ultimately, Wilson took three defenders for a three yard ride to finish the play. 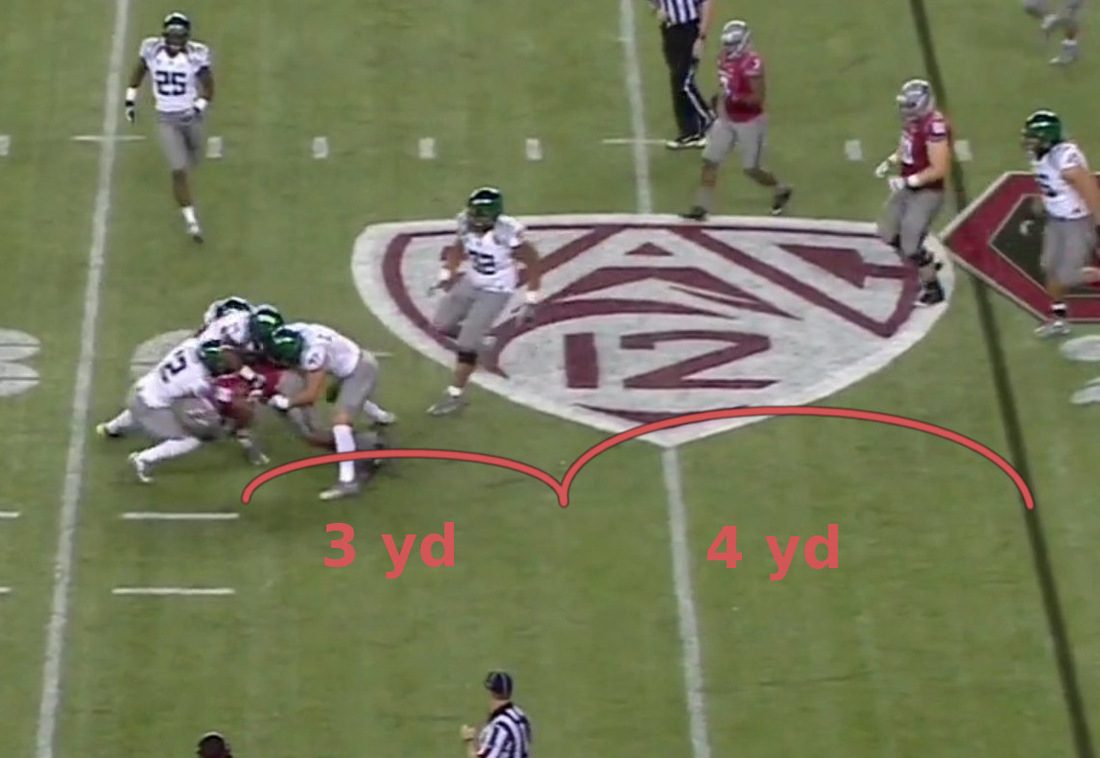 Against the softer coverages you would anticipate Wilson getting in the NFL, his ability to power through tackles like this could pay major dividends. When receivers can turn four yard catches into seven yard gains, the offense will be in many more comfortable, short-yardage second and third downs.

Make Your Own Space

If Wilson's going to be seeing single coverage, he's got to be able to get himself open. A lot of this work gets done through coaching, as many WCO routes are designed to force DBs to cover deep and then take the "free" yards underneath the coverage.

It's up to the players, however, to sell the DBs on the deep route. On a play-action third down play like the one we'll look at next, the defenders have to think deep ball first - they can't get sucked in early and let a touchdown pass sail over their heads. Knowing this, Wilson perfectly sold the deep route and then cut it off to end up wide open. As the ball is snapped, you can see him go immediately into a full sprint, sending the Oregon defender across from him into an equally hasty retreat:

The cornerback doesn't bite on the action in the backfield, but Wilson's moves in space proved to be just as deceptive. Having set up his defender to guard against the long ball with his hard sprint off the line, Wilson deftly cuts his route to the sideline.

It's hard to do this sort of fake-out justice with stills, but YouTube's got me covered for video on this one. Wilson ends up following the yellow line to make playbook-perfect pivot on his five yard square out route, but his long strides and hip movement sold the DB on the go route shown in red. Wide open, Wilson reeled in the ball for the first down: 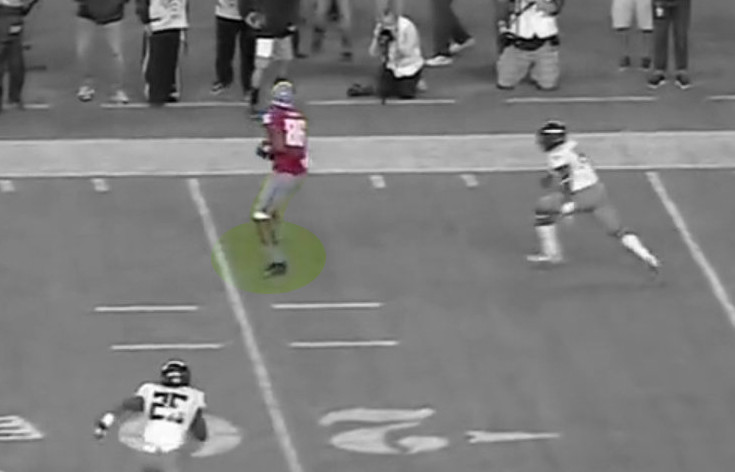 Taking Advantage of the Deep Ball

Short, quick passes are a great way to get first downs, but the long ball is a better way to put points on the board. Jay Cutler can laser balls 15-20 yards down the field quite easily, and at least on this play, Wilson looks ready to get underneath them. While he did struggle early in the game on a couple of these intermediate routes with some bad drops, this next play is what the Bears are hoping Wilson will bring: 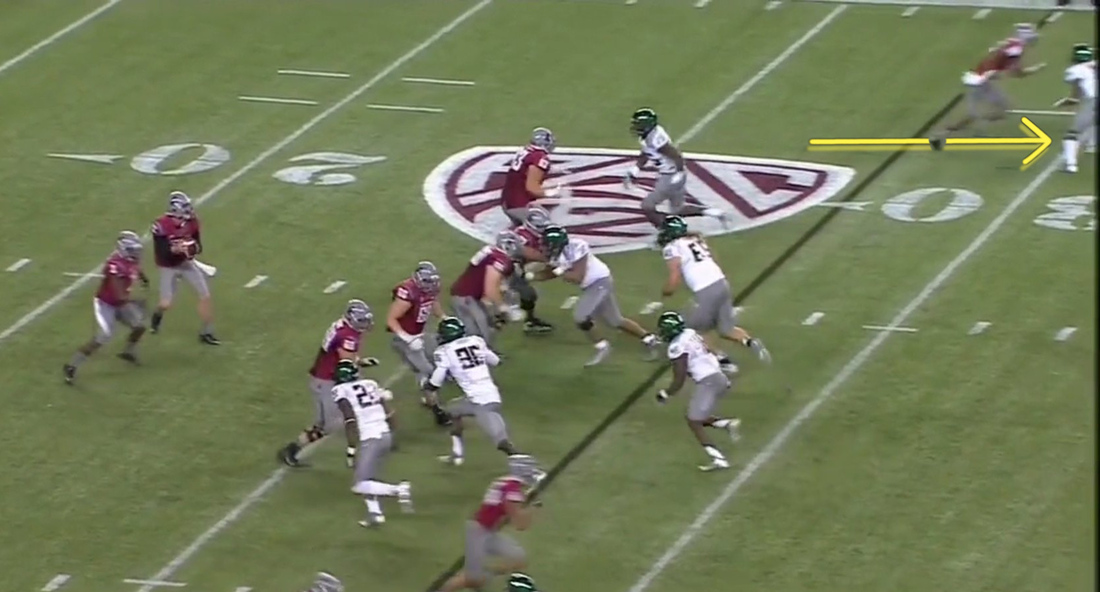 Wilson set a line towards the sideline twenty yards downfield. Battling the Oregon defender most of the way there, Wilson got himself into position in front of the DB by the time the pass was thrown. The pass, however, was lofted way up into the rafters, giving the defender plenty of time to see the ball in flight and make a play on it. 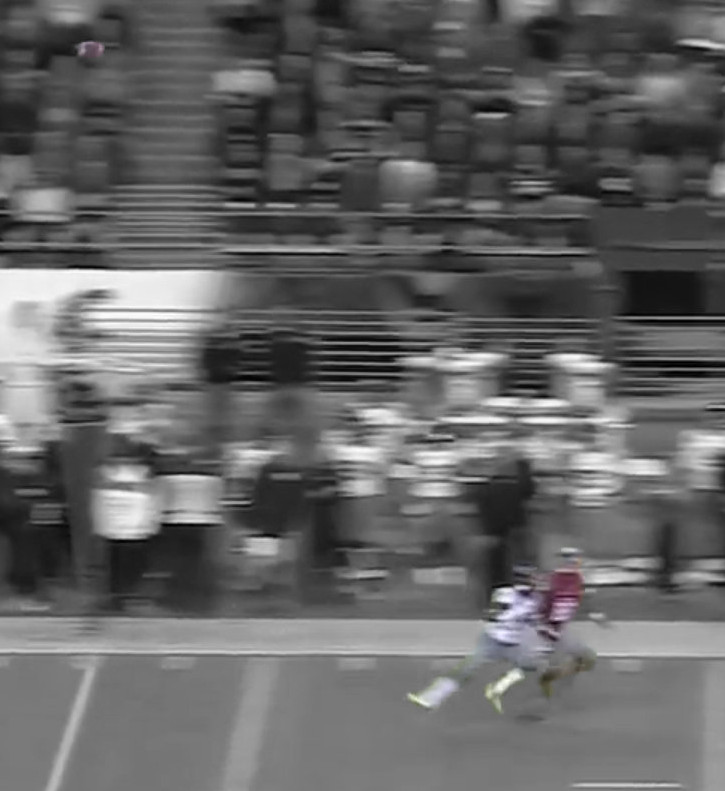 With a well-thrown ball, Wilson could have jetted ahead of the defender and been wide open. With the ball a bit short, though, Wilson slowed himself down and adjusted his body to be in position to make the catch. Better still, Wilson's read and adjustment of his route left the defender with only one option: to flail after the ball in an attempt to break up the pass. 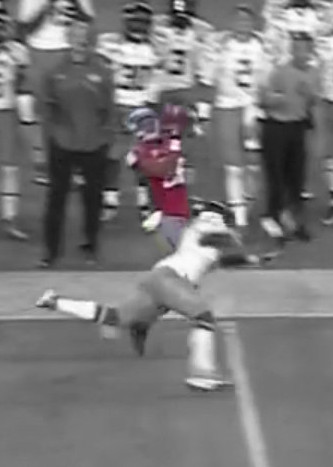 Wilson showcased his ability to get his body in position to make the catch, and ended up with seventeen yards on this one.

Can Wilson earn a roster spot on this Bears team? If he lives up to his original billing, he certainly can. If Wilson's penchants for drama and drops comes back to the fore, however, he'll be yet another seventh-rounder that didn't make the cut. Even with this downside in mind, I can't help but like the pick - if Wilson realizes even some of his potential, he can contribute to this team on offense. With a skill set that should fit nicely into Trestman's offense, Marquess Wilson has all the upside you could want.