The Superfans were given the leftovers in the 2013 Chicago Bears Schedule Breakdown series, and they weren't very happy about it. Luckily for the them however, the guesswork done by WCG staff left the Bears with a playoff bound 11-5 record, so they were able to predict the post season. Ladies and gentlemen, The Superfans... 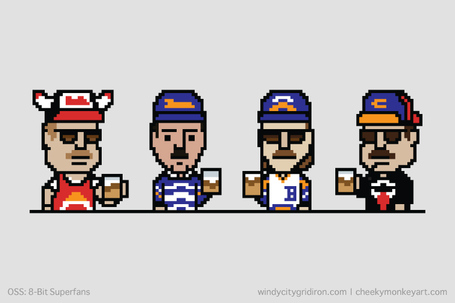 Pat - Welcome everybody to the annual Bill Swerski's Superfans Prediction special, and as you can plainly see I am not Bill Swerski.
Carl - No you're not Pat, Bill is protesting the blatant trademark infringement that was predicated by the powers that be here at Windy City Gridiron.
Pat - Making the Chicago Bears season prediction has been a Superfans staple here at WCG, long since before we were made official Writers on this fine site that is dedicated to the greatest team in the history of the NFL, Da Bears.
All - Da Bears!

Carl - This year the honor of running through our schedule was divvied out to four of our compatriots in Bears fandom, and broken out into 4 separate articles.
Todd - Can I just say right off the bat that some on those predictions were way off base.
Pat - Agreed.
Todd - Can I just say that some of those predictions were outright wrong.
Carl - Yes.
Todd - Can I just say that I haven't had a Kielbasa is about 2 hours.
Pat - That's a new record.
Carl - Well done my friend, that new heart healthy diet is really working out.
Pat - But back to the matter at hand, and our take on the aforementioned theft of our annual prognostication. Carl tell us how they usurped our annual event.
Carl - Well Pat, in a nod to the 3rd greatest coach in the history of our storied franchise, Lovie Lee Smith, Windy City Gridiron broke their Chicago Bears' season predictions into 4 quarters.
Pat - We never needed four separate segments.
Carl - No we did not my friend.

Pat - Quarter numero uno was speculated upon by Kay Paradiso, and she almost got it right. She had our beloved boys losing...
Todd - (interrupting) Blasphemy...
Carl - For shame Kay, for shame...
Pat - ... losing to the Minnesota Vikings to go 3-1 in the quarter.
Todd - Kay used to be my favorite WCG columnist, but now I have to question if she really knows the game of football at all, I mean us losing to the Vikes?
Carl - Her big (air quoting) "argument", is that Adrian Peterson will run all over the Monsters Of The Midway, and to that I say...
Todd - (interrupting) Blasphemy...
Carl - ...yeah, Blasphemy.
Pat - I see a certain defense, now led by a certain double nickle on the weakside, chasing down Adrian Peterson when ever he attempts to gallop free, and if by some slim chance he's blocked out of the play, then our latest and newest Pro Bowl defender, Henry Melton, will penetrate the backfield and take him down with extreme prejudice. Bears win in a rout, 69-28. Da Bears.
All - Da Bears!

Pat - The WCG staffer that wrote the second quarter prediction was even more out of his ever loving mind. Sam Householder, if that is even his real name, had our fellas in Navy and Orange losing to the Saints, Redskins, and Packers.
Todd - When I finished reading his prediction, I sent him a scathing email questioning his Chicago ties and his football I.Q., and like the coward he is, I never heard a peep back from him, just some response from someone named Mailer Daemon. First off, what a stupid name, Daemon is even sillier than Householder. And second off, where does Sam get off having someone else answer his email? Where does he get off big timing me? Who does he think he is?
Pat - Normally this is where I would correct my burly Bears brethren, but I kind of like the idea of Todd getting pissed off every time an email is returned to him by the Mailer Daemon.
Carl - And knowing Todd, and his limited computer skill set, that's probably quite a bit.
Todd - What if Mailer Daemon and Sam Householder are one in the same?!?!?
Pat - Back to the outlandishly wrong predictions by Sam, there's no way we drop a game to the left tackle depleted Saints. We snagged Drew Brees' blindside protector, Jermon Bushrod, so now who's gonna stop Julius Peppers from picking up the diminutive Brees and putting him in his pocket?
Todd - Bushrod.
Pat - No he's a Bear now Todd.
Todd - I know, I just like saying Bushrod. Bushrod. Bushrod.
Carl - There's also a zero chance that we lose to the Redskins. There's also zero chance Robert Griffin III is back playing by week 7 after shredding his knee.
Pat - I have it on good authority that RGIII has already planned to miss this match up with the ferociously revamped Mel Tucker coordinated Tampa 2.2.0, and the earliest he will return for the 2013 season is the following week.
Carl - And of course there's zero chance we lose to Rex Grossman.
Pat - Actually my friend, Kirk Cousins is the back up in Washington.
Todd - Bushrod.
Carl - Actually my friend, Kirk Cousins plans to bow out of that game as well, because, well, he really doesn't want to face Pep and Company either, leaving the task to the uber-confident, and former Bear, RGSC. Charles Tillman will pick off his former teammate about 6 or 7 times, and return at least half of those back for scores.
Pat - Sam also has us losing to Green Bay, and that's the dagger that cuts the deepest. We recognize that we haven't had the best of luck lately with the Packers, but this is the year we break the schneid.
Carl - But of course. Those three games will favor the beloved by a combined score of 256-9. And if your scoring at home, that's Da Bears, Da Bears, and Da Bears.
All - Da Bears!
Todd - (whispers) Bushrod

Bill - (Busting in with a fresh platter of Polish Sausages, Deep Dish Pizza, Italian Beefs, and 4 pitchers of Beer) It's high time I end my strike against The WCG Man, and get involved in our show. And it is Our Show. It's always been our show and for the love of Ditka, it'll remain our show, and on this I swear, or my name isn't William, you can call me Bill, Swerski.
All - Bill!
Bill - The 3rd quarter for Bears predictions fell on long time WCG'er Kev H, and dare I say Kev absolutely nailed it.
Pat - What does the H stand for?
Carl - Hell if I know.
Pat - With as good as he is at making predictions, I believe it's Hunchmeister.
Carl - Hammer?
Pat - I don't think anybody knows.
Todd - Bushrod.
Bill - It's safe to say it's not Bushrod, but if he keeps up his great work, the H will stand for Honorary, as in Honorary Superfan. Kev predicted a clean 4-0 sweep in the 3rd quarter of the season for a certain West Coast Offense running Midwestern town, that no longer gets off the bus running, but they get off the bus kicking ass. Da Bears.
All - Da Bears!

Bill - And that leads us to the 4th quarter and T.J. Shouse's predictions.
Pat - What does the T.J. stand for?
Carl - My guess, Terrible Job, because of the terrible job he did at predicting. He has us losing to the cheese sucking Packers again!
Bill - I was really with Terrible Job up until week 17, but then he had to have Green Bay get the win.
Todd - Bushrod.
Bill - Finishing 3-1 in the final quarter of the season would place the Bears at 11-5 according to our Bears colleagues, and therefore clearly in the playoffs. Even though our predictions have the Bears doing slightly better...
Pat - (interrupting) 16-0!
Bill - Thank you very much Pat, but their 11-5 prediction, in our humble opinion, will be good enough for one of the 1st round NFC byes. So our prediction for the Divisional round of the playoffs will see us defeat the wildcard round winning Seattle Seahawks by a score of 52-0. There's no question the Seahawks are good on paper, but by the time the playoffs roll around, I expect half of their starters to be suspended for PEDs. They can squeak out one lonely playoff wildcard win, but Da Bears are too damn much!
All - Da Bears!

Bill - I see the NFC Championship being either contested in San Francisco or Chicago. We'll either be on the road against the NFC West Champ Niners, or home hosting the wildcard Pack.
Pat - As much as I hate to admit it, Green Bay will probably be our opponent.
Carl - I disagree, the 49ers are on a mission to get back to the Super Bowl.
Bill - I'm torn myself, I can't decide who will be on the other side of the bracket to face the mighty Bear.
Todd - Why are we arguing over who will be the likely whipping boy of our soon to be NFC Champions? Irregardless if its San Fran or if it's Green Bay, they are going down to Da Bears!
All - Da Bears!

Bill - Leave it up to Todd to be the voice of reason. Well done my friend.
Todd - Bushrod.
Bill - (shaking his head at Todd) And that takes us to SBXLVIII and the New York / New Jersey area for the expected coronation of the Super Bowl Champion Chicago Bears. I predict a Chicago vs. Indianapolis Super Bowl tilt, with some well deserved payback going out to the team that did you know what, back in you know when, to you know who.
Todd - I know what you mean. Bu...
Bill - (interrupting) If you say Bushrod one more time.
Todd - Bush... Michael. Bush.
Bill - Until next time my friends, Bear Down.

MORE FROM WINDY CITY GRIDIRON AND THE SUPERFANS

Editor Note: The news of Brian Urlacher's retirement broke after the Superfans conducted this show. The Superfans would like to send their best wishes to 'Lach, and after the requisite mourning period, they will pay their proper respects.

Breaking Down the 2013 Chicago Bears Schedule