Bears second-rounder Jonathan Bostic might be a bit of slouch in pass coverage. Here's why that doesn't matter.

Share All sharing options for: Bears Playbook - Jon Bostic Vs. the Mobile Quarterback

The knocks on second-round pick Jon Bostic are accurate - he comes up a bit short in covering faster RBs and TEs in deep coverage. The biggest weakness in the Bears defensive armor last season wasn't its pass coverage, however. The Bears biggest defensive problem was their inability to contain the new generation of mobile quarterback. Add on a win against Colin Kaepernick's 49ers and a stop against the Seahawks' Russell Wilson, and the Bears still would have been sitting at home the first week of the playoffs... because they were on a bye.

Welcome Jonathan Bostic to the Bears. He is not a prototypical Tampa 2 MLB, to be sure. What he lacks in the pass coverage abilities of a Brian Urlacher in his prime, however, he makes up for with the work he does on the other side of the line of scrimmage. Emery was right to praise Bostic's football intelligence. At least in the game his Gators played against seventh-ranked South Carolina last season, he was able to out-read and out-hustle the Gamecocks.

First, let's look at Bostic in coverage to see what everyone means about Bostic's weakness in this area. The play is a simple four verticals by South Carolina. Bostic reads it all the way, and slides his way back into the zone underneath the receivers to the QB's left: 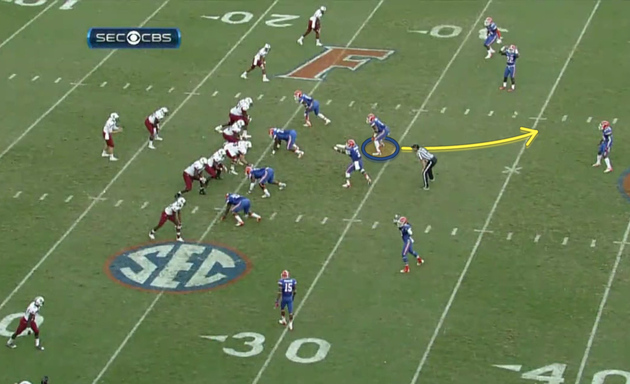 In this second look, you can see the issue. Bostic has the best straight-line speed of any inside linebacker in this draft, but it just doesn't translate that well into his drops yet. He read the QB's eyes and "felt" the receivers behind him, but he's still a bit out of the path of a potential pass, imagined in red. A step or two faster or a step or two more to his right, and he'd be more where you want him.

What Bostic lacks in speed in his drops, however, he makes up for in his speed getting back to the play afterwards. At least in this game, he never once had a short pass completed against the players he covered close to the line, and the slow-moving SC fullback here was no exception. Bostic sees Connor Shaw roll to his right after the pocket breaks down, and the linebacker rallies into a strong coverage position against Shaw's only dump-off option. 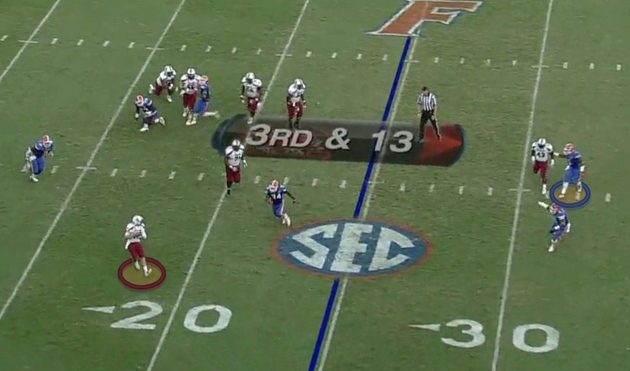 The ability to come back to the play is critical to defeating offenses designed around mobile QB, and Bostic was able to jam a passing lane at one moment and then rally into a short coverage the next.

Here's a more deadly version of Bostic doing just that. The Gators' D shut down Shaw (he of the 158.1 season QB rating) so badly he was benched, so this play had new QB Dylan Thompson roll to his left and look for the open man. At the snap:

Bostic rolls into zone coverage about ten yards off the line of scrimmage, but as soon as he reads Thompson's roll out, he changes directions and sprints into to force the pass: 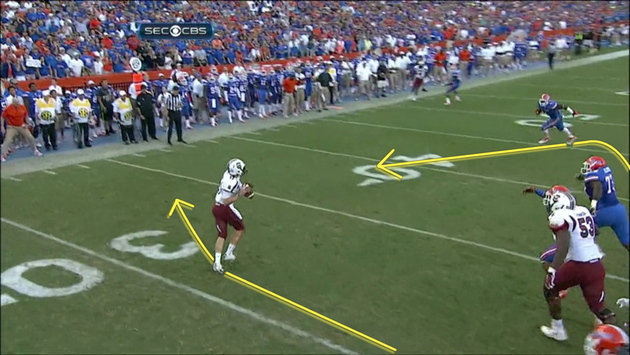 Again, Bostic's speed moving forward is what kills them. He closed quickly and shut down any chance Thompson had to run the ball, and left Thompson no choice but to throw it away: 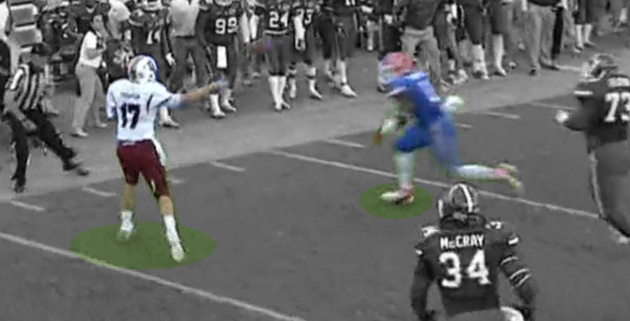 Last but certainly not least, there's the old "college play" itself - the read option. Russell Wilson declared that the Bears defense was vulnerable to this play "all day" during his 2012 matchup against Chicago, but Bostic has the antidote. The simple reason many in the NFL thought the read option wouldn't work at the pro level is that the play can be defeated by an intelligent, athletic defense, and Bostic brings both of those to the table. The first job of the middle linebacker is to make a read at the snap, and Bostic had this one sniffed out perfectly: 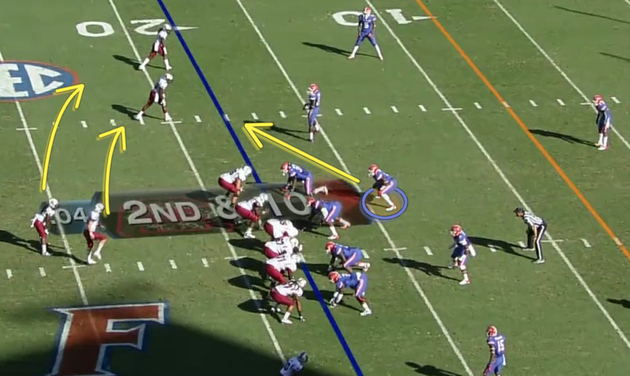 Quick review of the read option: the offense leaves a defender unblocked, and the QB reads this defender. If the defender goes after the QB, the RB gets the pitch, but if the defender takes away the RB, the QB keeps it. When the read player is a defensive end, he'll generally try to push the play inside to his linebackers, but when the linebacker is left unblocked, he'll force the run to the outside. Bostic did exactly that: he quickly closed in on the QB and forced the pitch. 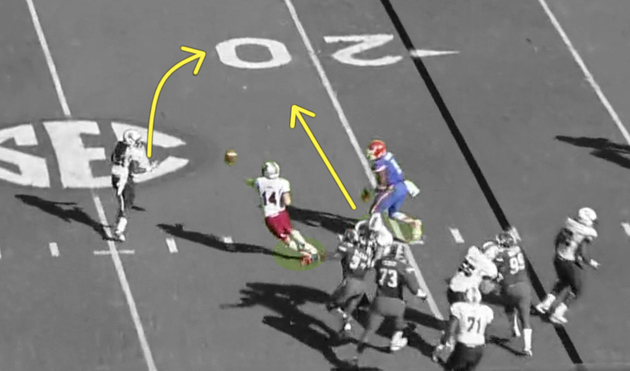 With Bostic's speed in his favor, however, the weak angle taken by the RB wasn't going to get him to the edge in time. The linebacker made South Carolina regret trying to option him out of the play by getting a tackle for a loss on this one: 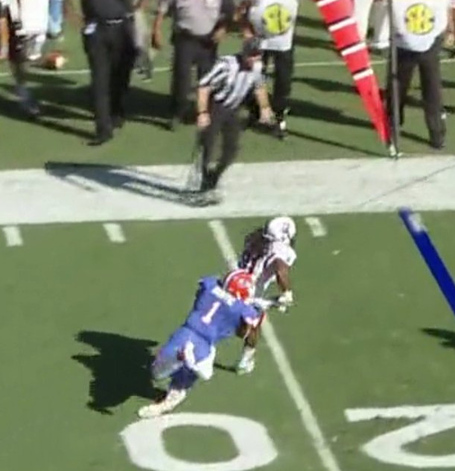 Bostic is not a great coverage linebacker, but you'd have to think that coaching can help him translate his speed running forward into hustle moving backward. You can't really coach pure speed, however, and Bostic has plenty of that. Drafting Bostic was the perfect response to the Bears' greatest defensive weakness last season, as the linebacker looks more than capable of reading and reacting to mobile QBs. He's no #54 - at least not yet - but Jon Bostic has the football intelligence and straight-line speed he'll need to man the middle of the Bears D.

More from WCG on Jon Bostic:

What's the Plan for Bostic?