In 2012, Phil Emery channelled his inner Angelo and took a safety in the third round: Brandon Hardin. Here's the simple reason he earned a redshirt year in 2012 and might be in trouble in 2013.

Share All sharing options for: Bears Playbook - What's the Deal with Brandon Hardin?

Bears fans might have hoped that then-new GM Phil Emery could help stop the safety merry-go-round that had been running during most of Lovie Smith's tenure, but 2012 third-round pick Brandon Hardin was far too tempting for the new GM to resist. This steady rotation of safeties was kept in motion by a combination of Injury and an inability to tackle, and while Major Wright and Chris Conte put together fairly solid seasons last year, Brandon Hardin seems to fit in with the Angelo model of "can't tackle, can't stay healthy" quite nicely.

For any defensive player to have success, he needs to stay on the field and make tackles when he's there. Hardin proved unable to do both. In his first taste of live NFL action - the Bears pre-season match-up against the Denver Broncos - Hardin simply looked bad. Let's take a look at a couple of his plays, starting with a demonstration of his matador tackling style.

On this play, the Denver running back was just making it into the second level of the defense, but Hardin made a good read and was in position to stop the RB. Here is the play, with Hardin and the RB highlighted: 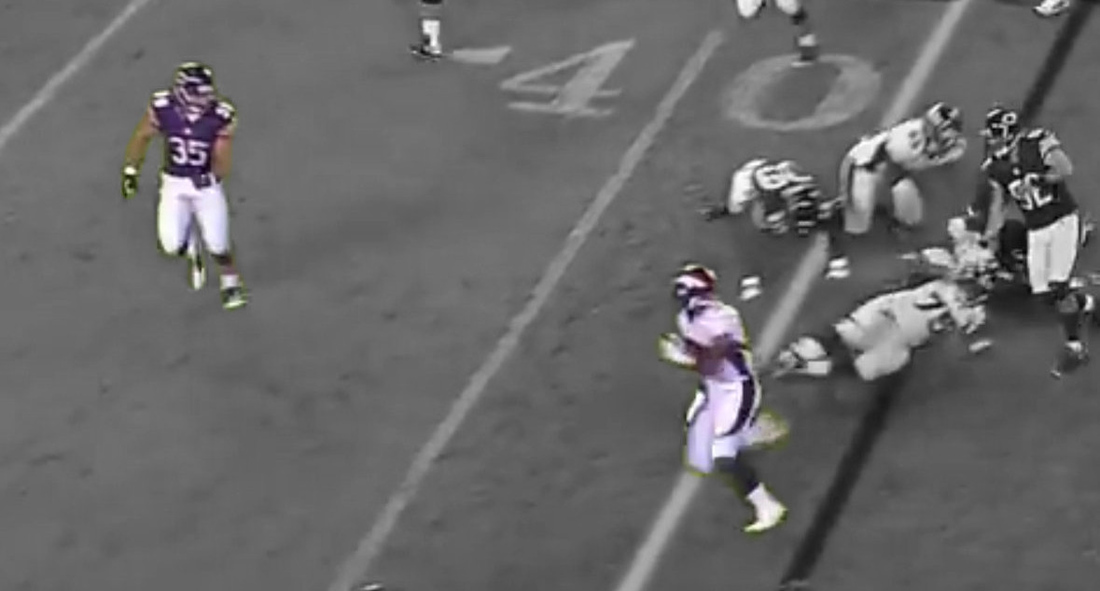 Hardin set the right angle to push the RB toward the sideline and be in position to make a tackle for a minimal gain. The tackling part, however, proved to be more difficult than simply getting there: 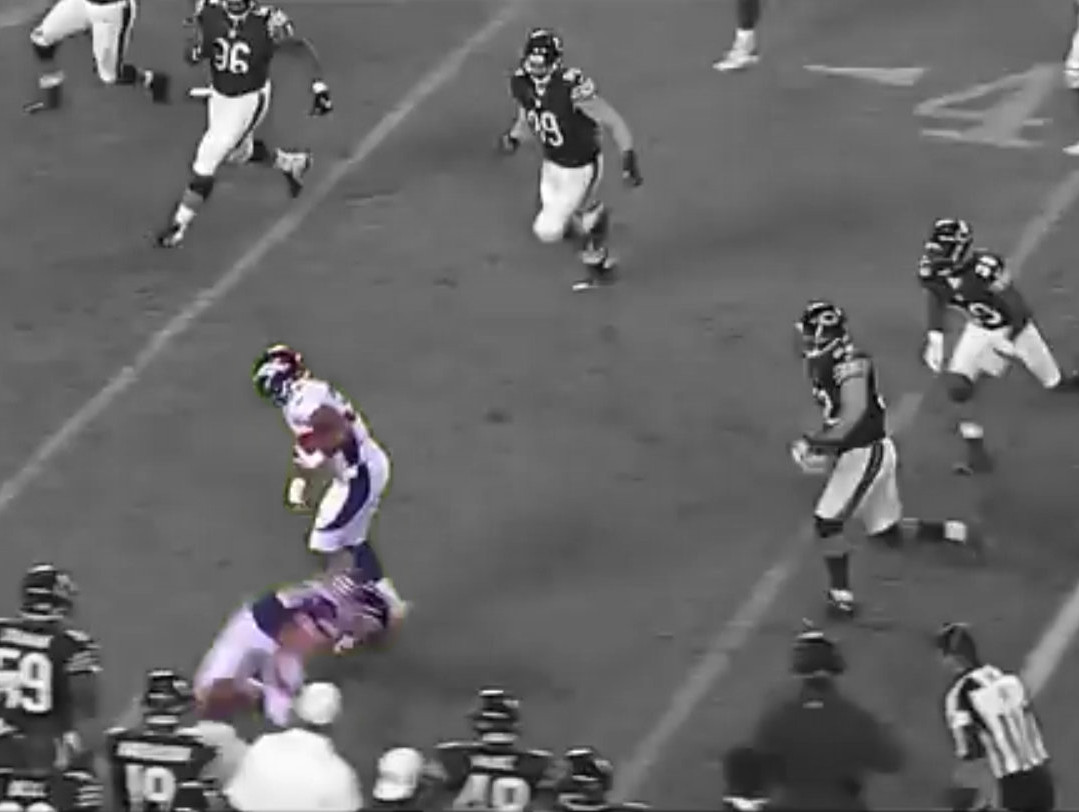 Ole! Hardin made a weak attempt to arm-tackle the Denver player, who was able to shrug him off and continue forward for a nearly 10 yard run. While Hardin's mess was finally cleaned up by the trailing defensive linesmen, you just can't trust a safety who can't make these kinds of open field tackles.

This same problem cropped up a few plays later on the drive. Hardin once again got himself in the right position to stop the RB. This time, instead of trying to arm tackle, he lowered his shoulder and seemed ready to stop the Denver back. While the conventional wisdom is that the "low man wins," Hardin's head-first dive into the RB let the Denver back blow past him and get extra yards on the play: 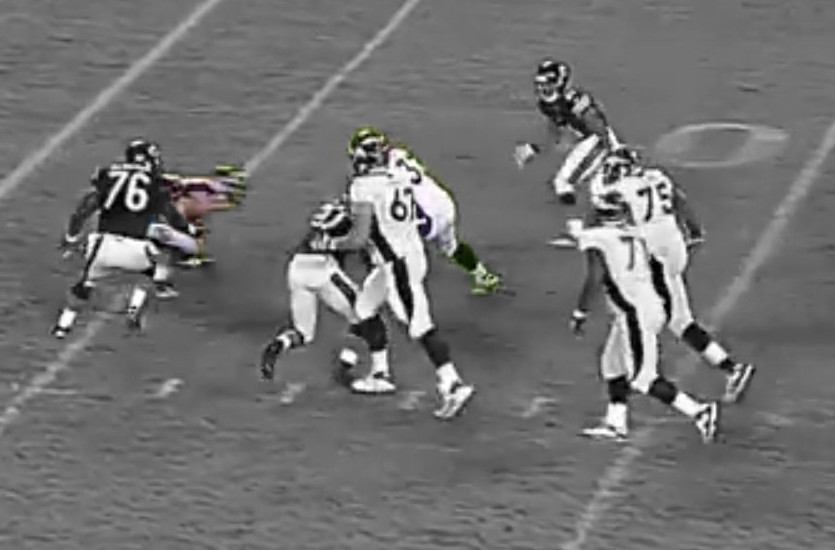 This isn't to say that there isn't hope for the kid. Major Wright struggled in space early in his career but has since turned into one of the brightest young spots on an ageing defense. Still, you have to cringe when you see the safety - the last stop between the opposing offenses and the end zone - is missing tackle after tackle. To cap off his no good, horrible, very bad football day, Hardin let the Broncos into the end zone on this one: 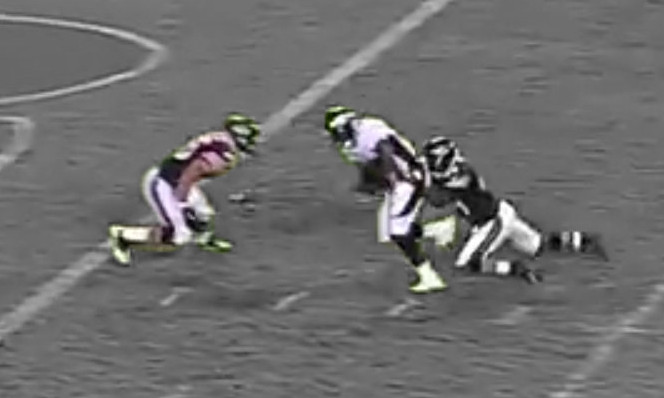 Hardin looks to be in a better fundamental tackling position here, but he broke it down a bit too soon. If Hardin would have pressed forward just one more step, this one would be down on the one. But because the rookie was relying on the receiver coming to him, the Denver WR was able to push over him to get the final yard and six points: 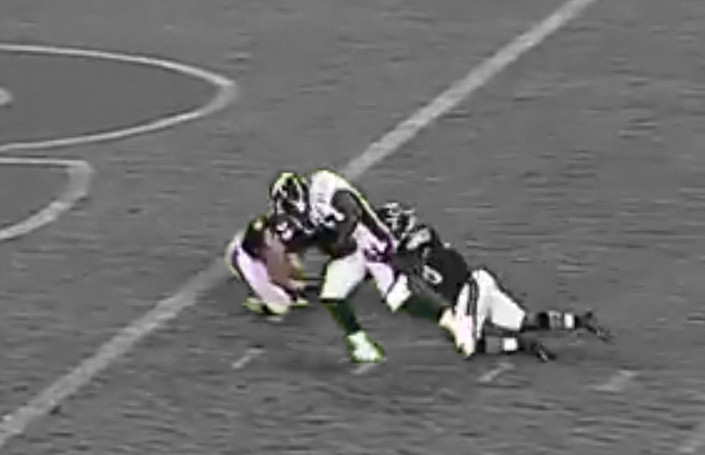 The flaws in Hardin's tackling style proved to be his downfall, as he injured himself trying to make an open-field tackle with less than perfect form - you can see that one in progress up at the top of the article. I'm not prepared to write Hardin off as (another) Emery gamble that didn't pay off, but he'll need to come out with a vengeance this pre-season to earn a spot on the 2013 roster.

Can Brandon Hardin turn it around in 2013? Hopefully, a full off-season of work on fundamentals, conditioning, and playbook study can pay sophomore dividends. Otherwise, let's hope that Wright and Conte stay healthy.

Tackling 101: Facemask on the football, see what you hit

Gridiron player safety: It's not as simple as taking away the helmets