Wide receiver might be the most overvalued position in an NFL offense, but GMs aren't the only ones paying too much heed and too many dollars to the big names at WR.

Share All sharing options for: Bears Playbook - Is Brandon Marshall Just a Decoy?

While Bears career yardage record-holder Johnny Morris might be one of the franchise's most underrated players, could it be that new single-season record holder Brandon Marshall is one of the most overrated? Kerry Berne at Cold Hard Football Facts makes the case that WRs simply don't do enough on the field to live up to the hype and salary in Epic Fail: The WR Class of 2012:

Bottom line: It is ridiculous, utterly ridiculous, to dish out megabucks to a guy who, in a great year, might touch the ball on just 5 percent of NFL snaps and do little to nothing 95 percent of the time...

We can hear the doubters clamoring now: "But wait, Mr. Cold, Hard Football Facts. A great wide receiver will open the field underneath for the offense!"

It's hard to disagree with the brunt of the article - rookie WRs are all over the place in terms of their production, and no wise GM would expect any one receiver to instantly add value to the team. I'll grant the idea that elite wide receivers are nothing more than "shiny hood ornaments." Hood ornaments - literal or metaphorical - don't make cars or NFL offenses go faster or score more points. What they are there for, however, is to make everyone else think they do.

Put directly, while an elite receiver won't suddenly make an offense statistically better on his own, he will draw the attention of opposing defenders and game planners. It is nearly impossible to measure this effect statistically - after all, how can you control all other variables and isolate the effects of any single player on the overall production of an offense? - but on the level of a single play, it is easy to see defenders get distracted by the "shiny" WR and end up giving up a play elsewhere on the field.

Berne trashes the notion that a top-flight WR doesn't "open up the middle of the field" for an offense, but that's pretty much exactly what Brandon Marshall did over and over again in the Bears' Week 7 matchup against Detroit last season. The Lions were forced to field a group of scrub players due to injury, making them a defense ripe for exploitation. Here's one example of this kind of exploitation a moment after the snap: 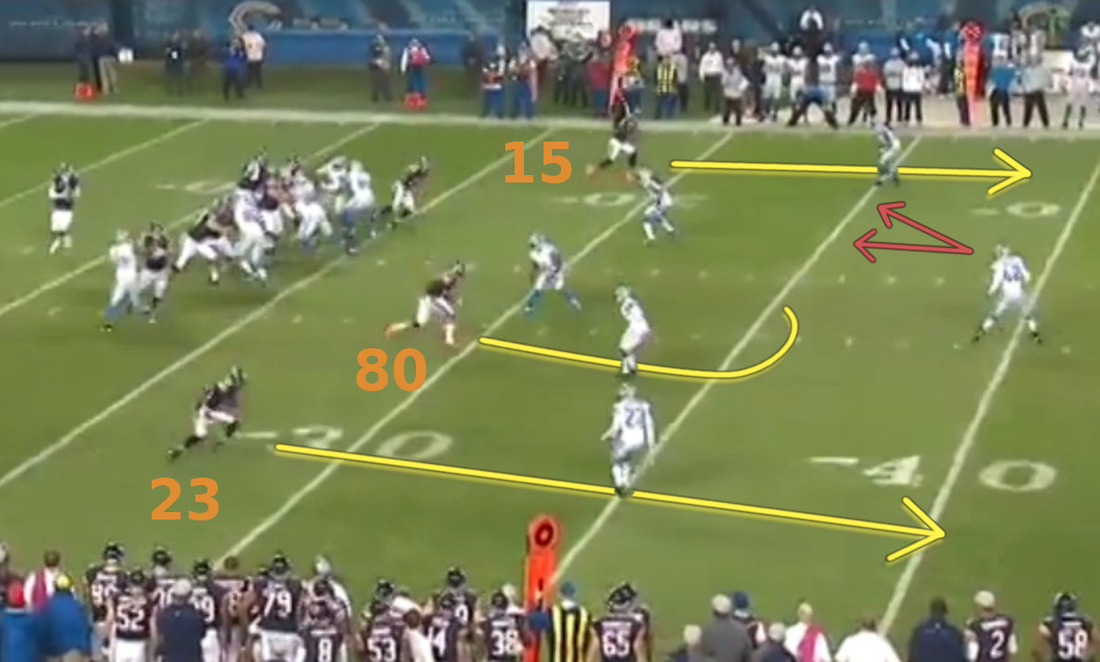 The Lions put a man on each receiver, but left the free safety - Amari Spievey - over the top of the play to patrol the area around the sticks on this third and ten play. The safety has three wideouts to devote his attentions to, but where do his eyes (sight lines are shown in red above) naturally tend to? Marshall, of course. With one eye on Cutler and the other on #15, it's all too easy for Earl Bennett (#80) to get open in the soft spot right where the safety could have been:

Doing what he does best, Bennett secures the catch and moves the sticks. Score one for the hood ornament!

This effect can be equally as strong in the run game. Perhaps it was just my observational bias, but at least in this one game, Matt Forte made a healthy percentage of his runs to the side of the field opposite that of Marshall. Why would that matter? Take a look at this next one, a 39-yard gallop by the Bears RB:

Right before the snap, the Lions rotated from having two high safeties to the single-high look they show here. Even with the Lions correctly rotating a safety in the eventual direction of the Forte run, it's that one high safety who ends up making the play. It's where Spievey makes the play that is of interest here, though. Watch as the play evolves: 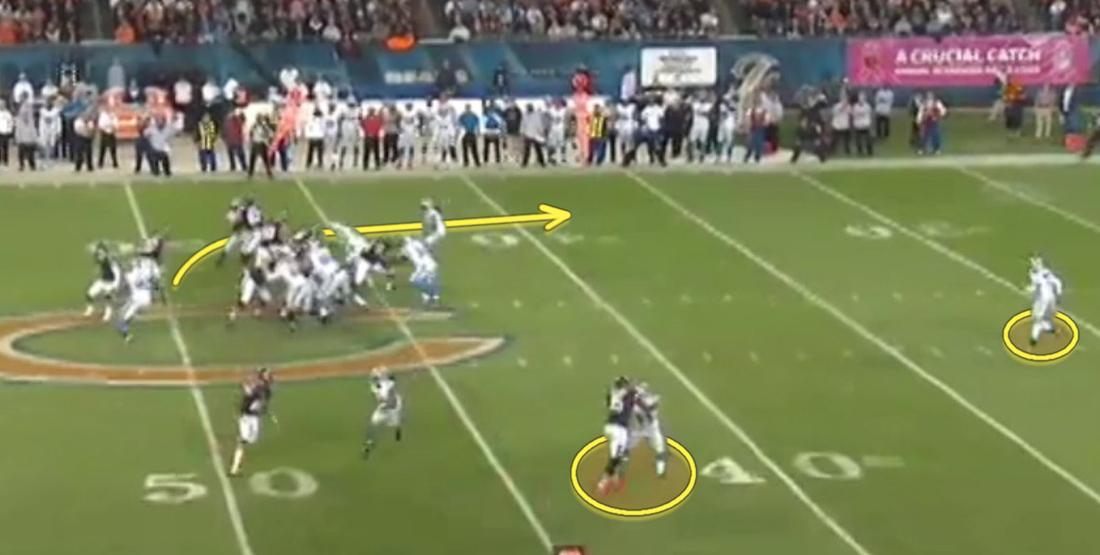 Only after the the handoff has been made above does Spievey finally angle over towards the left sideline - Marshall is simply too big of a threat on play-action for him to just read the run and react by heading downhill. This doesn't break the defense wide open, to be sure, but it does end with Forte getting a few more yards then he might have otherwise: 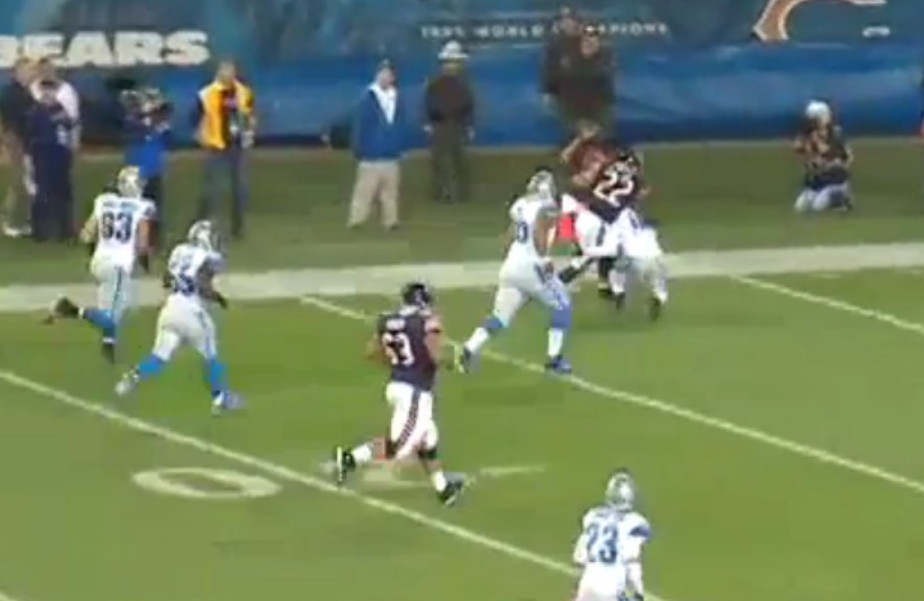 Spievey catches up with Forte at around the ten yard line, and while Forte misses pay dirt here, shiny distraction Brandon Marshall is able to convert the drive into six points a few plays later. Score another one for the hood ornament.

Ultimately, Kerry Berne is right that a single wide receiver doesn't make or break an NFL offense. It's hard to argue, however, that having a Brandon Marshall-level receiver doesn't help. Yes, Marshall didn't get Cutler over the 4,000 yard hump or get the Bears into the playoffs, but for at least one game, his ability to draw coverages to him helped the rest of the offense produce more than they might have otherwise. You think a safety is going to care if it's Devin Aromashodu running routes across from the action? Not nearly as likely as it is with Marshall.

So while fans and GMs might overstate the importance of their team having a "big name" out wide, everyone on an opposing defense does the same thing. The Bears were lucky to get Marshall at somewhat of a bargain thanks to his off-the-field issues at his last stop in Miami, and hopefully Marshall continues to live up to the hype next season. He might not be a world-beater or even a safety-beater, but he can at least be a safety-distractor.

Read more from WCG on the Bears receivers: