Would Marc Trestman help out in a Zombie Apocalypse?

Share All sharing options for: Would Marc Trestman help out in a Zombie Apocalypse?

OK, I realize this is one of the odder articles ever on Windy City Gridiron, but it's the off season, so what the Hell.

NFL.com has tapped into the Zombie craze by listing out their top 10 NFL personalities that would survive a "World War Z" type Apocalypse. They included one member of the Chicago Bears, but it wasn't any of the usual suspects, it was Head Coach Marc Trestman. When I think of a bad-ass apocalyptic survivor, I don't picture a little mousy fella like Trestman. Here's their reasoning for picking the Bears head coach.

The zombie outbreak will spread like wildfire across the United States, but Trestman has an escape plan. Knowing full well Canada will close their borders to stop infestation, he'll use his Canadian cache ("You know, I did win back-to-back Grey Cups") and leftover Montreal identification to get safely back to the Great White North. He'll try to bring Jay Cutler with him, but the zombies will pick him off easily.

I suppose that makes sense, and looky looky, they even took a shot at Jay Cutler because of course they did. 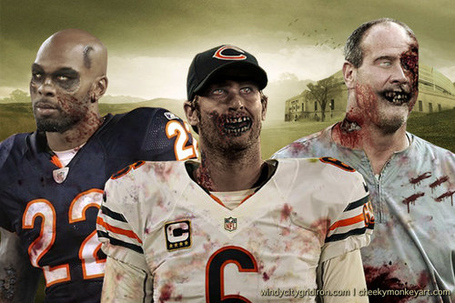 I'm not sold on partnering up with Trestman for my Walking Dead survival team. If I was picking my ultimate group of Chicago Bear survivalists for a zombie outbreak, I would go for more strength and speed.

You could armor up Peppers, hand him a couple of machetes, and send him into a horde of the walking dead to hack and slash up their brains. Peanut would need nothing more than a pair of lead lined gloves to cave in undead heads with a well placed punch. Devin Hester would serve as the "Glenn" of the group, dodging and weaving his way through the mass of living corpses. Rookie Long would bring a little attitude and eagerness to the team. And Adams would bring along some much needed levity to a grim situation. Adams would also provide a heck of a meal if he were to get snatched up by a zombie.

Who are your top Bears that you would want on your side if the Zombie Apocalypse went down?

Football Will Still Exist in 20 Years