After nine strong seasons with the Bears and numerous position shifts, Israel Idonije finally left the Bears this Monday. While the Bears will certainly miss his high character and unstoppable motor, the team looks ready to replace his on-the-field production from last season with a crop of up-and-coming defensive linesmen.

Share All sharing options for: Bears Playbook - How Replaceable is Israel Idonije?

Few Bears players in recent history better exemplified the lunchpail-carrying, Grabowski spirit of the Bears better than Israel Idonije. One of the few Canadian players to sneak their way into the NFL, Idonije stole a roster spot in his rookie season thanks to his strong special-teams play. From there, he was bounced around the defensive line, something playing at tackle, other seasons at end. He could seemingly add or remove twenty pounds of body weight on the whim of Lovie Smith to make these shifts, and never once did he complain or attempt to work his way out of town.

His patience paid off in 2010. While it was his seventh season as a Bear, it was his first season as a starter, and he rewarded the team for the promotion by generating 20.5 sacks over his three seasons as a starter. Idonije could generate a pass rush from the end as well as the middle of the defensive line, but after reviewing each of his 7.5 sacks from last year, I can understand why the Bears let him walk. While there is no way to replace someone of his high character on the roster, the Bears have too much depth on their defensive line to invest their limited remaining cap space in Idonije.

Let's take a look at a couple of Idonije's sacks, and you'll see what I mean. This one, which came at home against the Lions, features an impressive push by Izzy from the 3-technique DT position. He takes on two blockers right up the middle: 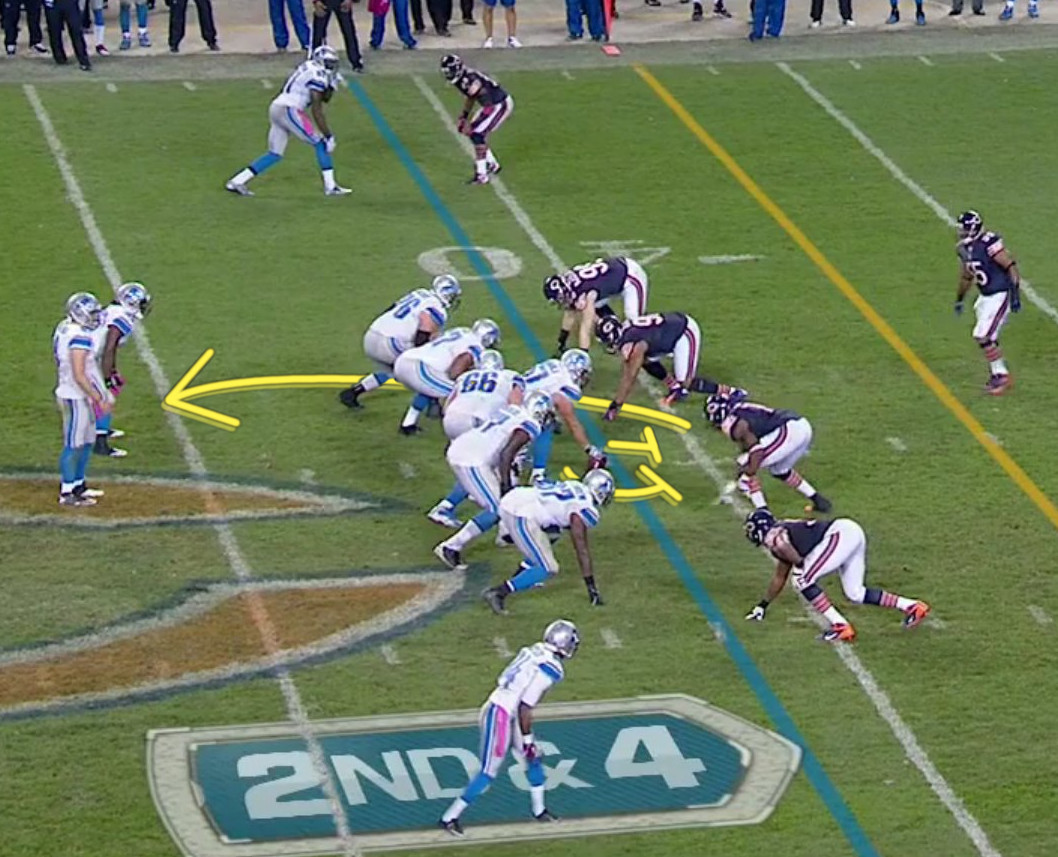 And then he wins: 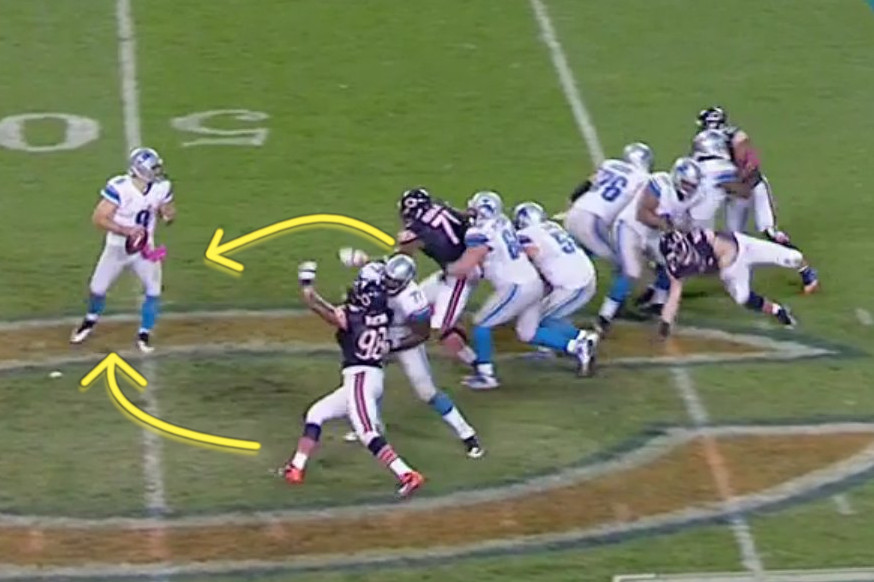 While Idonije successfully took on two blockers and made his way through, look at who else is on his way to Stafford - Corey Wootton. The vet and the third-year man converge on top of Stafford, but #71 gets credit for the full sack. 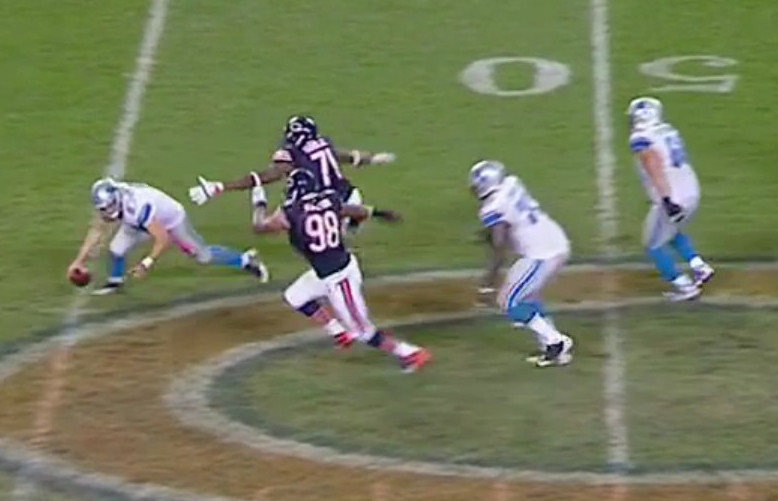 This seemed to be the story for many of Idonije's sacks. The quarterback held the ball a second too long, and both Idonije and someone arrived to clean up the QB's mess for him. The same thing happened against Minnesota, where both Idonije and rookie Shea McClellin got to poor Christian Ponder, who had nobody open and was forced to step up into the pocket. Bad idea, Christian.

This one came late in the San Francisco game, and again features the duo of Idonije and Wootton combining for the sack from the DT and DE positions. Izzy is highlighted below. The coverage holds up, the QB holds the ball, and the play ends with Bears defenders holding the QB: 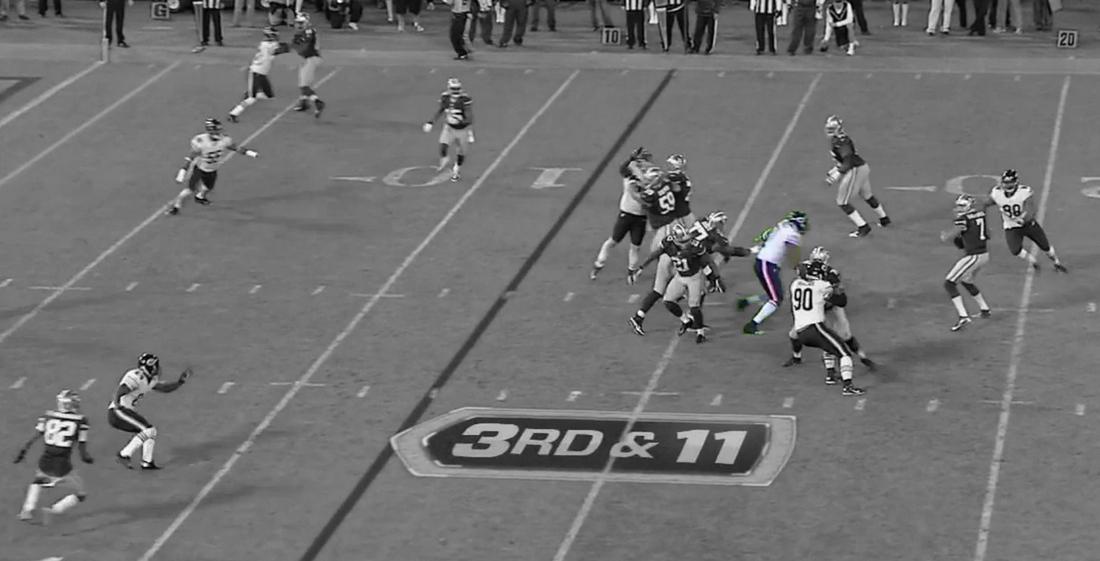 Again, you have to respect Idonije for his ability to beat double-teams, but you would hope that another Bear could step up and occupy two interior linesmen to set up the DEs on plays like this. And on at least one occasion, Idonije was gifted a sack from the other team. In the game against the Rams, Sam Bradford simply fell down on one play, meaning all Izzy had to do was fall down on top of him to notch the sack: 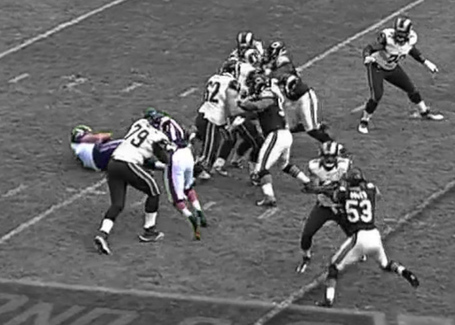 I would never sell Israel Idonije short - he is the ultimate example of the "coachable player," one who survived multiple position switches without falling victim to Danieal Manning Syndrome. Still, for the price he was demanding, the Bears probably would have been forced to make cuts elsewhere to keep him around. While his ability to play both DT and DE made him a valuable cog in the defensive line rotation, there is too much talent below him to justify paying him the money he wanted - the Bears had a contract on the table for quite a while that he never signed.

Still, I'm sure I'm not the only Bears fan who wishes him all the best, at least for 14 of his games.

Fan Post - So, some hypotheses to test... (Or The Official Discuss Jay Cutler Thread)

Who is the Face of every franchise in the NFL?

Fan Post - Is there anyway the Bears could bring Brian Urlacher back to the team as an Ambassador?