Last night, WCG had the chance to catch up with Charles TIllman at his second annual Pro BOWLer fundraiser for his Cornerstone Foundation. Get the word on how the off-season is going and who Tillman would put on his Mount Rushmores, and get some Bears insight from lunchpail-carrying long snapper Patrick Mannelly.

Charles Tillman was named a Father of the Year with good reason: after his second daughter Tiana survived a harrowing heart ailment, he established the Cornerstone Foundation to help other children and their families navigate the trials of such life-threatening diseases. Last night, Tillman joined with Kings of Rosemont and a bevy of current and former Chicago Bears to host the second annual Pro BOWLer fundraiser and raise funds for this worthy cause. 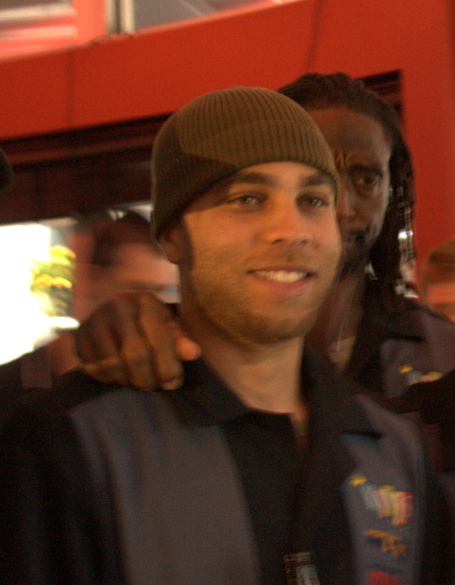 Like many a DB, TIllman keeps a hand on WR Johnny Knox so he can't run off

Tillman started out by praising Kings, the hosts of the event, and Meijer, the major sponsor for the night. As for the other half of the equation - the players who volunteered their time - Tillman said that their willingness to help out "really says a lot about the guys. It isn't about me, it's about us as Chicago Bears. We are football players, but we are always willing to support our teammates when they have events like this." 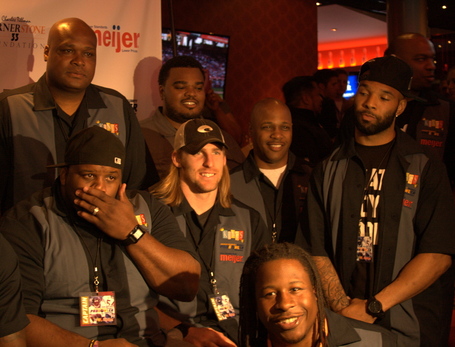 Forte is wondering what AA is up to, with the "other" Adrian Peterson and Dane Noble crush Craig Steltz in the foreground

As to the work his foundation has done, Tillman "isn't one to brag" about it, but elaborated by stating that, "we've done a lot of good things. The people that we're helping with the money we've raised... I'm grateful for all the money and help we've gotten. Without the fans, without the people here right now, without my teammates - my family couldn't do this without [their] support." 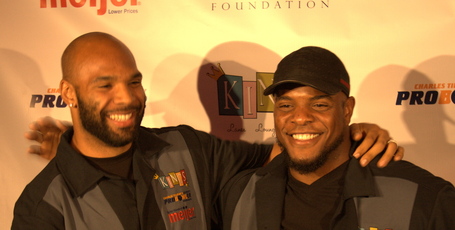 The topic naturally drifted towards football, and Tillman said that the OTAs are going "good. Guys are starting to fill out the new system." More generally, "guys are getting used to Coach Trestman and how he goes about running the team."

Asked about the gaping hole left by the departure of Brian Urlacher, Tillman responded that, "He was a great guy to play with, and he will be missed." Tillman hasn't changed his leadership role on defense, though, stating, "I'm one of those guys that will lead, but by example. I'm not the vocal guy." Does Tillman think Urlacher is a Hall of Famer? Not mincing words, Tillman said, "Hell yeah. Duh. Easy one. First ballot."

Everyone's thinking about Mount Rushmores this off-season, and Tillman had the chance to put together a few of his own. First, he listed off the top four that he has played with in his ten seasons with the Bears, starting with Mike Brown - "a hell of a safety" - and then rounding out the list with Brian Urlacher, Lance Briggs, and Julius Peppers. And as to that last man on the list, Tillman thinks that he's "still on the rise."

As for Tillman's top four of all time, he wisely listed Walter Payton at #1, then "had to give it to" Eric Dickerson and Ray Lewis at the #2 and #3 spots. He wavered on his final choice, first giving it to Jerry Rice but then switching it to Barry Sanders, simply because he's "a big Barry fan."

Back to the event at hand, Tillman talked about how the Bears players on site bring their competitive natures out onto the lanes. "There is some trash talking, but it's all friendly... We're athletes by nature, we're competitive by nature. We're going to compete for everything: who can give the best interview, who can roll the ball the fastest... you're going to bet about something." He did want to make sure that all player side bets get donated back to the charity, however.

Numerous other Bears players were on hand, including a very tastefully dressed Shea McClellin. Many fans were down on him last season for simply not looking the part of a 4-3 DE, but having met him both last year and last night, I noticed that he's definitely put on some extra muscle this off-season. 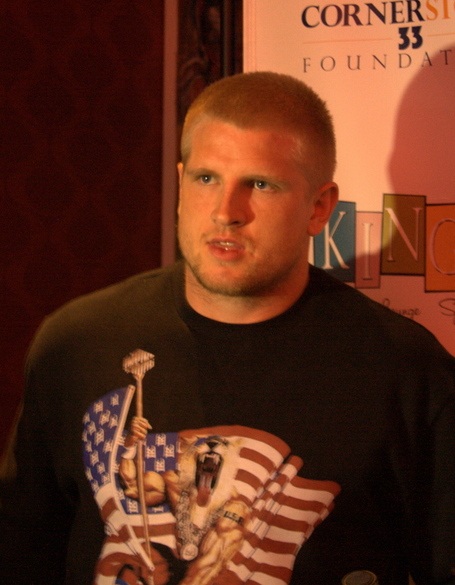 Since WCG is currently celebrating some of the great, often uncelebrated Bears players with our Mt. Lunchpail series, it seemed only appropriate to chat up a true Grabowski of a player, long snapper Patrick Mannelly. 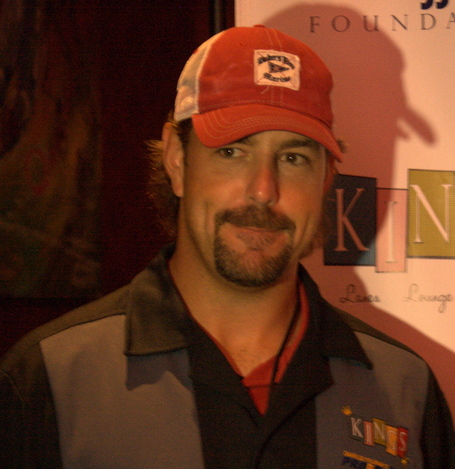 Out of the many new faces on the playing side of the team, Mannelly has been most impressed with TE Martellus Bennett. "His athletic skill set is unbelievable." He thought for a moment, checking through the list of the many tight ends he's seen in blue and orange over the years, and then chimed in that he's the best the Bears have had in his time with the team. Between his work in the weight room and his work on the field, Mannelly's assessment was straightforward enough: "Impressive."

How many more years does Mannelly have in the tank? He isn't willing to put a number on it, but a passing-by Charles Tillman suggested 35 more as a start. Mannelly could only respond to Tillman that he'll be around at least as long as Peanut is, so let's hope that means many more years for both the long snapper and the cornerback.

After the parade of players made their way onto the lanes to join their teams, Tillman was joined by radio personality Matt Abbatacola to raise money for a cause near and dear to the hosts, Kings Lanes. As Abbatacola explained, the Boston-based Kings had one of its employees killed in the Boston Marathon bombings and another injured. Tillman donated two signed jerseys for auction to raise money to support the victims of that attack. Tillman modeled one of the two jerseys for the crowd, and the other jersey, well, maybe it should have been an extra-extra-large: 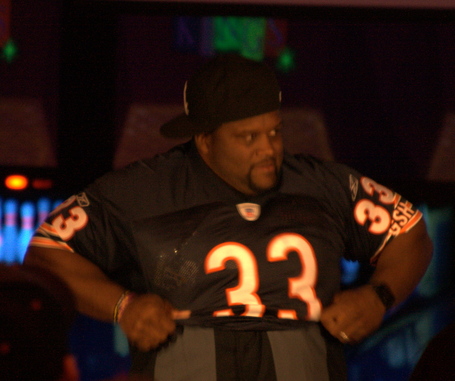 That's what all that White Castle will do to you!

Thanks to two generous bidders, Tillman was able to bring in over $2000 with the two jerseys, adding to the over $100,000 the event raised for his foundation. Many thanks go to Kings Lanes and Meijer for their generous support of Tillman's off-the-field work. If you want to join with Charles and help support the Cornerstone Foundation, I highly encourage you to go to his website to find out the many ways you can contribute.

Best Of The FanPosts Section