Looking for a good read this off season to keep the NFL juices flowing? Looking for the perfect book to share your passion for the NFL with your kids? Sports Illustrated For Kids has got the perfect book for you, and the Chicago Bears are well represented.

Share All sharing options for: Book Review: "Sports Illustrated For Kids Big Book Of Who: Football" 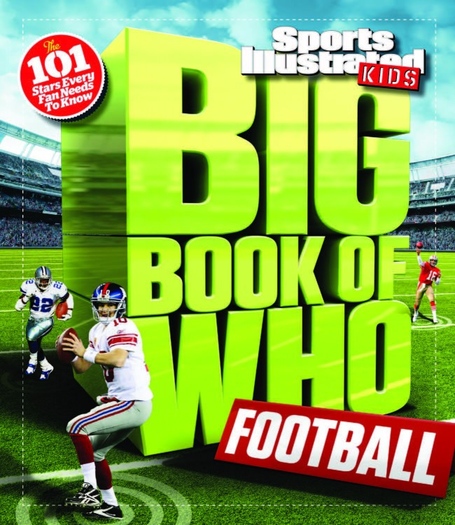 About a month ago I was contacted with an opportunity to receive the latest book from Time Warner Entertainment and Sports Illustrated For Kids, The Big Book Of Who: Football. The press release I received described the book as follows:

Featuring gridiron greats like Dan Marino and Emmitt Smith, as well as current players such as Tom Brady, Cam Newton and Ray Lewis, The Big Book of Who: Football highlights football's greatest:

· Champions: The players who achieved football's ultimate prize, many of them more than once.

· Personalities: Men who are known for more than just the way they play the game on the field.

· Record Breakers: Players whose feats set the standards by which future accomplishments are measured.

· Super Scorers: Their specialty is putting the ball either through the uprights, or into the end zone.

· Yardage Kings: The players who have excelled at moving their teams up and down the field.

As a huge NFL fan, I'll have to say the book intrigued me, but as a writer for Windy City Gridiron I had to ask about a Chicago Bears angle. Once I was assured the Bears were well represented in the book, I asked for an advanced copy.

The book is phenomenal.

It's obviously a kids book, SI For kids is aimed at kids eight and older, but the book is so chock full of NFL facts it was a serious page turner. Some of the tidbits I was already aware of - I have been watching the NFL for over 30 years, and have been writing about it since 2006 - but many of the facts were new to me.

Did you know that Walter Payton holds the record for most TD passes by a non QB, with eight?

OK, so Marshall broke his record while a member of the Denver Broncos, but he's a Bear now. Do you know the record that Kyle Orton helped him set?

Did you know that William Perry's Super Bowl ring was the largest ever made, size 25?

My 6 year old daughter likes looking at the pictures, so I've taken the opportunity to teach her some of the basics about football. The team in navy and orange with the C on their helmet are the good guys.

The blue and silver team, the Lions, are the bad guys. As are those purple looking weirdos.

The yuckiest team of all are those green and yellow guys with the G on their helmet. And you couldn't have pried the smile off my face when we came across a picture of the golden locked Thor looking Clay Matthews. My daughters immediate response, "Oh look a girl!"

After I finished laughing, I explained to her he's not a girl...

But did you know that Clay Mathews isn't the first third generation NFL player? The Matthews clan is actually the 3rd family to have three generations in the NFL. The first occurred when Matt Suhey laced them up for the Bears. His father, Steve, played for the Pittsburgh Steelers, and his maternal grandfather, Bob Higgins, played for the Canton Bulldogs.

I learned that from the book.