In a league that likes to tout it's "any given Sunday" possibility and promise, it stands to reason that we should see a lot of parity when it comes to the playoffs. But is that really the case? 25% of playoff spots in the last six years have been dominated by two teams--that doesn't leave a whole lot for everybody else. The key for repeated appearances seems to be consistency.

Quick Trivia Question: Which is the only NFC team in the last six years to not make the playoffs?

Why six years? Well, it's simple. In a reasonably even world, six years is the first period of time when each team in the conference would be able to make the playoffs two times. (There's sixteen teams in the conference. 16x2=32. With six playoff spots available in each year, 6x6=36, which means some people would finally get to appear for a third time in year 6.)

That's not how life works, though, and everybody doesn't always get equal portions of the pie. In fact some teams get a whole lot more.

And in answer to the trivia question, sometimes the St. Louis Rams get none.

Appearances can be deceiving. Except when they're pretty clear-cut, like these: 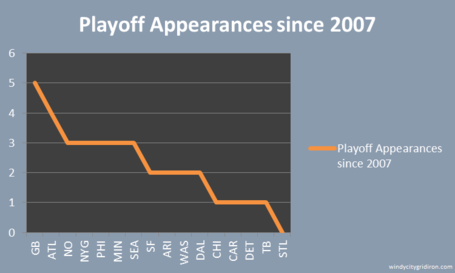 As you can see, the Packers and Falcons have combined to take up 25% of the thirty-six available playoff spots in the last six years. Five more teams have had three spots each, so if you total that up, less than half of the conference has taken up 75% of the playoff spots. So where's the parity?

Parity only means so much, when there is something that is much more indicative--consistency. It shows in the appearances - consistency in your coaching staff, and consistency of solid quarterback play means everything in the recent NFC. Let's take a look at some of those teams: 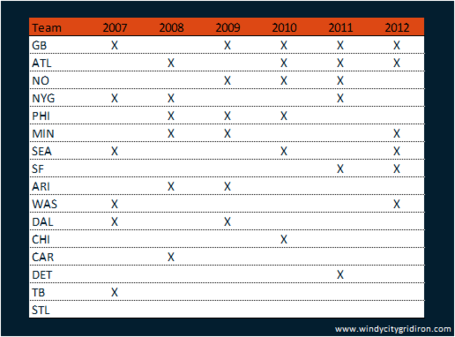 Green Bay Packers - The Pack have made it to the playoffs five of the last six years, and they won a Super Bowl in 2010. They have been coached by Mike McCarthy since 2006. In 2008 he was able to weather the Brett Favre storm to get his young guy in at quarterback. That guy just happens to be Aaron Rodgers.

Atlanta Falcons - The Falcons picked up head coach Mike Smith in 2008, as well as starting QB Matt Ryan. This system has worked very well, putting them in the playoffs every year but one. Fun fact: every playoff loss they have suffered has been to a team that went to the Super Bowl, including 2 Super Bowl winners.

The next subset, the three-timers: Of the set of teams with three appearances, you'll notice what is possibly the most favorable thing for the Bears short-term playoff hopes. Several of the teams have had a long, consistence performance from their coaches and/or quarterbacks (See NYG, New Orleans, to a lesser extent, Philly.) The others are a bit more of an upstart, with more recent head coaches or young quarterbacks. And that is where the Bears hopes lie.

The Chicago Bears are in an interesting transition period--new coach, newer GM, and a lot of chance for a total overhaul if things don't go right this year.

There's no guarantees they'll be able to ride the defense to 9+ wins like they've done so often in the past. They'll need to get out and sock some teams in the mouth early, and that's going to be on Trestman's ability to design, and Cutler and others ability to execute. We get our first taste of training camp in just a few days. We'll see how it looks then.

If you can't beat 'em, join 'em. Trestman's going to need a quick adjustment curve, because his NFC cohorts aren't backing down any time soon.