This is the longest stretch of non-football activity. The draft is long gone, free agency is nearly a memory, and nobody is doing anything, except, well, all those guys getting arrested. That said, here's a few reasons that Bourbonnais can't come soon enough.

July 25th. That's the day that training camp will begin for the Chicago Bears in Bourbonnais. (And many other teams begin right around this time, too)

Unfortunately, today is July 2nd, and for most fans, that will seem like a lifetime. What will we actually get from training camp? The same platitudes we always get.

"The offense is starting to click." "Yeah, he looks great out there." "Player X is in the best shape he's ever been coming into camp."

But at least, for fans, it's some sort of tangible evidence that the players are actually doing something.

That said, the offseason will never feel longer than it does right now, and here's three reasons why.

This one isn't even really funny, it's just true. 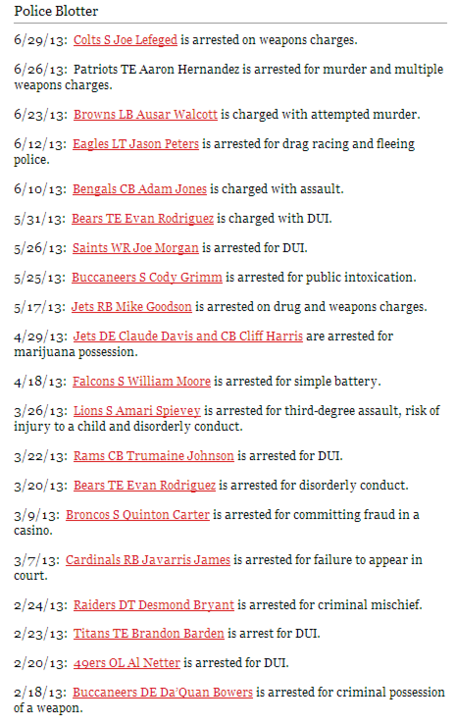 That's a snapshot of Pro Football Talk's police blotter, just since the Super Bowl. If you ask Yahoo!, the list is even worse.

Not to make light of the victims of some of these terrible circumstances, but what is it lately? This article from SoCal Public Radio has the thoughts of Mitch Abrams, sports psychologist and chair of the (brace yourself here) Anger and Violence in Sport committee of the Association for Applied Sports Psychology. (phew)

Mr Abrams suggests that conditioning plays a large part, in that football players are celebrated for behavior on a field, and vilified for it just outside the stadium. He has a point. Football players aren't, at a higher proportion, necessarily more likely to commit violent crime. They are, however, much more high profile than you or I may be.

His two suggestions? Pre-screening, and, shocker, teams should hire sports psychologists. What's another great way to have players get arrested less? Give them something to do, and get them back to work.

Ok, I said I wasn't looking to make fun. However, getting arrested for casino cheating is pretty damn funny, Quinton Carter.

It wasn't even TMZ or some such. This is an actual story from CSN Chicago, who spend their time being a pretty darn good local coverage team, most times. This is not one of those times:

Check out photos of Cutler and Cavallari's honeymoon in Italy. http://t.co/NTsayYI8tv #Bears

But...just...wh...why? Why are we discussing this? Oh, that's right, because there is nothing happening. At all.

I get it. Cavallari made her way by, well, people talking about her doing things that aren't all that terribly original or important. I think Jay Cutler is at a point where if you write his name, you're pretty much guaranteed to get an even split of people who like him, and people who think he's the worst thing that's ever happened to blue and orange. (The good blue and orange. Not the Denver blue and orange.)

I know, though, that I'd much rather hear someone telling me how he looks as comfortable as ever in the pocket, while he doesn't ahve to worry about getting murdered at Olivet Nazarene.

3. We need to see some sense of this offense.

At this point, no matter how good we are at talking about it, or looking at old tape, or saying "Trestman" over and over, we have to see some of what will be on the field.

Now, granted, training camp isn't really the best place to see that, but we will be able to see some things. How has Cutler's footwork and approach changed? Is he using the rifle to get those short passes out? Do the receivers look fit? Are the routes they're running crisp and effective?

Do the linemen understand what they're doing and how to work together? How are their hands and footwork? This offense has a lot of questions to ask in a short amount of time. If the team is going to be successful this year, it's up to them.

How Much Stock Do You Put in Character Concerns?