With the Bears giving up a touchdown to start the third quarter, the Bears offense needed a quick response to keep the game within reach. Here's how Jay Cutler and Marc Trestman drew it up and scored on the game's most critical drive.

Share All sharing options for: Chicago Bears Playbook - Anatomy of a Touchdown Drive

The first half of the game, and it seemed like it would be Martz and Tice all over again: Jay Cutler was wasting time outs, and despite having great field position, the O came away with only ten points. After half time, it looked like a whole different team coming out of the blocks. Cutler was making plays with his arm and his feet, spreading the ball, and scoring touchdowns.

Let's look at that first TD drive of the second half, which in my mind was the most critical drive of the game. With the Bears down 21-10, Trestman knew the only way to beat the stingy Bengals front seven was to keep them off balance. Run at them one play, then give them the same look and pass out of it. Stare down the receiver on one half, then turn and throw the other way.

The Bears didn't quite get off the bus running in the first half, but they looked prepared to do so with their first possesion of the second half. The run look, which featured both a run-fake behind Kyle Long and a fake end-around, got every single Bengal out of position and opened up the entire left third of the field for Alshon Jeffery.

With the Bengals defense all flowing to the right at the snap, it was only natural that Cutler would end up throwing left. Brandon Marshall, as always, attracted a crowd of defensive backs on his go route down the right seam, but the key parts of this sales job were the run-fake executed by Matt Forte and FB Tony Fiammetta, and the end-around fake run by Jeffery. The run-fake keeps half of the linebackers home. The edge defenders to Cutler's left, seeing the end-around fake, correctly guess that Jeffery wasn't going to get handed the ball, but they didn't suspect he would then get the pass. They followed Cutler's eyes as he stared down Marshall, leaving Jeffery wide open: 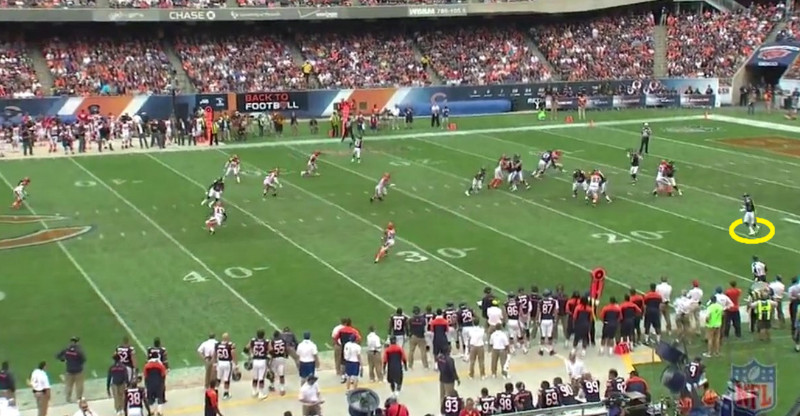 Seeing Marshall in quadruple-coverage, Cutler quickly turned and threw to his safety valve. Jeffery sauntered up the sideline after making an easy catch, and he picked up a quick twelve yards to jump start the drive. Also, notice the textbook pocket around Jay Cutler. Great play call, and great execution.

After that nice completion for a first down, it was time to go with a real run. A simple enough inside zone run, but watch the solid effort of Kyle Long at right guard as compared to the less-than-stellar work by Tony Fiammetta.

Long makes a solid block on Geno Atkins, pushing him away from the point of attack and out of the play. Fiammetta gets to the middle linebacker at just the right time to blow the middle of the defense wide open for Matt Forte, but needed to either push his man towards the left of the screen or straight down the field - bouncing off of him didn't do much at all. The Bengals linebacker is able to easily shed the block and get Forte in his grasp. Forte does take the a couple of Bengals for a ride down the field after that, but this could have easily been a bigger play if the new fullback secures his block.

Still, the very real threat of the run kept the Bengals defense more honest than it would have been. Even after Cutler made the big third-down conversion to Martellus Bennett against an all-out blitz, the Bengals were always careful to keep a linebacker on Forte. It was this worry - a worry magnified when Forte hit a six yard run on the first down after the big pass to his TE - that enabled this next play, a nice pass to Earl Bennett.

With one linebacker manned up on Forte, only the Bengals linebacker pointed out in red was there to cover the short zone. Jay doesn't even have to bother to look off the rest of the Bengals coverage, since decoy Brandon Marshall drew enough attention to himself without Cutler having to add to Marshall's shine. Jay hit Bennett in stride, moving the sticks yet again.

One nifty curl pattern by Alshon Jeffery later - a perfectly drawn up Cover 2 beater caught in front of the safety - and the Bears had the ball on the five. From there, it was time to pound the ball into the end zone. After getting four of the five yards he needed on the first run, Forte was called on a second time to finish the job. Here, the blocking on both guards - both Kyle Long and free-agency aquisition Matt Slauson - came into focus.

At the snap, Kyle Long quickly steps left to help Roberto Garza block the nose tackle. Atkins, who starts the play to Long's right, loses his balance trying to get a hold of the side-stepping Long. By the time Slauson arrives to seal the right edge of the run game, all he has to do is belly flop on top of the Pro Bowl DT to break Forte for the final yard.

The Bears were still behind, but they showed the type of second-half improvement so rarely seen under the Lovie Smith regime(s). With Lovie only having 16 wins after being down through one half, it was refreshing to have Trestman notch his first come-from-behind win in his first game. Let's hope we see more of this second-half offense in the first half against the Vikings, and the Bears won't need to come from behind to take an early lead in the NFC North.