Chicago Bears Sackwatch 2013: Week 1 vs. Cincinnati Bengals - The blitz pick up that won the game

What am I supposed to do for my Sackwatch when the Chicago Bears didn't allow a sack? I'll take a look at the game winning touchdown pass from Cutler to Marshall, that was aided by a blitz pick up by the Bears offensive line.

Share All sharing options for: Chicago Bears Sackwatch 2013: Week 1 vs. Cincinnati Bengals - The blitz pick up that won the game

I could get used to this.

The Chicago Bears didn't allow a single sack against the stellar defense of the Cincinnati Bengals on Sunday. If you are new to Windy City Gridiron this season, or are unaware of what the Sackwatch is all about, I started breaking down the sacks that the Bears allowed when the Chicago offense was run by Mike Martz.

You do remember the Martzfense don't you?

Seven step drops, leaving tight ends one-on-one with edge rushing quarterback hunters, and an absolute stubbornness to alter his Greatest Show On Turf offense to his personnel in Chicago. His teams have notoriously given up a bunch of sacks, and his time in Chicago was no different. In 2010 the Bears gave up 56 sacks, in 2011 it was down to 49, then in 2012 Mike Tice took over. He promised to get the ball out quicker, and to revamp the protection schemes, and the sack total only dropped to 45. Jay Cutler took a beating, week after week, after week, after week.

With head coach Marc Trestman and offensive coordinator Aaron Kromer implementing their West Coast Offense, we expect things to improve. So how does the Sackwatch look after week one?

Can I get a drum roll please...

If this keeps up, I may need to hit up David Taylor for a new logo...

With nary a sack to detail, I thought this would be a good time to point out a job well done by the offensive line, and what better play than the game winning touchdown pass from Jay Cutler to Brandon Marshall. The play featured a blitz pickup from new left tackle Jermon Bushrod, and a heads-up assignment switch from left guard Matt Slauson.

In this first picture you can see the Bears come out in an offset I, strong right formation, with twins (2WRs) to the left. Brandon Marshall is the slot receiver with Alshon Jeffery split wide. The Bengals remain in their base 4-3 defense, and they keep their right cornerback on the right side to cover Chicago tight end Martellus Bennett. Cincy keeps their left CB out on Jeffery and they walk up the safety to cover Marshall. I really like the odds of Marshall being covered by a safety. 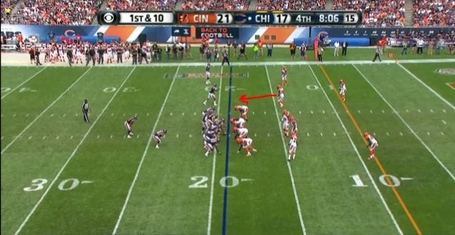 The red arrow above is showing that Cincinnati outside linebacker James Harrison (64 career sacks) began the play off the line, then showed blitz a split second before the ball is snapped, as seen in the picture below. With Harrison up on the line threatening to blitz, the Bears left side of the offensive line, Bushrod and Slauson, need to adjust protection.

Before Harrison walked up, Bushrod would have blocked the defensive end in front of him, and Slauson would have checked his inside first, then helped where needed. Either by doubling with center Roberto Garza, checking for a delay blitz, or thwarting an inside move by the DE being blocked by Bushrod.

If Harrison would have bluffed, then dropped back into a zone, Bushrod would have kicked back to cover the blitz, then readjusted his protection by squeezing to the guard, and looking to help out.

The play that was called was a playaction fake to Matt Forte. After the snap, Forte checks middle for a leaking defender, then releases through the line and to the left flat. He is one of Cutler's check downs if everyone is covered. The fullback, Tony Fiammetta, is chipping the DE that is rushing against rookie right tackle Jordan Mills, then releasing on a short curl route. He's another check down option for Cutler. 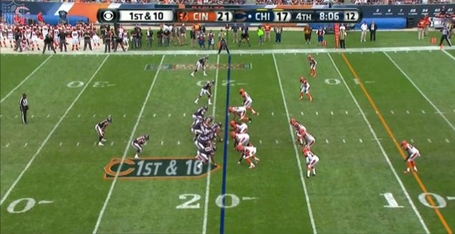 But since Harrison does indeed come on the blitz -- as pictured below the Bengals are rushing five -- Bushrod has to fan out to account for the edge rushing Harrison. With him fanning out, LG Slauson has to account for the DE, and Garza understands that he has no help to his left. The pass rush ends up being five on five, and the two Chicago running backs release to their pass patterns. 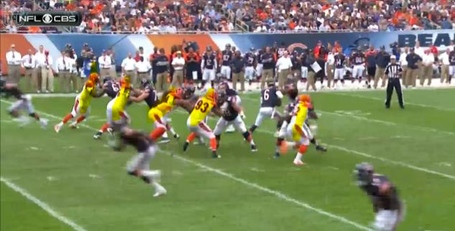 This exact same scenario played out on the 3rd play of the game, except over on the right side of the Bears line. Right guard Kyle Long missed a line call and he allowed the DE a clear path to his quarterback. We've discussed that play ad nauseum over on my grading the rookies thread.

The GIF below is the play in its entire glory.

I shouldn't be that surprised by the two veterans making the correct adjustment, but this offensive line does have four new faces on it. I don't expect every week to be smooth sailing, but for a one week performance, I thought the line looked in unison.