The Chicago offense wasn't able to remain sackless in week two, but this team is far ahead of the Sackwatch of the last three seasons. It would appear, so far at least, that progress is being made in the Bears pass protection. Now about that lone sack, where should the blame fall?

Last season the Chicago Bears allowed seven sacks to the Green Bay Packers on week two. Yes, seven. If you want to relive those you may click here.

This season the revamped pass protection from Chicago is continuing their stellar job of keeping Jay Cutler out of harm's way. While they didn't do as good a job as in week one, they still only allowed the one sack. Here's where we stand in the Sackwatch.

And here's the break down of that lone sack.

Sack 1 - Second Quarter 7:49 Jared Allen
The Chicago Bears were facing a 3rd and 9, and they came out in a shotgun formation, with Matt Forte beside Cutler, three wide outs, and a tight end. The Vikings actually only rushed three on the play, and they dropped defensive end Everson Griffen, who was lined up at DT, off the line to spy Cutler.

Minnesota defensive end Jared Allen's initial rush was to the outside of Bears left tackle Jermon Bushrod, and Bushrod stopped his advancement. Allen then dipped back inside to get free from Bushrod, and he again stayed with Allen. The two highlighted players in the below picture is Allen (69) rushing against Bushrod. Allen is trying to get back across Bushrod's face, and as you can see below, his body is still between Allen and his quarterback.

Something that is hard to see in that picture, is Bears running back Matt Forte. You can just see his leg poking out between the highlighted players. Forte's responsibility on this play was to check middle for a blitz, then leak out to the left to the flat. 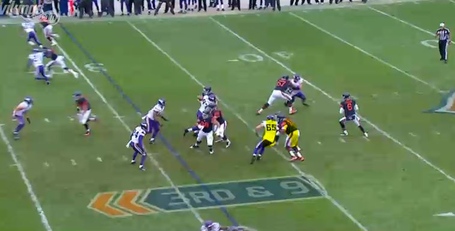 On this next picture, you can see Forte (highlighted) beginning to leak out, the problem is, he's leaking out directly between Allen and Bushrod. Forte inadvertently disengages his left tackle from his block, and Allen has a clear path to the now scrambling Cutler.

On the other side of the line, Chicago right tackle Jordan Mills did a good job in staying with his man, taking him all the way around the pocket. Cutler may have sensed that, which is why he darted to his right. Unfortunately Cutler's path led him directly into Allen's path. 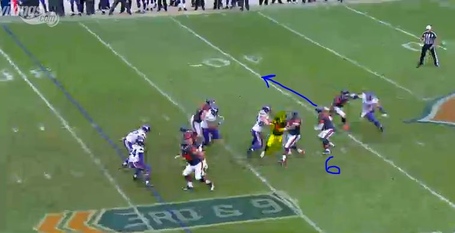 If you want to see the entire play you can click here.

I know Jermon Bushrod received the sack allowed stat from Pro Football Focus, but after watching that play, how do you put the blame entirely on his shoulders? Sometimes sacks just happen in the NFL, and that's where I place this sack.

If Forte doesn't release into the flat on that play does Allen get the sack? Forte probably wasn't even aware of the block taking place to his right. Had Forte realized what was going on a split second sooner, he could have chipped Allen on his left shoulder, and released behind him into the flat.

So after two weeks you have to be pretty impressed with the overall pass protection from the Chicago Bears...