We like to convince ourselves of things. We all know that the media hates the Bears or whatever. But what if I told you that the Steelers weren't double teaming Julius Peppers nearly as much you'd believe?

JULIUS PEPPERS IS SO GOOD HE GETS DOUBLE TEAMED ALL THE TIME.

That's the common narrative, right? That there are so many teams who are so incredibly scared of Julius Peppers that they simply drop a minimum of two guys on him at all times, just to negate him. After all, he's a big physical specimen, and that has indeed been the case in the past. But was it this most recent Sunday against the Steelers?

Here's some quotes from the community, sources redacted so as not to seem like we're targeting anyone:

Peppers is seeing the best O-lineman week in and week out. Plus the double teams, the chipping RBs, and the holding. Statistical anomalies such as this are always fun.

Peppers is getting held and double teamed a lot but it looks like he needs to go to Suh and Incognito school of hard play. Somebody needs to slap him around and get him mad or something.

Peppers had a good amount of pressure the whole game and the steelers were double teaming him the majority of the night.

But what if I told you they really weren't?

A little farther down, you can find a gallery of Pepper's play throughout the night. Some of them even have multiple shots to show a little bit different angles. You'll find Peppers circled in yellow. The problem is, a lot of those shots won't show two or three guys blocking Peppers. Some of them show no people blocking Peppers.

This doesn't take into account holding. Yes, Peppers gets held a lot. Here's a fun fact: ALL defensive linemen get held a lot. Holding happens on every play--a certain amount will always be allowed. Good effort is what gets the more egregious ones noticed, and Peppers hasn't been doing that like he used to.

And admitted, they will still game plan around it. Peppers has always been fairly decent at the run, and the Steelers left him unblocked several times because the run was to his opposite side, and he was never really part of the play. The argument isn't even whether he's still being effective-- he's still good at setting an edge, and he can still read the run like a beast. He isn't doing it while double-teamed, though.

For the most part, the only times he's engaged with multiple blockers are because the line either crashed (causing him to run straight over and engage linemen), or if a tight end gives a little push (not actually that common), or one time that he actively engaged the second lineman with an arm to preserve gap integrity. The plays that he is getting double-teamed on, are defensive plays that are exactly designed to put him in a position where he's double-teamed. (He often gets the enviable task of holding up a step and watching the line, as well.)

Let's take a look at a few shots on their own, but you can check the rest out in the gallery. 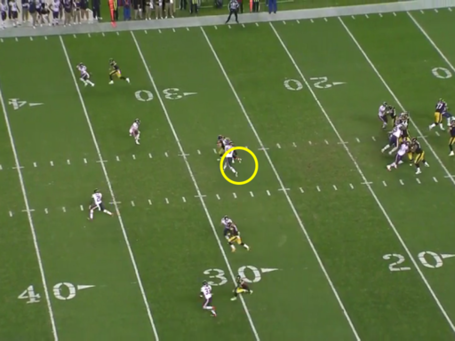 Straight up, I will give him a pass on this one. I wouldn't expect him to personally generate much pass rush from ten yards down field. 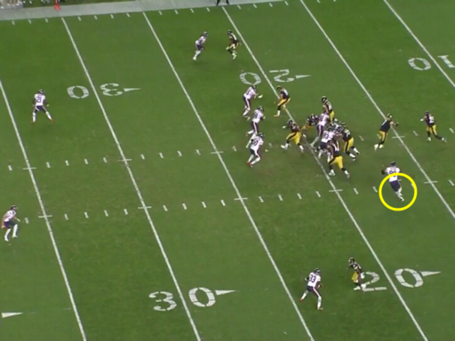 Here's an example of what I was talking about with game planning. The Steelers must have seen something in film suggesting to them that they can take the ball right and keep Peppers out of plays. There were two or three instances exactly like this, where the left tackle immediately crashes left with no concern for Peppers. 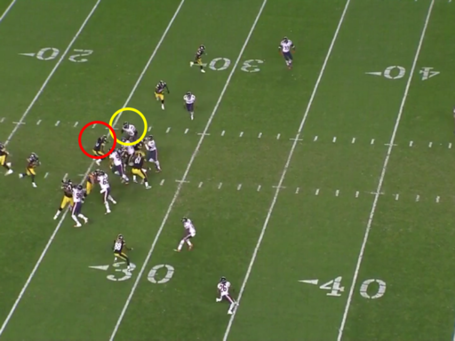 On this play, the gentlemen circled in red is the tight end. In this instance, he actually lined up on the right side and came across the line to take on Peppers, while their right side stood up Wootton and Melton.

Go take a look through the gallery, and then let us know what you think. Does this make you feel better or worse, especially with the knowledge that Melton (who was actually drawing a fair number of those double teams) is out? Keep in mind, this Steelers offensive line wasn't exactly praised, and they in fact pulled each of their tackles at various points in the night due to play. Will Chicago step it up against the Lions this week?