Chicago Bears Playbook - The Trestman Philosophy by the Numbers

Three games into the season, and Trestman's Bears have yet to get caught on the wrong side of the score board. Let's figure out just what Trestman means when he talks about the "precious football" and the "ebb and flow" of a football game.

Share All sharing options for: Chicago Bears Playbook - The Trestman Philosophy by the Numbers

This will not be an article about Lovie Smith, because this isn't Lovie's Bears. The offense? Humming. The defense? Blitzing! Marc Trestman and Jay Cutler were able to squeak out two close wins to start the season with well-schemed and well-executed touchdown drives, and we finally got a hint of Trestman's plan to hold a lead last Sunday in Pittsburgh. Put it all together, and we've gotten to see most of the common game situations a football team will find itself in.

Phil Emery, who hired a statistician in the off-season to "research... game situations in an effort to project future outcomes," found his match in Marc Trestman. At a fundamental level, Trestman has been playing by the numbers. Blitz more when you're ahead, go big only when you need to, and keep the offense on the field when it's fourth and goal on the one. If you think of these moves in terms of Win Percentage and Expected Points, both stats courtesy of Advanced NFL Statistics, these calls all are the "right" ones.

First, why blitz more when you're ahead? Simply put, the "reward" of a successful blitz are often times not worth the risk. This is doubly true when dealing with Ben Roethlisberger, who has historically been one of the best active quarterbacks when under pressure. In other words, if you're going to go after him, you better send enough troops to finish the job.

Look at this blitz from the first quarter, D.J. Williams' strip-sack that the Bears recovered inside the Pittsburgh 20. The Bears send six, and only struck home because the running back and pulling left guard both went to block James Anderson on his edge rush. With five blockers on Ben Roethlisberger's left working against only four Bears and two blockers taking on only one blitzer to his right, the QB gets squared up by D.J. and loses the ball.

A positive outcome on a blitz is highly favorable to one's odds of winning, as that Win Percentage chart from earlier showed - the Bears went from a 56% to a 73% chance of winning on this play, and didn't even have to score to do it.

While Trestman's Bears got aggressive once they put some points on the board, we have seen them stay more conservative on D when they aren't in the lead. The reason you don't want to blitz when you're behind? Just ask Dick LeBeau. In the fourth quarter, and with the game sliding from a 90%+ WP for the Bears into the mid-70s on the strength of Big Ben's big rally, the Steelers drew up a five-man rush to try and stymie yet another conservative Cutler drive. If you're going to blitz Cutler, however, you better double Brandon Marshall. Cutler sees Marshall with only a cornerback to beat, and the QB does what he'll always do in such situations: throw it up and hope for the best.

Cutler's pass here was one of the final nails in the coffin, as Marshall made another trademark athletic catch to notch a 41-yard gain that pushed the Bears WP back into the .90+ range.

A successful blitz can increase your odds of winning by around 15%, but as we see here, a blitz that fails to get home can cost you just as much. This is also the reason Trestman has gone on the record as saying the second-lowest-in-the-league three sacks given up by the Bears so far are still too many - sacks hurt your prospects for winning in a defined mathematical way. The Bears were content to take the short stuff and keep Cutler clean after racking up an early 24-3 lead, and Trestman didn't open things up again until the game got close.

This risk-reward proposition held just as true on a Bears blitz from earlier in the fourth quarter. Mel Tucker sends Lance Briggs as a fifth man to try and bring down Big Ben, but this leaves middle linebacker DJ Williams with the impossible task of covering the tight end in a short zone and the WR in the deep middle. This play had home run written all over it, as the Steelers sent a WR on a route that trailed Antonio Brown - the target here - so the extra WR could block Chris Conte after the catch.

Thankfully, a phalanx of Bears defenders were there, and the one blocker wasn't going to spring Antonio Brown for extra yardage. Still, the damage was done, and the Bears took a game that was still sitting at a WP that couldn't have been upended except by a "They were who we thought they were!" type effort and made it into an almost-competitive affair on this play.

Finally, let's take a look back at that Fourth Down Calculator from earlier to get one final peek into what Trestman's fourth down thinking might be. If you plug in the numbers from when the Bears did go for it on fourth and one at the goal - 2:04 remaining in the first quarter with a point margin of 10 in their favor - you'd get these results: 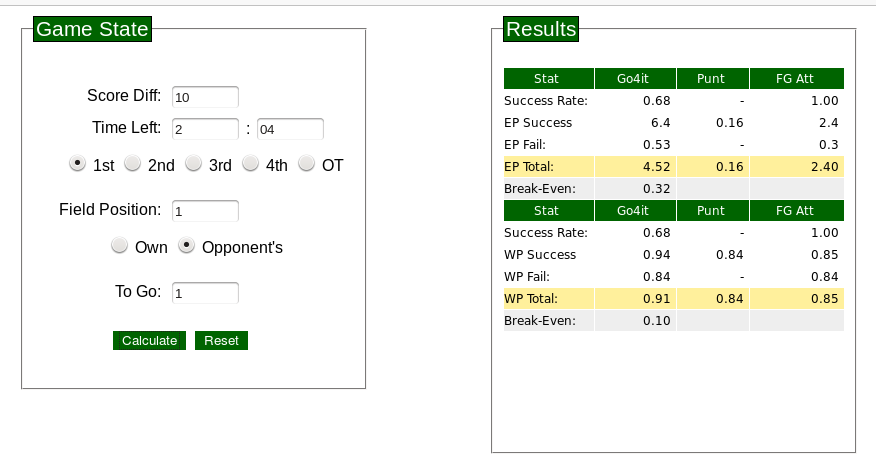 Much less exciting than a play diagram to be sure, but this is what is going through Trestman's mind as he contemplates his call, not Xs and Os. As you can see, teams have an average success of just under 70% on fourth and goal from the one, and the risk-benefit equation strongly points towards going for it: miss the conversion, and you'd have a .84 Win Percentage, but a made field goal would only give you a .85 WP. A touchdown, however, puts you at a 91% of prevailing, so it's all reward and little risk to go for six in this situation.

Under previous administrations, Bears fans were inundated with platitudes about how the game was managed. With Trestman, it seems that things are going to be run by the numbers. The Bears aren't out to avoid risk so much as manage it - take chances only when necessary on offense, and take advantage of risks taken by other teams on defense. If this approach can continue to pay dividends in the form of wins, both the Chicago Bears and fans stand to profit.