Two teams that seem just outside the top tier square off this Sunday in Soldier Field. Here are two plays from last year's Bengals loss to the Broncos that provide insight into how Marc Trestman can start his head coaching career off 1-0.

In many ways, the Bengals and the Bears are mirror images. Both teams run an offense rooted in the principles of the West Coast Offense, and both defenses feature a fearsome front four. The game might be won or lost in the trenches, but if we consider one injured Bengals tackle to be equally as dangerous to QB health as two Bears rookie linesmen, it's pretty much a wash on the offensive line.

You might not see a lot of the nickel and dime drives the WCO is famous for with all these expert pass-rushers on the field. I predict that this game will hinge on two key factors: which team can knock off more 15+ yard plays despite the question marks on the line, and which team can convert more red zone possessions into touchdowns. That was the story for the Bengals' loss last year to the Denver Broncos: Peyton Manning was able to drive the ball down the field in large enough chunks that his offense was able to neutralize the advantage the Bengals have in their front seven, and both teams were able to strike paydirt using their elite WRs.

Manning's success came in part because of solid blocking by his offensive linesmen, but an equal part was driven by scheme. Move a safety one way and a linebacker the other, and all of a sudden you'll have WRs running free well past the sticks. This is, of course, exactly what Marc Trestman has been doing with his offenses since his days in Oakland alongside John Gruden. The Bengals secondary is the one point on their defense that doesn't really compare to the Bears, so if Jay Cutler has the time, he'll be able to find his open man.

Here's the type of play that I'll be looking for the Bears offense to make and the defense to stop. First, take a look at the route combo from the overhead view: 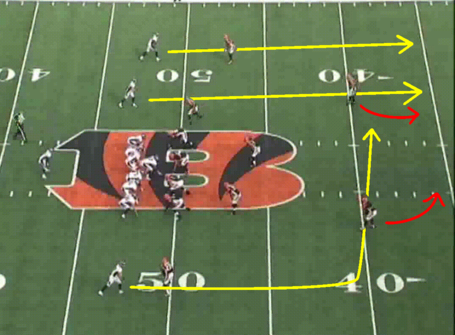 The two receivers to Manning's left run straight go routes, but the lone WR to his right cuts into center field after ten yards. The two go routes lure the safeties out of the way, but this still leaves a middle linebacker in between Peyton and his target. The answer to the linebacker comes in the form of play-action. The Broncos had already shown a commitment to the run, and on this second and six, the linebackers were all too willing to play run first.

The linebackers get suckered in, and the Denver WR crosses from right to left and comes free enough to make the reception. Twenty plus yards, all thanks to a bit of protection and a little deception. Cutler doesn't have to be a Peyton Manning to pick this defense apart. First, the Bears will need to show enough of a threat on the ground for play-action to work. Then with a good playbook and passable blocking, these plays will be there.

If Cutler feeds Marshall and Jeffery on slants like this, it can also set up the really big play. Imagine Marshall as the lone receiver to the right on a play like this - do you still think the safeties are going to work back as far as they did? If the receiver decoy of Marshall could get the safeties to take just one bad step, Cutler would have the option of taking an Alshon Jeffery or even a Marquess Wilson on a bomb of a pass.

Alternately, Trestman could just send everybody deep, and then have Cutler throw to a wide open Forte in the flat. From there, the RB would only need one or two blocks to get some major yardage. Big plays are probably going to be the name of this game, and I'd love to see Trestman and his QB get the youth movement and the RBs involved in a couple of them.

On defense, I worry less about the Bears defending against BenJarvus Green-Ellis and rookie Giovani Bernard as I do about Pro Bowl receiver A.J. Green. The kid looks like a Marshall Jr., using his size and athleticism to outmaneuver DBs and make splash plays. He did his fair share of that against the Broncos last season, and the matchup between Green and Charles Tillman should be one of the deciding factors in this game.

Bears fans know what this sort of play looks like from a season of watching Cutler and Marshall playing what looks like playground football. Second and nine from the ten yard line, and no defender is able to contend for the fade pass from from Andy Dalton to Green:

Green and Marshall can both make plays like these, but it's going to be up to the best CB tandem in the NFL in Tillman and Tim Jennings to make sure that A.J. Green has the tougher go of it. Considering Tillman has been kryptonite to Calvin Johnson over the years, in Peanut we trust, but we could be in for a long afternoon if the Bears give up easy ones like this.

What's the key match-up in this game for you? What is one play you would like to see the Bears make as they march to victory?