A cool graphic from Imgur user JorgeUrquidi on division records since 2002.

One thing that team President Ted Phillips focused on after Jerry Angelo's dismissal in 2011, and again by new GM Phil Emery after Lovie Smith was fired in 2012, was closing the talent gap and becoming more consistently competitive in the NFC North.

The Packers began building a very young, talented team several years ago, and Emery and new HC Marc Trestman have mirrored that model by stating they would be focused on building a younger roster in Chicago.

It's never easy to see some of the long-time veterans leave the team, as was apparent when Brian Urlacher rode into the sunset, but putting together a long-term vision takes a lot of trust from all parties involved.

Imgur user JorgeUrquidi made some neat little graphics showing divisional records since 2002, and the NFC North can be seen below.

Make sure to click HERE for all of the divisional graphics on Imgur. 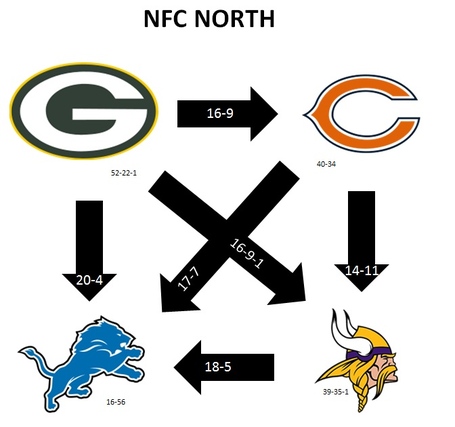