RoboMarsh: If only Brandon Marshall could play forever...

Did you know that RoboCop was coming out soon? We did, so we decided to turn Brandon Marshall into a robot.

Share All sharing options for: RoboMarsh: If only Brandon Marshall could play forever...

If you were tasked with choosing one current Chicago Bears player to turn into a robot in order for him to play forever, who would you choose? For us, it was a no-brainer...

For the foreseeable future, Chicago will not be the place that wide receivers go to die, but Brandon Marshall is a special player that doesn't come along very often. By the time it's all said and done, he could very well own every Chicago Bears receiving record, and may even sneak his way onto a Hall of Fame ballot or two.

If we could turn him into a robot (which you knew we were going to) and let him play forever, the Chicago Bears would win a LOT of football games. 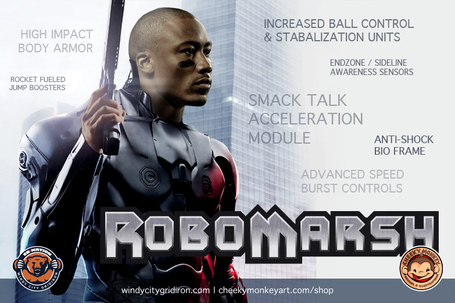 (credit to our very own David Taylor for the artwork)

In our RoboMarsh, special features include:

We also discussed which Chicago Bears player of the past we cold turn into a robot to play forever, and my answer was Dick Butkus. Of course guys like Walter Payton, Bronko Nagurski, and Chad Hutchinson could all be considered, but can you imagine a lifetime of abuse being doled out by Dick Butkus every Sunday for the rest of your life? Amen.

Who would be your choices to be able to play football forever (one present and one past) for the Bears?