The veteran wide receiver is coming off a solid, if somewhat unspectacular season. At a cap hit like his, the Bears would be best to let him walk.

Earl Bennett is one of those guys.  It seems many overvalue him.  He's the kind of guy who gets the "gamer" tag, or he "just gives it his all" or "Jay just really likes having him on the field." Just recently we've had another discussion on these boards about whether someone would be willing to trade a 3rd or 4th round pick for him.  A third or fourth round pick!

Well, there's absolutely no reason for someone to trade a 3rd or 4th round pick for him.  Let's take a look at a couple things. 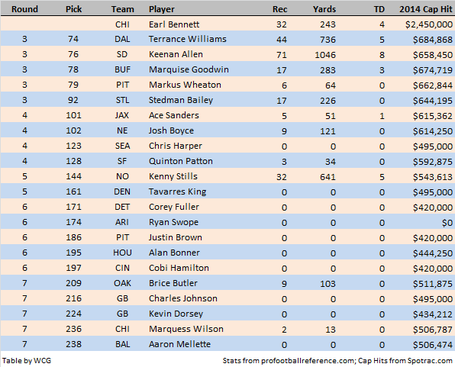 First up, here's a table listing Earl Bennett at the top, and all of the 2013 wide receivers drafted in the 3rd through 7th round. Two things jump out immediately:

The number of wide receivers making $400k+ to not catch the ball in NFL football games is somewhat stomach-churning. I mean, seriously. Were you drafted in the fifth or later?  Here's a bunch of money to lift weights.

3rd-round picks last year out performed Earl Bennett in 2013, and will count for about a quarter of the cap space.

Now, clearly, there are a lot of factors that can come into play.  The amount of time a player sees the field and the number of times a quarterback targets them play big factors into this sort of thing.  However, at the same time, those very things a reflection of the level of ability the player has, and the level of trust the coaching staff has in a player. The Bears do have two very solid receivers ahead of Bennett, and that clearly factors too.  Let's take a graphical look at the numbers above. 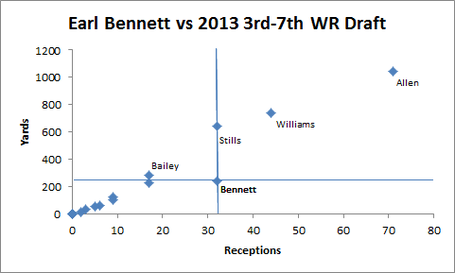 You can see Earl Bennett, clearly labeled, at the intersection of those lines. 4 wide receivers out performed him in yards, with two of them out performing in receptions, as well. Referencing the chart above, we can see that Earl Bennett's 2014 cap hit comes about $80,000 shy of covering ALL FOUR OF THOSE RECEIVERS. Furthermore, each of those young players sniffed the end zone more than Bennett, as well.

What's this all to say?  Well, why would someone trade the Bears a pick for him? It's clearly a more complicated issue than looking at a couple of stats, but the Chicago Bears offense is at a turning point.  Having enough weapons on offense means they can move forward, the Bears need to commit as many resources as they can towards fixing the defense and getting the team into the playoffs and pointed at a Super Bowl.   A restructure doesn't free enough funds to really help with anything, and still leaves you with a receiver whose stats have generally trended downwards since his rookie year. Cutting a guy who can pay for most of their late round draft picks just makes sense.