I consider myself an all around sports fan, but I'm having a hard time getting really interested in March Madness this year. NFL free agency, the NFL draft, NFL trade speculation, NFL rule changes, and pretty much anything NFL is dominating my interests. Check out my thoughts on the NFL this week.

1) Now that the NFL's Annual meetings are kicking off today I'd expect the Philladelphia Eagles to finally move disgruntled wide out DeSean Jackson. If you haven't been following the story, it all started when Jackson began griping about his paltry salary after his career year of 82 receptions for 1,332 receiving yards and nine touchdowns.

The tricky part about trading him is obviously the salary cap. Jackson may think his cap hit is chump change, but that's a lot of money to fit on a team's payroll. The other tricky issue is teams know the Eagles could release him, and that's hurting his trade value. The final issue is the prima Donna Jackson himself. Teams just may not want the drama that surrounds him.

If you were an NFL GM that had the cap space, would you flip a couple of mid round picks for DeSean Jackson?

2) It was an ugly break up between the Carolina Panthers and wide receiver Steve Smith, but Smith showed some class with his "Thank You" ad in the Charlotte Observer. Smith has been one of the best wide outs of his generation, and may be the best "little" receiver to ever play the game.

3) The Panthers signed former Minnesota Vikings QB turned WR Joe Webb, and they plan to move him back to QB. I've always though the Vikes should have left him under center when they had him. Webb isn't a classic drop back passer, but I thought he showed enough skill as a QB to be left to hone his craft as a back up.

Carolina believes his athleticism will allow him to run their offense that is built around Cam Newton. He's not as accomplished a passer as is Newton, but I think Webb will be a good stop gap while Newton rehabs his ankle.

4) Another QB I think has a chance to bounce back is Mark Sanchez who was recently cut by the New York Jets. Sanchez had an up and down career for sure, but if signed into the right system I can see a late career resurgence from him.

And for the record, Sanchez did the classy "Thank You" to fans thing as well.

5) Oakland Raiders owner Mark Davis is thinking about a relocation to Los Angeles again. Oakland, L.A., Fresno, West Covina, I don't think it really matters unless they can find a way to improve the product on the field. They haven't had a winning record since their Super Bowl runner up team in 2002 that featured an offense coordinated by Marc Trestman.

Their decisions this off season are again being met with confusion by many NFL people.

6) The internet NFL scouts and mock drafters say Teddy Bridgewater's poor showing at his pro day will drop him down draft boards. That's just idiotic in my opinion. Anyone can have a bad day and, while it's unfortunate that his bad day was on that particular day, he's still the same guy that threw for 58 TDs to just 12 interceptions his last two years at Louisville.

7) I expect Julius Peppers will have a bounce back season for the Green Bay Packers, partly because I believe they'll keep him much fresher than the Chicago Bears did the last couple years. Pro Football Focus had a real nice article about Peppers and what to expect from him in 2014.

This chart via PFF was a real eye opener. 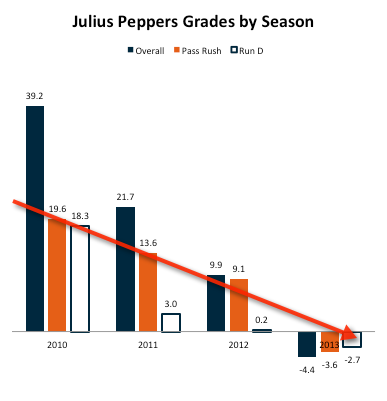 8) The Chicago Bears have lost the aforementioned Peppers along with Henry Melton and Corey Wootton off of a defensive line that was historically bad, yet some fans were pining for their return.

Peppers simply had to go at that unconscionable salary cap hit. If he were only on the books for much less I think the Bears would have held on to him.

Wootton, while proving to be a good teammate by kicking inside to defensive tackle, wasn't anything special during his time in Chicago. He had some injury issues at times, but after four mediocre years it's hard to pay a guy for that break out season you hope will come. I'll be silently rooting for him to succeed because I'm a fan, but I think he is what he is at this point. A serviceable defensive lineman.

Melton managed to get a "prove it" deal and then some from the Dallas Cowboys. The Bears weren't about to give him that much money, especially after his best success came with a productive Peppers playing on the same line as him. Maybe they viewed Melton's Pro Bowl level of play as the byproduct of better talent around him.

9) The latest mock draft is out from SB Nation, and they aren't mocking Pittsburgh DT Aaron Donald to the Bears at 14, instead they have Chicago taking Notre Dame DT Louis Nix.

The Bears invested a lot of money in the defensive line in free agency. Chicago could still use help on the interior, though. Louis Nix lost some value after an injury-plagued season in 2013, but he's lost a bit of weight and seems healthy for the first time in a while. If Nix falls to the back half of the first round, some team is getting a steal. In this scenario, the Bears don't let that happen.

Nix would make sense if the Bears are trying to get more versatile up front. Nix seems like the classic 2 gap 3-4 nose tackle, but he could also play in the Bears 4-3 scheme as the 1 technique NT. He would add some mass to their interior and improve the run defense, but he wouldn't add much to the pass rush.

10) Would you believe there is already an NFL Power Ranking out there? NFL.com dropped one last week, and they had the Bears at 14. Here's what they said about the Bears.

The Bears' free agency strategy in a nutshell:

We still wonder about giving so much guaranteed money to a guy (Houston) who has never broken the seven-sack threshold, but oh well. The defense needed help and the front office had cash.

After an 8-8 season the Bears are middle of the pack, right where they should be in my opinion.

Do you have any thoughts on the NFL this week?