Stop by for my weekly Thoughts on the NFL, and be sure to chime in with a few of your own in the comments section!

1) Mathew Stafford is considered a top 10 quarterback by some experts. From a fantasy football standpoint he's a widely considered a top 5 QB, but how good -- or should I say, how bad -- was he last year? Yesterday an article on CBSSports broke his 2013 season down, and when you list out all the bad in one place, it looks really bad.

So bad in fact, they left number four off their list.

1. He ranked 30th in completion percentage at 58.5, his lowest mark since his rookie year.

This surprised me, because check down options like running backs Reggie Bush and Joique Bell, who combined for 107 catches and 1,053 yards, should have given him a huge boost on completion percentage.

2. He ranked that low despite facing little pressure. According to Pro Football Focus, Stafford was pressured on just 28.9 percent of his dropbacks. Only two QBs were pressured less often.

I was surprised to learn how infrequently he was pressured by opposing defenses. I wonder how often he was spooked by the football?

When you have a go-up-and-get-it receiver like Calvin Johnson you'd think deep ball accuracy would be higher.

This is where CBSSports should have had number 4, so I'll just have to guess at what they may have used.

4. Stafford is the love child of Chunk from the Goonies and Jonah Hill. 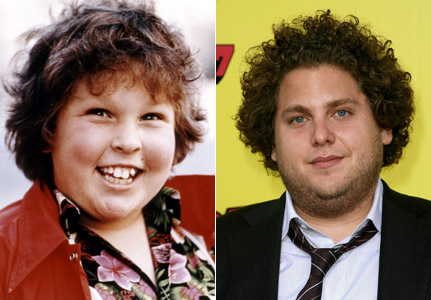 OK, maybe CBSSports wouldn't have gone with the cheap-shot love child angle, but then again, you never know, because they screwed up number five on their list as well.

This stat intrigued me so I decided to look up who was tops on play-action to gain some perspective. To my surprise I found that Stafford wasn't 24th in the NFL with a 80.9 passer rating, he was 16th with a 95.5. First on the PFF list was Peyton Manning with a 136.8. So who had the 80.9 you ask?

None other than Jay Cutler. Only he was 22nd among QBs that had least half of their teams total drop backs. Maybe the writer of the CBSSports piece is a Bears fan?

They finish up on the fantasy football front...

6. In the Fantasy homestretch, Weeks 12-16, Stafford accounted for seven touchdowns and 13 turnovers.

Yeah, I benched him down the stretch a few games last year.

With the addition of a legit #2 WR in Golden Tate, the excuses are running out for Stafford.

2) It's looking more and more likely that the NFL will add an additional playoff team to each conference, possibly as early as the 2015 season. I can get on board with this. I like it a heck of a lot more than a 17th game added to the schedule.

3) Can journalists and analysts please stop using the phrase, "He's not getting any younger," when talking about an older player?

Can I just say 'No shit Sherlock?'

4) If DeSean Jackson was solely released because of suspected ties with gangs, then that's the Philadelphia Eagles' prerogative. They have every right to foster what ever type of locker room they want, and if they feel Jackson is a bad influence on the team, then they had no choice to cut him. But that wasn't the only issue they had with him.

Besides Jackson's gripes about his contract, there were other distractions that gave the Eagles' regime pause.

A bad attitude, an inconsistent work ethic, missed meetings and a lack of chemistry with head coach Chip Kelly were the original reasons for his fall from grace

Where ever he decides to sign, and there are a few teams looking into adding him, these maturity issues will need to be cleaned up.

5) When ever I caught a Texas A&M game the last two years, the player that caught my eye the most wasn't the ultra-hyped Johnny Manziel, but rather his #1 receiver Mike Evans. I would not be surprised to see Evans as the first receiver off the board.

Sammy Watkins seems to be the consensus #1 WR from draftniks, but for my money I'm taking the 6'5" guy over the 6'1" guy every time.

6) Speaking of Manziel, I can't remember seeing such mixed reports on a draft status. For the record, I think he'll be a very good pro if he ends up in a system that allows him to play to his strengths, and he receives the coaching to check some of his recklessness. Sitting and learning for a year or two would be the best bet.

7) Danieal Manning has been released by the Houston Texans and speculation on a return to the Chicago Bears has already begun.

Do you think the 31 year old Manning has anything left in the tank?

8) Draft do-overs are always fun to read this time of year, and NFL.com has a doozy that will interest Chicago Bears fans. Before the 2005 NFL Draft, many Bears fans were pining for USC wide out Mike Williams, but the Bears went with Texas running back Cedric Benson. Both Benson and Williams tried their best to bust out of the NFL. Each had a late career resurgence, but neither lived up to the hype. Imagine how things would have gone had the Bears went this direction in that draft.

4. Chicago Bears
Pick: Cedric Benson, RB
Do-Over: Frank Gore, RB
Comment: Gore, the five-time Pro Bowler, is unquestionably one of the top backs in NFL history. He is the bell cow the Bears desperately wanted in Benson, but is a more consistent and explosive performer than his counterpart.

9) I saw something on Twitter last night from Steve Palazzolo, who is a Senior Analyst at Pro Football Focus and a contributor at ESPN.com, about the perceived value of prospects in the NFL Draft. With two "surprise picks" made by Phil Emery in his first two drafts, I felt it appropriate for Chicago Bears fans.

I imagine NFL draft boards are just as varied as Draft Twitter's boards. We just don't get to see the various NFL boards, but hear all draft opinions throughout process. Then we use 1/32nd of the NFL to judge a player's perceived value around the league (draft position).

You or I may believe a team is reaching on a player, but each team trusts only their own draft board. I'm sure they are aware of the negative or positive buzz around a player in the months leading up to draft day, but that should have zero affect on a scouting department that has put in a years worth of work prepping for a draft.

10) SB Nation dropped their latest mock draft and they have a familiar face at #14, Pittsburgh defensive tackle Aaron Donald. Despite his combine buzz, most mock drafters still have Donald being available at 14 for the Bears.

The surprise comes in the 2nd round where they mock South Carolina corner back Victor Hampton to the Bears at 51.

The Bears passed on a cornerback in the first round of this mock and need to address the position on day two. If not for his size, Victor Hampton might be more highly regarded. He has excellent ball skills and is tenacious at the point of attack.

Hampton is 5'9" and 197 pounds, with solid across the board combine numbers. Some scouts see safety in his future as he brings a physicality to the field.

What are your thoughts this week?