WCG catches up with Mike Ditka and gets his take on the Bears 2014 roster, Marc Trestman's coaching style, and what Chicago food he would take #1 in the draft.

One Chicago classic deserves another, so it comes as no surprise that Al's Italian Beef and Nancy's Pizza have partnered with Da Coach, Mike Ditka.  Yesterday, Al's newly remodeled location in the Chicago Loop hosted Ditka to announce his partnership with Al's and Nancy's, and WCG was on location for the event. 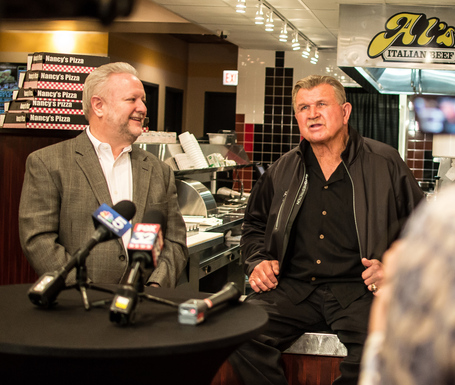 The event started with Dave Howey, the president of Chicago Franchise Systems, introducing Mike Ditka as the new spokesman for the two brands.  Ditka will be taking point on helping to expand both brands beyond the Windy City, and Ditka highlighted locations in his hometown of Pittsburgh and his former stomping grounds of Dallas as two places where he'll be helping open the new franchises.  As a long-time fan of Al's Beef and Nancy's Pizza, Ditka was proud to sign to sign on with the companies, and he'll be featured in the companies new ad campaigns and will be making the rounds to their current and new stores to visit with hungry Grabowskis everywhere. 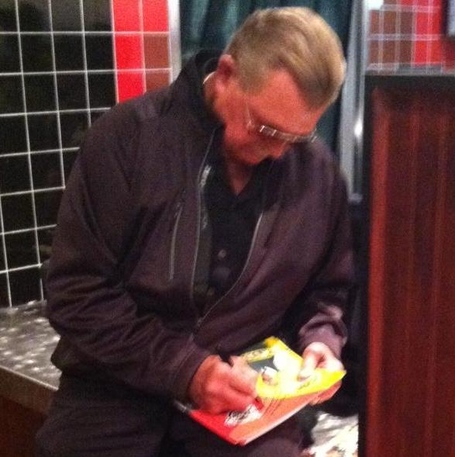 While talking about Chicago food with Ditka seemed all too appropriate, as any Superfan knows, Da Bears come before Polish sausage in our list of priorities.  I had the chance to talk about the draft, the Bears last season, and the team's prospects for 2014 with Iron Mike. 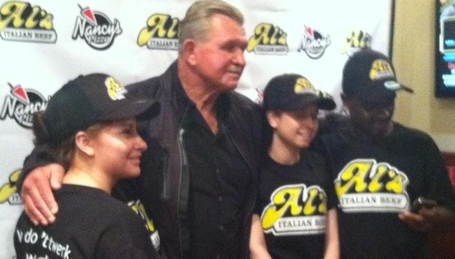 Ditka was always a coach who valued his running back, as his king's ransom of a trade for Ricky Williams when he was with the Saints showed, but he wasn't surprised at how little interest there was in running backs in this year's draft.  He doesn't believe that the running back position has been permanently given a backseat in today's NFL, saying that "teams will always place a high value on the running back position" and mentioning Adrian Peterson as a prime example of a vack who has the ability to change the game. Still, he said that GMs are wisely focused on the positions of quarterback, wide receiver, and the offensive and defensive lines in this modern NFL.  He pointed to draft picks made across the NFC North as examples of this, with each team spending one of their top two picks on these key position groups.

On the Bears draft, Ditka acknowledged that the Bears defense "needs some work," but he is optimistic that the team brought in the players that they need to turn things around.  Pointing out how heavy the Bears went on defense this draft, he stated that with the "great offenses in Green Bay and Detroit" that the Bears needed to, especially considering that both Green Bay and Detroit are extremely talented "across the board - quarterback, running back, wide receiver, and tight end."

Ditka did not make a legend of himself by being a nice guy, either as a player or as a coach. Asked whether he thinks that the rise of more "friendly" coaches such as Lovie Smith and Marc Trestman marks the end of coaches who bring the fire, Ditka doesn't think his style of coach is a dying breed. "Tom Landry didn't coach like Vince Lombardi," Ditka pointed out, and while "Marc Trestman is a quiet guy," Da Coach was impressed with how well he turned the offense around last season and feels that there is more than one way for a coach to lead a team to victory.

Ditka did admit to rooting for two very passionate sideline generals in former players, his former Bears Ron Rivera and Jim Harbaugh. Elaborating on the topic of Ditka's rooting interest, I asked Ditka how satisfied he was being the only ESPN analyst to back the Bears in their upset of the Packers on Monday Night Football, and the Coach didn't mince words, stating that while he "wasn't satisfied" proving his co-workers wrong, he would always back the Bears.  "I root for Harbaugh and Chico, sure, but I played with Chicago, I coached in Chicago, and Chicago is my home town.  I'm always picking the Bears, and I'm always happy to see them win." 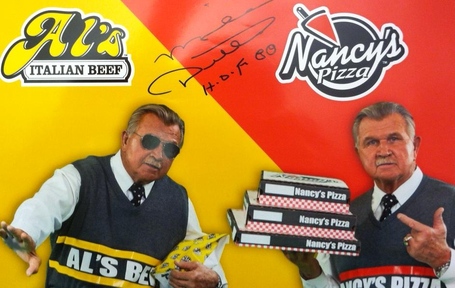 Looping back to the topic of food, I had to ask what meal Ditka would take first in a draft between Polish sausage, Italian beef, or deep-dish pizza.  Ditka's not a fan of the deep-dish, surprisingly enough, but even more surprising, he would take Italian beef with the #1 pick. His advice?  "Head down to Al's and get an Italian beef" - he takes his "run through the garden" - and then "walk down the street to Ditka's for some dessert - our banana cream pie is great." And with a bit of luck, you might run into Da Coach at either place.