We're going to pay a visit to the SB Nation college sites of the Chicago Bears rookie class to gain some insight on the newest Bears. Today we'll talk to Alex Alvarado, Editor at Hustle Belt, about undrafted free agent Jordan Lynch, formerly of the Northern Illinois University Huskies.

Share All sharing options for: Five Questions With Hustle Belt about Jordan Lynch

Recently we had the chance to speak with Alex Alvarado about Chicago Bears hopeful Jordan Lynch. Alex is an Editor of Hustle Belt, and they cover all things MAC. Last season the NIU Huskies, led by quarterback Jordan Lynch, went 8-0 in the West division of the MAC. The Chicago Bears signed Lynch as a priority free agent after the draft, and intend to change his position to running back.

I also partook in a Q&A with Hustle Belt about Lynch's chances with the Bears, and you can find that by clicking here.

Windy City Gridiron - Jordan Lynch seemed to have embraced a position change to running back, whereas some other quarterbacks known for their running skills have fought the move. Was Lynch really that poor a QB prospect, or is he just smart enough to know his best chance at an NFL roster?

Alex Alvarado - Personally, I think there's this stigma about quarterbacks that can run. If you're a quarterback that can run in college, then everybody thinks you're better off at running back or receiver. Obviously, Lynch was hit with that. As much as I wish he would've been given the chance to play quarterback instead, he'd be stupid not to sign with his hometown team.

Windy City Gridiron - Do you think Lynch has the quickness and speed to play tailback or would he be wise to bulk up for a fullback or H-Back role?

Alex Alvarado - I'm going to take the latter on this one. Not saying he's slow or anything, but he's a physical dude. Bulking up to run through a defender, rather than run around, would just make him better at what he already does fairly well.

Windy City Gridiron - Some games it really seemed Lynch willed his team to win; do you think that kind of leadership can translate with his move away from quarterback?

Alex Alvarado - He really did put the team on his back a lot, but his Huskies team wouldn't have won those games if the NIU defense (with a pair of Draftees) didn't do their job. On offense, Lynch is a one-man band and loved by his teammates/community. The kid's humble, and I'm certain that he's just more thankful for the opportunity to play at the professional level than he's worried about which position he plays.

Windy City Gridiron - Some people see all those rushing yards from Lynch and assume he's racking them up on scrambles, how often was his number called on designed runs?

Alex Alvarado - I don't have the stat for that, but my intuition is saying that more than most of his carries were on designed runs. Chandler Harnish (the NIU QB before Lynch) was a scrambler, too. I'm sure that there's a few chapters in their playbook that has pass plays where they say "if the X and Y receivers are covered, run it."

Windy City Gridiron - Do you think Jordan Lynch has a chance to make it in the NFL as a running back?

Alex Alvarado - I think if he isn't very established at running back this year, then he won't have very many opportunities to play in the NFL in the future. Nobody's asking the kid to start ahead of Matt Forte, but I think that Lynch's chances to be successful and have a good 5-or-so year career in the NFL is better than I'm willing to give him credit for. I can be such a pessimist sometimes.

Thanks again to Alex Alvarado from Hustle Belt! 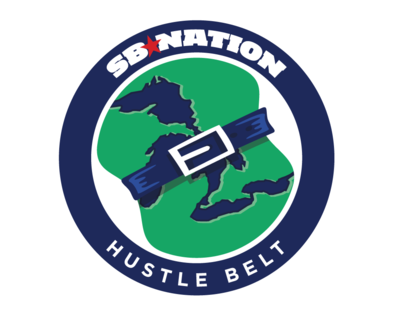