Kyle Fuller is not a safety

“I feel like they know I can play corner, nickel and possibly safety,” Fuller said in a conference call with reporters. “I’m a versatile player.” He may feel that way, but Kyle Fuller is not playing safety in 2014 for the Chicago Bears.

Share All sharing options for: Kyle Fuller is not a safety

What would you expect the kid to say?

'Nah man, I'm a corner, bottom line, corner or nothing.'

Almost every NFL Draft pick is humble when meeting the media for the first time. Everything's positive. They'll do whatever the coaches ask them, they'll play any position, they'll play special teams, they'll sit and learn from the veterans if need be. So I'm not surprised by Kyle Fuller's quote, "and possibly safety."

Only he's not playing safety for the Chicago Bears.

He was drafted based on his being atop Phil Emery's cornerback board, not because he was on their safety board somewhere.

At Virginia Tech Fuller played outside at corner and inside at nickelback. Some scouts point to him also having time at linebacker and safety, but that's a bit misleading.

Chicago Bears general manager Phil Emery said Fuller played some "inverted safety" against Georgia Tech's flexbone option offense. He was asked to play close to the line of scrimmage that game, and shoot the A Gap because he's a physical player. A lot of what Georgia Tech does is start with a fake to the running back before getting into their play. Fuller was to attack that mesh point and disrupt the timing of their offense.

Fuller did receive a number of starts at linebacker in college, but it was at the "whip" linebacker position. In Virginia Tech's defensive scheme the whip linebacker acts like a safety/nickelback/linebacker hybrid.

The Whip is a key perimeter position in both the running game and the passing game. It requires a player with the athletic ability to blitz off the edge, to cover receivers down the field, and to play containment against the running game.

In (Virginia Tech's defensive coordinator) Bud Foster's current scheme, the Whip always aligns to the wide side of the field. Against base offensive formations, the Whip will set up as a traditional outside linebacker off the shoulder of the Stud end. Against 3-4 wide receiver formations, the Whip will step out and match up over the slot receiver to the wide side of the field. In obvious passing situations, the Whip sometimes will align several yards off the ball in a pseudo-defensive back position, typically when in man coverage against the slot receiver. 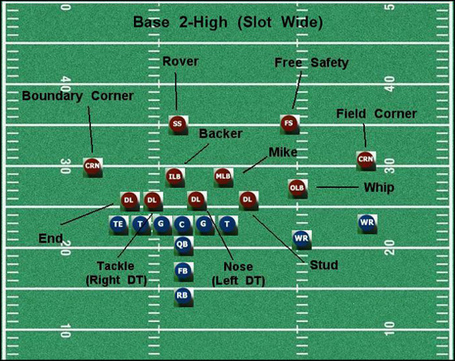 So yes, technically Fuller did play some linebacker in college, but it was a hybrid position that the athletic Fuller could excel at.

The last two years at Va. Tech, Fuller was primarily playing outside at corner, and with the Bears he'll be sticking at corner, albeit nickel as well as outside, too.

When Phil Emery speaks on Fuller's versatility -- and he does a lot --, he's not talking about him moving back to free safety, he's talking about his ability to cover various types of players from both inside and outside on an island.

"We decided on Kyle Fuller, the player," Emery said. "That's the important thing. He's a good player with a lot of versatility in his coverage."

"His versatility of coverage was a big attraction,"

Fuller checked in at 6'0 , 190 pounds at the NFL Combine, with an arm length of 32 7/8". To put those and his other combine measurables in perspective with his rookie class, check out this neat spider graph.

Emery said, "He is a corner; that's how we see him. We see him as a guy who has a lot of versatility in terms of coverage."

In 2014 Fuller will compete for the nickelback job, he'll get reps outside at corner, and he'll spend time as a special teamer. Defensive coordinator Mel Tucker could use him to shadow athletic tight ends, to blitz off the edge, or to shoot gaps from anywhere along the defensive front. Somehow, someway, the Bears will get Fuller on the field.

He's just not moving back to safety.