You have $20, seven position groups to fill, and 35 choices to choose from. Whom are you picking for your All Time Chicago Bears roster?

By now you've no doubt seen games like this flying around social medial. The first one I saw was the Create an NBA All-Time Starting Five with $15. Quick spoiler alert for that game, any team with Michael Jordan ($5) and Scottie Pippen ($1) would win. That's just pure basketball science.

Then I saw our sister site, Big Cat Country, do a similar game, but they were missing a couple position groups that are important in Chicago Bears lore.

So after some deep thought and an assist from our graphics guru David Taylor, we present for your amusement the Build-A-Chicago Bears All Time Roster Game! 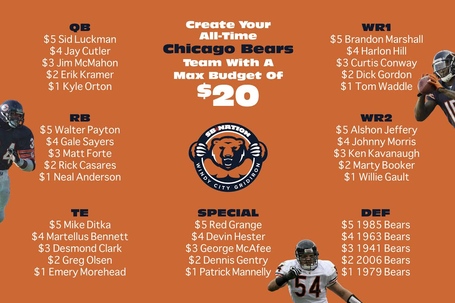 I'd like to send a heartfelt apology out to the Moorehead family, I inadvertently spelled Emery's name wrong on the graphic above...

With the long and illustrious history of the Chicago Bears, there are plenty of other players I could have listed for this game but, for now, we're rolling with this group.

Be sure to share the game with your friends, family and Bears fans around the world!