Pro Football Focus has partnered up with ESPN Insider to rank every roster in the NFL. Since they are behind a pay wall we can't bring you the entirety of the list, but we will spotlight a couple things.

Last month Pro Football Focus did a depth chart breakdown for the 2014 Chicago Bears, and you can find that right here. It's an ongoing series they're running and they have actually revealed over half of the team's breakdowns; you can find those by clicking here.

Besides their annual roster breakdowns, PFF has partnered up with ESPN to rank each of the 32 NFL rosters and, even with the plethora of defensive changes made by Chicago GM Phil Emery, the Chicago Bears ranked 15th. They are the 8th ranked NFC team, and the 3rd NFC North team.

We can't bring you their entire breakdown, but we will spotlight what they said about the Bears.

The Chicago defensive line last year may have been one of the worst units in football.

Truer words have never been spoken.

It was a disaster that only became worse as injuries bit, forcing defensive end Corey Wootton inside to play as an every down 3-technique defensive tackle. The good news is the team saw the problem and aggressively sought to fix it this offseason, bringing in upgrades in the form of Lamarr Houston, Willie Young and Jared Allen. Not content with that, they also spent draft picks in the second and third rounds on the line.

The secondary should be boosted by Charles Tillman being back 100 percent healthy, but they also planned for the future by drafting Kyle Fuller in the first round. Linebacker remains the biggest problem on defense, with Shea McClellin trying to transition to a completely different role and Lance Briggs trying to hold things down virtually on his own.

By the numbers: Despite the additions on defense, seven of the starters are graded as average or worse (58.3 percent), with rookie Fuller an unknown quantity. On offense, Brandon Marshall is the lone blue-chip player, but receiving partner Alshon Jeffery is hot on his heels as a high-quality player. 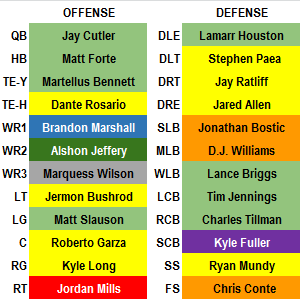 It's really hard to argue with any of their color codes. You'd like to think Chicago's 2nd year players will make a big jump in play, but we'll need to see it to believe it. Fullback Tony Fiammetta isn't represented on their depth chart, but I think he's about as average as H-Back Dante Rosario.

The Bears have already announced that rookie Kyle Fuller will be playing outside when they go to their nickel package, with Tim Jennings kicking into the slot.

I think if D.J. Williams can remain healthy the Bears will at least get average production from him at middle linebacker. He was just starting to round into shape last year before the Bears lost him for the season.

Just as a FYI, they have 3rd DE Willie Young rated as a good starter, even though he's coming off the bench. If the Bears are able to keep a fresh rotation on the defensive front, it'll allow everyone to meet, and possibly surpass, expectations.

What are your thoughts on the Bears' 15th overall ranking, and on the ratings of the individual Bears players themselves?