Read about "Grow Strong with Kyle Long," and get the scoop on the Bears' coaching changes and how each group of linesmen is shaping up this off-season in our exclusive interview with Chicago Pro Bowler Kyle Long.

No Chicago Bear would ever let a little bad weather ruin gameday, and Kyle Long's "Grow Strong with Kyle Long" event for children went off without a hitch this Saturday despite threatening weather on the horizon.  Attendees to the event, held at Uncle Bob's Self-Storage near Wrigleyville, were treated to bouncy castles, healthy snacks, and a chance to meet and greet the second-year linesman.   Also, in the case of one lucky brother and sister, the event offered a chance to test their skills at FIFA World Cup 2014 with Long: 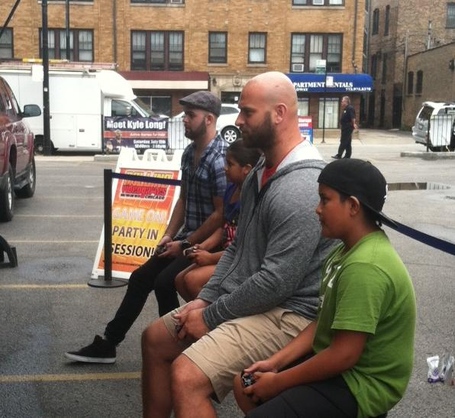 Kyle Long is spreading a "keep active" message to kids and parents alike in Chicago, and based on Kyle's FIFA skills, he clearly didn't spend too much time playing video games growing up. Since his parents obviously had some success in raising two NFL players in between himself and brother Chris Long, I asked Kyle what advice he has for parents.  He said, "The hardest days for my parents were when we didn't get our exercise in, we were just bouncing off the walls. You have to make sure your kids are active, and that's something my parents really stressed at a young age with us... it really helped us."  Now getting to pay that effort forward, Kyle said, "Getting to come here, play FIFA, hang out in the bounce house with these kids - you can't beat it."

Kyle had equal praise for his new family, the Chicago Bears, as lead by Marc Trestman.  Regarding Trestman's locker-room culture, Long stated that "the culture which Marc Trestman has started to instill in the Bears facility is one of men of character, men who go about things the right way... you can really take that off the field with your family, your wife, your girlfriend, your husband, your son, your daughter.  You try to lead your life by example, and that's something that Trestman has done a really good job with."

Trestman and GM Phil Emery shuffled the coaching deck on offense this off-season, and Long is very impressed with the additions and changes.  Of new offensive line coach Pat Meyer, Long called him "awesome," elaborating that "He's one of my favorite coaches on the team, someone I spend a lot of time with off the field.  He's a funny guy, he's a player's coach, he's got a lot of experience - he's been everywhere - and we love him."  On the greater role Aaron Kromer has now taken on across the offense, Long told me that,"Krome is a jack of all trades.  He does the quarterback position, the offensive line position, the running back position.  The offense as a whole revolves Kromer's knowledge and his ability to articulate subtle nuances to the team.  We love Krome, and we're really lucky to have the coaches we have."

Switching from coaches to players, I asked Long about the Bears offensive line, which is returning all five starters from last season.  Long said, "It's really rare to have that - five guys who started every game last year.  We're really blessed to have those five guys.  I was texting the guys on the way over here, checking up with them, and we're trying to get together for dinner. We have a great group of guys."

While the Bears offensive line was a blessed with both good health and good performance last year, the defensive line was a slightly different story.  But Kyle Long's first-hand take on the new defensive front is positive so far.  As he said of the revamped defensive line, "They look like a bunch of crazed dogs.  It's hard practicing against that group, they're such tremendous players.  They bring a lot of energy to the defense. Obviously we were dismantled last year because of injuries, but this year we have a new-look defense, guys are healthy, and we're ready to go."

You can see the effects that Marc Trestman's tutelage has had on the second-year player.  When asked about his goals for the season, he said in order, "Be the best teammate I can be.  Try and win a Super Bowl.  Try to make memories with the guys I'm playing with." Kyle Long appears to be hitting his stride as a player and a "man of character" moving into his second season, and I'm sure I'm not the only Bears fan who hopes he can help make good on that second goal.