WCG had the chance to catch up with Brandon Marshall at a youth sports camp he is sponsoring with Miami Heat player Dwyane Wade. Hear Marshall's thoughts on working with and mentoring young athletes and his hopes for the upcoming season.

Today and tomorrow, Brandon Marshall is joining forces with long-time friend Dwyane Wade to host the aptly-named "Dwyane Wade and Brandon Marshall Sports Academy" in New Lenox. Along with providing a diverse group of young athletes the opportunity to hone their craft through practice and skill development drills, the two elite athletes are sharing their own life lessons with the group of football players, basketball players, and cheerleaders.

The camp is a long-time project of Dwyane Wade's, and his foundation partnered with the Boys & and Girls Club to provide 100 scholarships to student-athletes from Wade's old stomping grounds on the south side of Chicago.  New Lenox mayor Tim Baldermann was also integral in setting up the event, both through his own individual work with the Boys & Girls Club and by ensuring the entire local community was chipping in to support this worthwhile cause.

Marshall and Wade spoke to the entire group of campers and had some great words of encouragement.  Both athletes hammered home the importance of persevering through adversity on and off the field or court, emphasizing that hard work, teamwork, and technique can lead to success in sports as well as life. 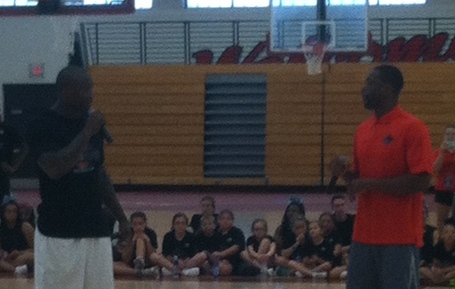 After speaking with the camp participants, Wade and Marshall spoke to the assembled media.  Marshall, asked about what these events mean to him personally, said that "When you have a camp, it's about relationships.  It's pretty cool to see that relationship grow with a camper.  I go back to my first camp, I worked with a kid named Nike.  It was amazing to get to know him and go on his journey with him.  It's great for the kids, and it's great for us as athletes and hosts."

Asked more generally about what lesson they have learned as mentors to young athletes, Wade responded, "It's about transparency with youth. I really like to be an open book.  Let these kids know that no one is perfect.  Let them know they are going to be better for the mistakes they make, and expressing to them the mistakes I make.  When I open up to them, they are free to let it out."

Marshall elaborated on that need for transparency, saying that "You find your purpose in your pain, and these events give me a platform to share my experiences with campers. Events like this give me the opportunity to let that blessing pass through me."  To bring the point home, Marshall said that mentorship "could be that one seed that you plant in someone's life that will take them to the next level."

Marshall, asked to elaborate on his message of teamwork, hard work, and technique he had shared with the group, stated that "God blessed me with great size and ability, but I think if you look at a Dwyane Wade, a Lebron James with Miami, it's the little things that people don't see - the technique, the dedication, what they do before practice. To be a Brandon Marshall, a Dwyane Wade, yes, you have to be fast, you have to big.  But even if you can jump high in the gym, you need that mental piece:  the game is 75% mental, 25% physical.  It's the same with life.  We try and communicate that message in our camps."

Following up from a Q-and-A session that the two stars had with campers earlier in the day, we wanted to know what kinds of questions the two had gotten from the youngest campers in the group. Wade chimed in, saying that he really liked the question one young girl asked about his favorite thing about playing basketball was.  As he put it, "You really don' t think about that, so it took me back to think about why did I start playing the game of basketball."

More humorously, one young basketball player had a more pointed question for Dwyane Wade: "Why do you flop?" Wade elaborated on that one, saying "He must have asked me three times! I thought he was joking, but he was serious.  His dad must have put him up to it."

Delving into the long-time relationship between the two players, Wade said that the two met when Marshall was first traded to the Dolphins and have been close ever since.  Wade, a life-long Bears fan, said that it was "awesome" when Marshall came over to Chicago, and he was very glad that Marshall was able to sneak in time to help with the sports camp despite Bears training camp starting tomorrow evening.

On the prospect of training camp, Marshall was none too excited.  As he put it, "I don't like camp, but it's cool. Since I'm getting older, now I know how to work smarter, not harder.  That time is approaching, and I'm really excited about the guys we have, both coaching staff and players. We look good on paper, but we have to prove it.  This is a special opportunity for me, having a chance to get with Dwyane. I want to be in his position, I want to be a champion, I want to have a foundation like him, I want to do what he's doing.  Just having the opportunity to be around him, I get to pick the brain of a true champion on and off the court.  I want to take a bit of that and bring it into our locker room."

Wade and Marshall with a representative of the Boys and Girls Club, Mayor Baldermann, and Tragil Wade

Wade followed up on the response, saying of Bears training camp that he's "looking forward to it too - you determine how good my Sunday is going to be!" He talked about his collection of Bears gear, and went on to say that "I understand how fans get mad at me, because you should hear what I'm yelling at my TV!" Turning to Marshall, he said, "Well, you might have had thirteen catches, but those three you dropped..."

Many thanks to Brandon Marshall and Dwyane Wade for hosting a wonderful event, and an even greater thanks go to Wade's World, the Boys & Girls Club, and Tim Baldermann for ensuring that underserved youth were able to participate in this excellent opportunity for children to grow as athletes and young men and women. If you're interesting in seeing Marshall and Wade go head-to-head tomorrow - or simply to learn more about the Camp -check out their Facebook page for all the details.