(WCG recently received some publicity material about 2nd round rookie DT Ego Ferguson's baby daughter's achievement and we thought it would give our members a nice insight into the family life of the man behind the facemask.)

No other accessory symbolizes a queen better than her Crown. Little Farrah’s crown was adorned with beautiful Sapphire Blue stones. Her crown and banner will be worn when she makes her official appearances as Baby Miss Louisiana Florida Parishes Queen. 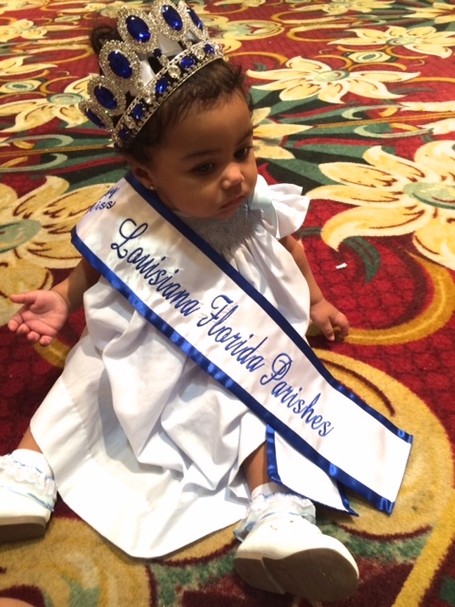 Her mother and father were on the same page of getting Farrah started into pageants early, which helps build social skills, confidence, personality, and professionalism. It also gives her an opportunity to mingle with other babies. Her mother has a long history of winning pageants and being a title holder, as well.

Farrah Ferguson first became a public figure from the lifestyle that her mother has lead, including her mother’s formal education and unique history. She is the first and only child of Ego Ferguson, Jr and her mother.

Farrah’s parents met while attending LSU. Her mother is a graduate of LSU. Ego begged her mother for five years for the opportunity to become her gentleman. After time together, from the union of Ego and her mother, a beautiful daughter was produced. 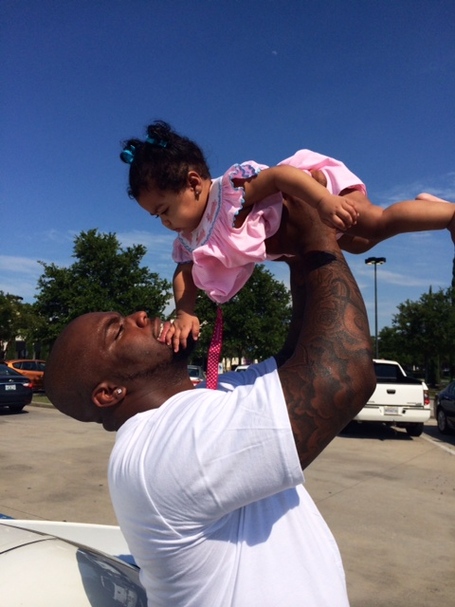 Ego Ferguson gives kisses to his 8-month-old baby Farrah while holding her in the air.

Farrah has taken the title of a baby socialite, who is well known in the fashionable society and spends a significant amount of time participating in educational and social activities, such as various fashionable events, pageants, and other similar standings. Farrah will be having her formal Blessing Ceremony at a private Chapel in the near future, which will be held either in Chicago or Florida where her father is from.

Farrah is an animal lover. She takes a keen and highly knowledgeable interest in stuffed teddy bears, especially the Chicago Bear Teddy Bear. Her other interests include educational flash cards and her mother reading to her.

Farrah is learning how to say "Sack the Quarterback Daddy", "Block that field goal daddy", "Super Bowl", and of course "Bear Down." So far she has mastered "Dadadada," "bye-bye", "mama", and an occasional "I love you."

While her daddy Ego was on break from rookie camp he played with baby Farrah at Gymboree, took her baby boutique shopping, and enjoyed feeding her organic baby foods. Ego feels Farrah is his lucky charm and one of his biggest motivations for this upcoming football season. 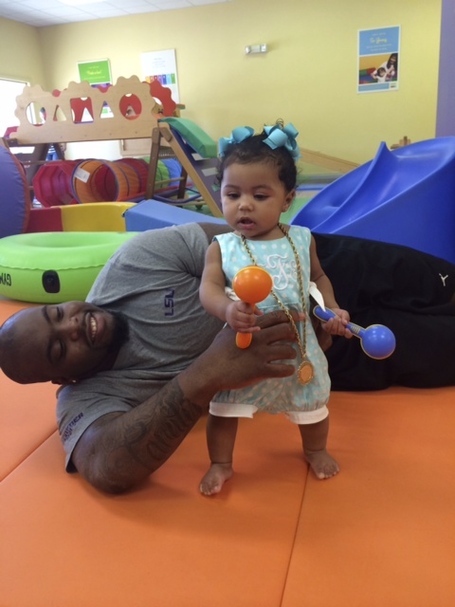 Ego Ferguson plays with Farrah at Gymboree while on break from Bears Rookie Camp.

Follow Farrah’s instagram page @farrahferguson as she cheers on her beloved Chicago Bears and her daddy #95 Ego Ferguson, Jr! Hit her up, follow her, and say congrats on her winning her new Baby Miss Louisiana Florida Parishes Queen title. She wants to warmly reach out to all of Illinois, fellow Chicago Bear Fans, and all sports fans. Farrah wishes her daddy #95 Ego Ferguson, Jr. and Da Bears all the best in camp. 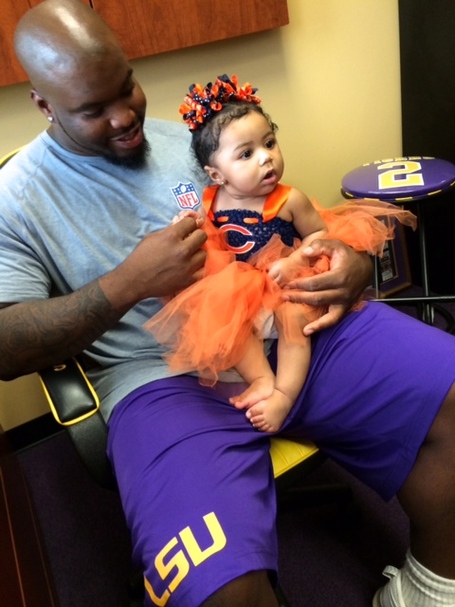 Ego Ferguson holds his baby girl Farrah as she wears her Chicago Bears Tutu Dress, which has his jersey number 95 embroidered on the back.

(We here at WCG would like to congratulate Farrah Ferguson and her proud parents. This goes to show that Bears = winners. Let's hope her daddy will also be crowned a champion with the Chicago Bears in the near future!)