Now that the first week of preseason is in the books, I think we all know exactly how each and every player on the 32 teams will fare this year.

1) NFL fans had a real treat on Saturday night, when Johnny Manziel and his Cleveland Browns played a preseason game. Hip Hip Hooray for Johnny Football!

Wins and losses don't matter in the preseason, the important thing is how the players fighting for roster positioning look, and Manziel looked ok.

SB Nation's Danny Kelly -- and lead writer at FieldGulls -- did an extensive breakdown of Manziel's night right here. Kelly spotlights numerous plays from Johnny Football and talks about how Browns' new offensive coordinator Kyle Shanahan might use his QB.

If you're still not sold on him making the NFL transition, you'll have another national game to watch this week as the Browns travel to Washington in the first Monday Nighter of the year.

2) Remember a few seconds ago when you read that "wins and losses don't matter in the preseason"?

Well... Apparently that doesn't apply when talking about the Great Lakes Classic.

When thinking of important team football trophies in the NFL you can probably rattle off the Vince Lombardi Trophy, the George S. Halas Trophy and the Lamar Hunt Trophy.

College football has quite a few meaningful team trophies as well, such as the Little Brown Jug, the Jeweled Shillelagh, the Land of Lincoln Trophy and The Stanford Axe.

But I had no idea that the winner of the preseason tilt between the Detroit Lions and Cleveland Browns receives this bad-boy. 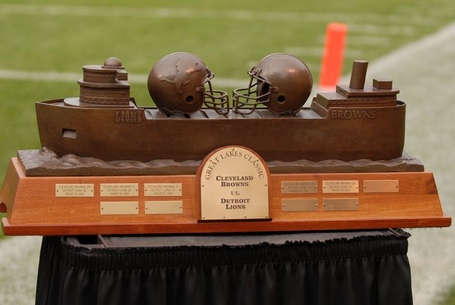 3) I know it's early, but rookie 20th overall draft pick Brandin Cooks sure looks like he'll be a big part of the New Orleans Saints in 2014. After lighting up training camp, the 5'10" wide out was used in a variety of ways by head coach Sean Payton en route to a 5 catch, 55 yard, 1 TD performance in their game against the Rams.

4) The New England Patriots seemed to be showcasing back up QB Ryan Mallett for a potential trade, but Mallett didn't cooperate. He went 5 of 12 for 55 yards, and at this point he probably wouldn't even bring a bag of balls in trade.

It's not all doom and gloom behind Tom Brady however, as Rookie Jimmy Garoppolo from Eastern Illinois finished 9 of 13 for 157 yards and a TD.

5) Those Hip Hop Heavyweights, The Manning Brothers, are at it again. Did you see their latest "rap" for DirectTV's NFL Sunday Ticket?

And speaking of the Sunday Ticket...

I figured I'd share this DirectTV nugget with you because I recently discovered it my self. Did you realize you can stream the NFL Sunday Ticket though your game console? I can't get a DirectTV dish where I live, so I was forced into being a nomad Chicago Bears fan last season, travelling from friend to bar to B-Dubs each game.

I felt like it was Christmas morning when I discovered NFLSundayTicket.tv.

This year the NFL Sunday Ticket can be streamed on laptops, tablets, smartphones or a game console. The kicker is you have to qualify by proving you live where DirectTV isn't offered. It's as simple as entering in your address, and voilà, I qualify and I'll be watching the Bears from the comfort of my living room.

I hate to sound like I'm pimping out their product, but I was really excited when I found this out and wanted to share it in case some of you are in the same boat as I.

6) The Minnesota Vikings will host the Washington Redskins this season at the University of Minnesota because the Vikes' new stadium is under construction. The University is requesting that the word "Redskins" not be used in any promotional and game day materials.

7) Orlando Scandrick of the Dallas Cowboys will be suspended four games by the NFL for PED use. Apparently he unknowingly took something while on vacation in Mexico. His appeal has already been denied by the NFL.

On the heels of Ray Rice's two (2) game suspension for conduct detrimental to the league knocking out a woman, this is just so asinine.

8) Scandrick's suspension wasn't the only recent bad news for Dallas. Billionaire and married owner Jerry Jones popped up in some leaked photos with a couple of strippers. The photos were to be used in an extortion plot by some knucklehead that calls himself the "Son Of God."

And what exactly was the "Son" planning to extort?

"I asked for nothing in return except a meeting with Jerry."

9) Rex Grossman had a tryout with the Miami Dolphins yesterday, then signed with the Browns today. I can't think of a better mentor for young Johnny Manziel than Sexy Rexy.

All kidding aside, Grossman does know the Kyle Shanahan offense and he can help both Manziel and Brian Hoyer perfect the system.

10) Bears fans, how surprised were you by the performance of Zach Miller?

If you've been keeping up with WCG, hopefully not too surprised.

Zach Miller has some size and athleticism to his game, having run a 4.53 40 at his 2009 pro day at 6'4", 240. He caught 21 and then 20 balls his first two years as a pro in Jacksonville, but he's been injury prone. Perhaps he can be the Joker type TE that the Bears were hoping to get in Fendo Onobun.

I still say Miller is a long shot to make the roster. Dante Rosario can line up in various spots too and he's a good special teamer. If Miller keeps flashing good awareness, good hands and a little wiggle to his game, it'll be hard to let him go.