What are the 100 Things Bears Fans Should Know and Do Before They Die?

If we were to ask our readers to list things that every Bears fan should know and do before they die, we'd probably need to leave the comment section open for months. Thankfully Triumph Books has compiled 100 such things so we'll take a look at a few of them right now.

Share All sharing options for: What are the 100 Things Bears Fans Should Know and Do Before They Die?

As a sports writer Kent McDill has covered Chicago Sports since 1985. He currently covers the Chicago Bulls for NBA.com and writes for MillionaireCorner.com. Prior to those he covered the Chicago Bears for the Daily Herald from 1999-2007. He also covered the Bears from 1985-1988 for United Press International.

McDill's Bears fandom began as a child in 1966 and he was fortunate enough to work as a beat writer for Chicago's only two Super Bowl appearances, 1985 and 2006.

His latest book, published by Chicago's own Triumph Books, is titled 100 Things Bears Fans Should Know & Do Before They Die. It's a trip down Memory Lane for long time fans of the Chicago Bears and a great historical teaching tool for the newbie Bears fan. 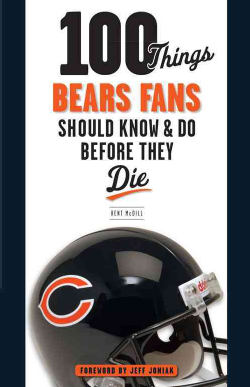 The book's foreword is written by long time play by play man Jeff Joniak and in it he references a quote by Bears' owner Virginia McCaskey. "Baseball divides Chicago; football unites." Chicago is, and always will be, a football town.

McDill picks Virginia's father to be number one on the book's list. Without George Halas there would be no Chicago Bears and there may not have been a National Football League. Did you know that while the Bears flourished, Halas devised a profit sharing plan to aid the other struggling franchises in the league?

Walter Payton and the 1985 Bears are numbers 2-3 on the list, but there are other mentions of Sweetness and that great team throughout the book.

Mike Ditka the coach (#4) and player (#22) are mentioned in the book. Former defensive coordinator Buddy Ryan (#23) and Ryan vs. Ditka (#24) each receive a chapter.

Staley Da Bear and the Honey Bears are also mentioned (#92). Did you realize that the 1985 season was the Honey Bears' last? Perhaps the Cubs aren't the only team in the city with a curse hanging over it.

Did you know that George Halas actually saved the Packers (#83) or how the name "Monsters of the Midway" came about (#17)?

I've only scratched the surface on all the interesting nuggets of information that is permeating through McDill's book.

Do yourself a favor, go get educated on the Bears and go read the book.

What are some of the tidbits you'd like the next generation of Bears' fan to know about the team?

Also what are some of the Bears related things you hope to do or see in your lifetime?