Bears vs. 49ers: Why Each Team Could Lose on Sunday Night Football

The Bears head out to the Bay area to help the 49ers open up Levi's stadium in style. Where can each team find an advantage?

Share All sharing options for: Bears vs. 49ers: Why Each Team Could Lose on Sunday Night Football

How each team could win is the subject of today's collaboration with David Fucillo of our sister site, NinersNation. (Check out yesterday's "Under the Radar" article here.) More accurately, instead of focusing on the strengths of each team, we're going to take a look at why each team could lose to get a better idea of where each team has its weakest points.  First up, David shows us where the Bears could attack the 49ers, and then we'll do the same with the Bears.

The 49ers offense got off to a good start last Sunday against the Dallas Cowboys, with Colin Kaepernick looking particularly sharp early on. The team jumped out to a 28-3 lead thanks in part to the offense, and in part to Tony Romo imploding, so much of the second half was a little bit more low key.

The key to beating an improved 49ers offense will be getting pressure. The offensive line has had its ups and downs, and could welcome back Alex Boone this week. Left guard Mike Iupati has arguably been the biggest weakness, and it has nothing to do with physical talent. He misses assignments, and is technically inconsistent. He can be as good as any guard in the league at times, but this season he has been far from that. And considering it is his walk year, this is a bit of a surprise. Iupati remains solid in the run game, but if you bring pressure against the pass, he can stumble. Additionally, while Jonathan Martin has been solid in place of Anthony Davis (hamstring), it is still smart to come at him and test him from the outset.

Kap has shown he can scramble and do some big things with his arm, but if you can take away the extra time he can create, you can quiet this offense down.

The 49ers defense is short-handed with NaVorro Bowman (knee) and Aldon Smith (suspension) out. The 49ers are generally quite solid on defense, but there are some considerable weaknesses without those two in the game.

Michael Wilhoite is currently replacing Bowman at inside linebacker next to Patrick Willis. The Bears will need to attack him consistently. I suspect Patrick Willis will end up on Martellus Bennett a fair amount, but if the Bears can ever match Bennett up against Wilhoite, they need to exploit that matchup. And that goes for getting Forte out against him as well. I suspect the 49ers will try to hide Wilhoite from such situations, but it is something Cutler will need to keep an eye on.

The lack of Aldon Smith is showing in the pass rush. DT Justin Smith and OLB Aaron Lynch have both been solid, but other than that the pass rush was not particularly good against the Cowboys. The Cowboys found success on the ground as well, but I think that is something the 49ers can work on and deal with in Week 2. They have talent to improve the pass rush, but no Aldon is a glaring loss. If this game remains close and the 49ers decide to send extra guys to make up for the absence of Smith, that will be something for the Bears to exploit.

The Bears have several concerns of note heading into week 1. The first of those is injuries. LG Matt Slauson and C Roberto Garza both suffered high ankle sprains against the Bills, WR Alshon Jeffery suffered a hamstring injury, and WR Brandon Marshall was in and out of the game with ankle issues. Slauson is a more concerning loss than Garza, but having two starting offensive linemen possibly out against a 49ers team that logged multiple sacks against the Cowboys last week is disconcerting.

More concerning, however, would be the availability of Alshon Jeffery.  Jeffery had a breakout season last year, and was often a go-to for Cutler and McCown. Before leaving the game on Sunday, Jeffery had 5 receptions for 71 yards. With him and Marshall firmly on the outside, it opens up Forte out of the backfield and Bennett over the middle. Marshall and Jeffery are also versatile, often moving in and out of the slot as well as on both sides of the field, and their go-up and get-it ability is crucial for Jay.

The other problem for this team is that, with their general west coast offense, they use the pass to set up the run, so if they're not successful early in games, they can get away from the run even more. When they do this, they put the opponent's offense back on the field quickly.  That exacerbates the defensive problems highlighted below.

Their run defense is not very good.

It's a bit glib, but it's absolutely true.  In 2013, the Bears gave up an average of 161 rushing yards per game.  Against the Bills in week 1, they gave up 193 yards. That's an inauspicious start to the new season.

The problem is, though, that the one thing they seem to be having the most problems are misdirections and the read option.  Take a look at these images from the 47 yard run by Anthony Dixon in the 2nd quarter. 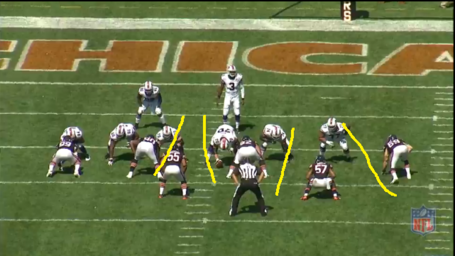 Our quickly drawn yellow lines show the gaps the two linebackers were responsible for on this play.  Just outside the frame on the left, strong safety Ryan Mundy is working his way down the line to the snap, with the responsibility of watching the quarterback/possibly blitzing.

Now here is where the play goes pretty badly: 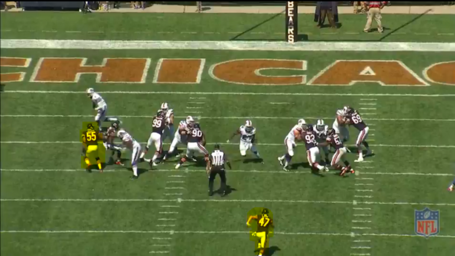 Briggs, who you will remember was responsible for the middle gap, reads the quarterback on the keeper (incorrectly), and completely abandons the middle of the field. That basically leaves FS Chris Conte, who shifted to a single safety look when Mundy moved, with the entire responsibility for stopping a running back who is coming full steam. If Briggs maintains gap integrity, he could theoretically slow Dixon down and allow Conte to come up to help clean it up, but instead, Conte's angle doesn't allow him to wrap up and Dixon flips the field in one play.

This is indicative of a lot of the struggles the Bears are having on defense. Switching into Mel Tucker's system from Lovie Smith's, the linebackers fall into two categories:

Tucker's system seems to be more predicated on using the defensive linemen to occupy linemen, allowing the linebackers to roam. The problem is simply, they're not getting into the right places. This is obviously a concern against a team like the 49ers, who had an explosive running game in 2013 and have the big three needed to exploit the Bears weakness: a Power run gameplan, solid running backs, and a speedy quarterback with an arm in Kaepernick.