Ten Thoughts on the NFL: Cam is on Fire! The Packers are back! Lovie Smith has the Bucs in the playoff hunt!

Check out my Thoughts on the NFL this week!

Share All sharing options for: Ten Thoughts on the NFL: Cam is on Fire! The Packers are back! Lovie Smith has the Bucs in the playoff hunt!

1) I don't think anyone would be mad at a Cincinnati Bengals vs Arizona Cardinals Super Bowl. Both offenses are good, both defenses are good and there are plenty of built in story lines that could carry the 2 weeks between games.

One of those stories; Wasn't 32 year old Larry Fitzgerald supposed to be nearing the end? From 2012 to 2014 Fitzgerald averaged 72 catches and 845 yards. The previous 7 seasons he averaged 91 and 1,262. So naturally most thought his career was on a downward trend, but this year he's already at 73/926 through 10 games. He's on pace for a career high in receptions and a near career high in yards. He's also sitting on 7 receiving TDs with his career high of 13 in his sights.

I know a lot of NFL fans are just waiting for the Bengals to crumble, and with 2 straight losses they aren't exactly getting hot down the stretch, but we'll find out just what kind of team they are if they can bounce back against the Rams this week, but the big test looming is the Steelers on December 13th.

2) Speaking of teams playing good enough to be in the Super Bowl. The undefeated Carolina Panthers boast a high scoring offense and a tough defense. Plus is there anyone more on fire than Carolina QB Cam Newton? 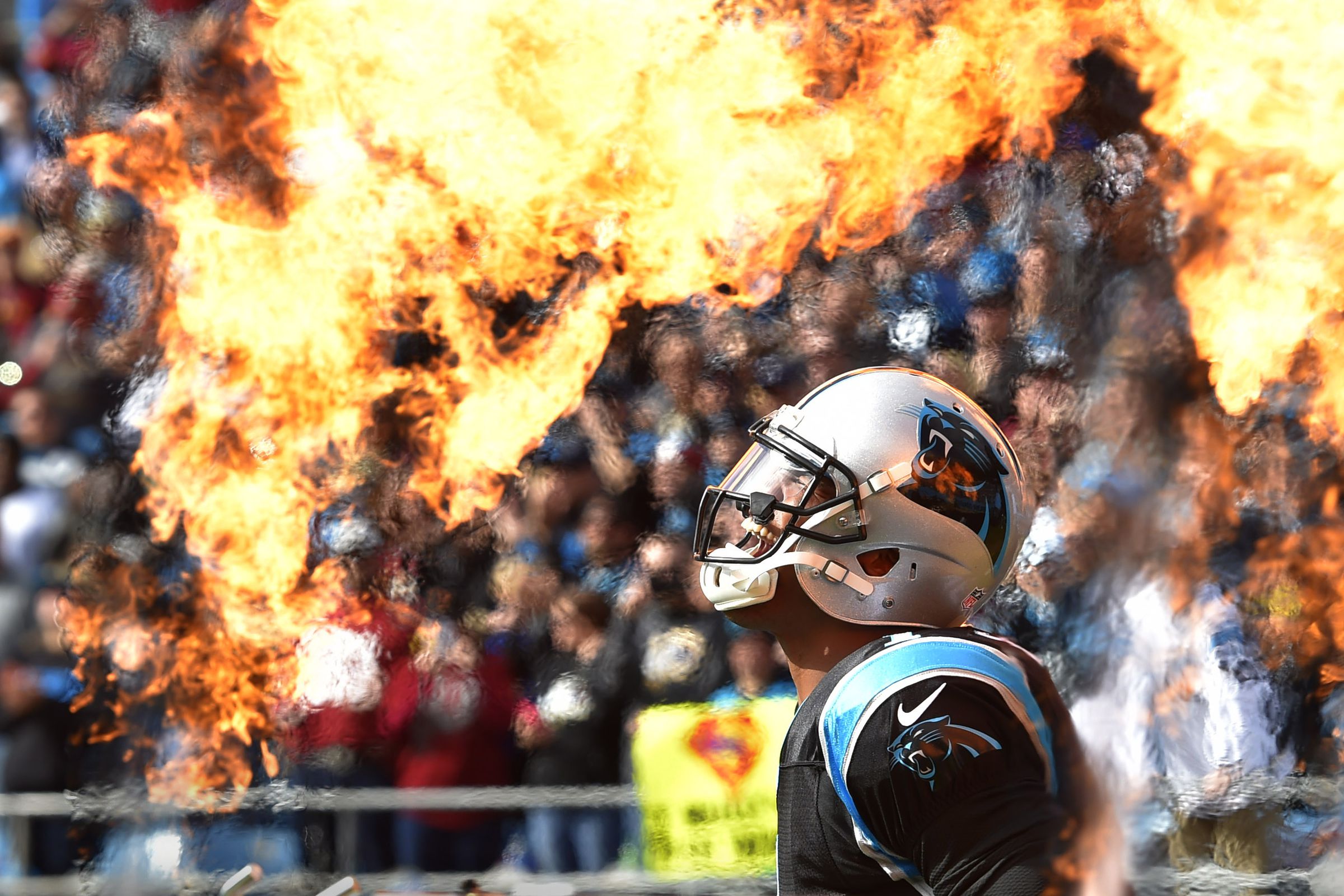 Do you see what I did there?

Newton is a legit MVP candidate, not because his stats are otherworldly, but because he's giving that offense its swagger.

Then again, his stats were otherworldly on Sunday when he threw for 5 TD passes. And you know what that means don't you?

Newton is quickly becoming one of my favorite players.

2a) I get the mystique of Dallas playing on Thanksgiving, but how are the Panthers a one point underdog against the 3-7 Cowboys? Carolina head coach Ron Rivera, who calls the point spread "a little disrespectful," will no doubt play the no respect card to his troops this week.

2b) Speaking of Coach Rivera...

.@RiverboatRonHC says he promised his players he'd do the dab if they played well. @ThomasDavisSDTM held him to it. https://t.co/C5PbHv39N0

3) While I get where Rivera's coming from, this isn't simply a 3 win Dallas team, it's a team that is undefeated with QB Tony Romo in the lineup. Dallas has a fantastic offensive line and a tough defense, and Romo makes their offense click.

4) The undefeated New England Patriots, just keeps on rolling. Even with two key offensive players down (RB Dion Lewis and WR Julian Edelman) and numerous injuries along their o-line, Tom Brady will not be denied. The Buffalo Bills were in Brady's face all night, officially credited with 10 quarterback hits and 1 sack, but Brady just kept standing in the pocket doing Brady-things.

If wide receivers Danny Amendola and Aaron Dobson, who both were hurt on Monday night, miss any significant time, Brady will really be tested.

5) The Green Bay Packers went into Minnesota and reminded the Vikings that they were still the class of the NFC North. Aaron Rodgers completed a season low 47.1% of his passes, but he came through with the big plays seemingly every time he needed to. The Pack also got Eddie Lacy back on track with 100 yards rushing and their defense picked up 6 sacks.

If Lacy is back to playing like he has in the past, and if their defense is rounding into shape, this team will be tough come playoff time. (Boo!)

6) Don't look now, but Lovie Smith has the Tampa Bay Buccaneers in the wildcard mix at 5-5.

His defense has shown flashes this year, but his team is winning with offense. His rookie quarterback, Jameis Winston, also threw 5 TD passes on Sunday and running back Doug Martin continued his comeback season by rushing for 235 yards.

7) I don't usually talk about fantasy football, because I know no one gives a damn about my fantasy team, but on Sunday I managed to pick up the Seattle Seahawks' Thomas Rawls 90 minutes before game time, and he gave me 49 points in one of my leagues.

8) The NFL has a spotter at every game and the job of the spotter is to stop a game in the event they spot anyone with possible concussion symptoms. Lets just assume that watching an entire field proves too difficult for the spotter and he only focuses his attention on the play at hand.

Check out this incomplete pass by Case Keenum.

A gap in NFL protocol let the Rams play Case Keenum through an obvious concussion. This must change. https://t.co/ixmycQ1KsA

If the spotter is only watching the play, he had to have seen Keenum struggle to get back to his feet. But he didn't, so he didn't stop the game.

Keenum's teammates must not have seen him grab at his head or realize how lifeless his body was as they tried to lift him to his feet.

The on field officials must have missed Keenum hitting his head too.

The St. Louis coaches must not have seen Keenum showing visible signs of a concussion either, because they never thought to stop the game.

After the hit, Keenum struggled to get to his feet before speaking to the Rams' trainer, who also must not have seen Keenum wobbly and woozy, because he didn't stop the game either. And before you ask if a trainer has the authority to stop a game, yes he does.

I find it hard to believe that so many people failed to realize what happened on that play. What's more likely is that people realized Keenum wasn't OK, but didn't care enough to act on that knowledge.

Yesterday Rams head coach Jeff Fisher said, "You can not under these circumstances place blame on anybody."

I kind of agree with him, because in this instance, there's plenty of blame to go around.

9) As soon as Johnny Manziel starts to look like a legit option at quarterback for the Cleveland Browns, he goes out and does something stupid. Being recorded at a party drinking alcohol isn't that big of a deal for most players, but for someone that was in rehab during the offseason, this shows a pattern of poor choices for the 2nd year pro.

The Browns, who planned on having Manziel start the remainder of the season, have now demoted him to 3rd string.

Statement from the Browns on decision to start Josh McCown and move Johnny to third on the depth chart pic.twitter.com/CKdBM8vfeA

10) In case you weren't aware, Chicago Bears head coach John Fox made a controversial decision in the 4th quarter of their game on Sunday. It was an aggressive play call, but the prevailing thought is that he should have gone conservative and attempted a field goal instead of going for it on 4th down. At the time of the call, I thought a FG try was the right thing to do, but I understood Fox's thinking in going for the touchdown.

Hindsight tells us he made the wrong decision, but hindsight also shows us every wrong decision a coach ever makes, so the issue some fans have really isn't between being conservative or being aggressive, it's between making the right call and making the wrong call.

What are some of your Thoughts on the NFL this week?