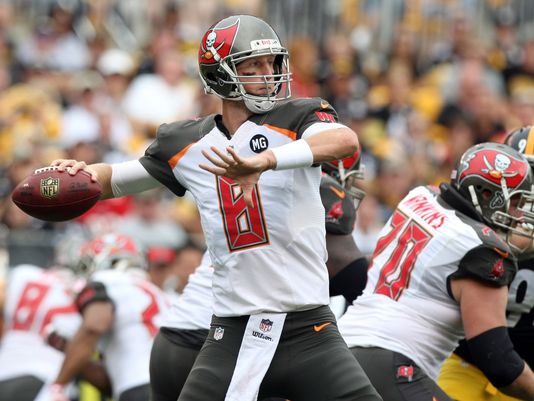 Ho ho ho Bears fans. All we want for Christmas is a new QB, and I’m here to bring some cheer for a change. Instead of hating on Ryan Pace, I’ll ask you to consider this as The Move at QB next year: Mike Glennon. As the link states, he’s an intriguing prospect at 6’6" with a strong arm and decent mobility, and some think he could thrive in a play-action offense around a strong run game, like the Bears possess. Even if you have a low opinion of Glennon, hear me out.

This piece assumes that the Bears choose for Cutler not to return, the likely outcome according to just about everyone who reports on the team. Also, if there’s a QB you like in the draft at the Bears’ first round spot, you take him. End of story.

But many declare that there are no QBs worth a top-5 pick, and maybe not a single QB in this class who projects as a star NFL QB. My POV is that despite that, we can’t just go into 2017 with Barkley, Hoyer, Shaw and Fales as our QBs. We need to invest in the position.

Meanwhile the Bears have a boatload of needs and a boatload of cap space, but you’re not likely to get too far building a team through free agency at multiple positions. You typically don’t build through a free agent QB either, so the idea is that the Bears will use the draft to address QB, and the draft plus free agency to fill the many needs of the team.

Instead, let’s consider flipping the script a bit: Let’s use the draft to fill as many needs as we can (we could go secondary all 7 picks and not be too far off), and use those free agency dollars on the top QB available in Glennon, and bring him in to compete with Matt Barkley. You’d have two guys with spot starting experience and high pedigrees competing against each other, the best man wins and the next guy backs him up. You’d have to make the competition legit, giving both time with the ones and the twos.

All of this gives you another QB prospect as good as any you’ll find in this year’s draft (IMO) but without using up a valuable draft pick on him. Typically, you have to find your QB in the draft, but other teams’ backups have gone onto successes in the right situation. It just costs money, which the Bears have plenty of right now. I believe either QB could reveal himself to be The QB for the Bears moving forward. Doesn’t mean he’s going to be a star but someone we could potentially win with if the other parts of the team are strong enough. It’s also quite possible Glennon is not a good QB, as many hold that opinion. But that’s why you have him compete with Barkley. Best case, you have two good QBs. After a year or two of using him to back up the starter, the Bears could potentially trade that backup for assets. Worst case, neither guy is really a starter, and then you draft a QB next year when there is supposed to be a better crop to choose from. Sounds great, right?

I think it would be, but the devil is in the details, and getting it done would take some creativity and some luck. The trick would be what you’d do for a contract for Glennon and to make it even trickier, Barkley also needs a new contract. Glennon is probably looking for an Osweiler-style multi-year contract at big bucks and more critically, a guaranteed starting spot. But I don’t know, will any team really give him that to him or just hand him a starting role, especially after the Osweiler results? Let’s put it this way: I wouldn’t and hope the Bears wouldn’t. Because it only takes one team stupid enough to do it in a QB-desperate league, all of this is probably a long shot.

However, if no one wants to step up with a huge contract, what the Bears could do is give both he and Barkley 3-year contracts, maybe in something like the $8-10MM per year range with incentives for starting. Maybe the starter ends up making $12MM while the backup gets $8MM, something like that. Neither guy would be satisfied with "only" $12MM to start and the Bears might not be thrilled to spend $20MM at the position without an identified star, so both contracts would have to be short, like 2-3 years, with guaranteed money up front and some kind of "out" after two years, maybe a third year mutual option. Glennon would be given good money and a legitimate shot at a starting job, competing against a former 4th-round pick. Getting $15-20MM over 2 years could hardly be considered a waste of his time and it might very well be the best he can do.

Even after you bring in Glennon, if there’s a QB available when the Bears are drafting, take him. But if not, now you really don’t have to this year at all, and can wait until next year. However, if you don’t bring in Glennon, or don’t bring in another legit starting prospect (Hoyer is veteran insurance, not a legit starting prospect), then I think the Bears are forced to draft someone and to get a better prospect than Glennon, they probably have to do it in the first or second round. That’s a lot to give up. I’d rather see the Bears just spend money.

That's the heart of this idea: You need to address the QB position but instead of using a high draft pick in a lackluster draft, just throw money at the best available FA prospect. Either way, you get a questionable prospect but with what I'm proposing, you retain all your picks to address other needs.

Would you be excited about seeing Mike Glennon competing with Matt Barkley? Would you be willing to throw $20MM at the position in hopes that one of the two could emerge as our starting QB of the future, or do the Bears need to look elsewhere?